The Daily Beast's Samantha Allen shares this story about The Satanic Temple's (TST) efforts to combat anti-abortion legislation around the country. Recently, several members of Detroit's local chapter travelled to Ann Arbor, Michigan to stage a "Sanctions of the Cross" procession, a 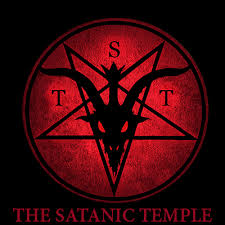 performance meant to satirize an anti-abortion group's "Ways of the Cross" protest in which members "kneel outside abortion clinics...and pray for 'victims' of abortion, moving through the twelve stations of the cross." Allen writes:

At the counter-protest, Satanic Temple members walked behind the cross-bearing [chapter director] wearing suits bearing the names of the Michigan legislators who sponsored the recent anti-abortion bills. Behind them, an activist wore a leather jacket emblazoned with a middle finger and held up a grayscale American flag.

The Satanic Temple—especially the Detroit Chapter—has a history of counter-protesting religious displays and anti-abortion protests. In 2014, for example, they displayed a “Snaketivity” on the lawn of the Michigan Capitol building in response to the nativity scene being permitted on government property.

In 2015, they counter-protested anti-abortion Planned Parenthood picketers in Ferndale[, Mich.] with a theatrical display in which men dressed as priests poured milk over bound women kneeling in front of the clinic, resulting in the extraordinary Michigan Live headline: “Detroit-area Satanists doused with milk at Planned Parenthood protest.”

The religious organization filed state and federal lawsuits over Missouri’s mandatory 72-hour pre-abortion waiting period, which is one of the longest in the country. Their legal argument, as Vice reported, borrowed heavily from the Hobby Lobby decision by claiming that they should be permitted to claim a religious exemption from the abortion restriction. The move sparked outrage among anti-abortion activists.

In case you're wondering what TST's all about, here's a brief description from the group's website:

It is the position of The Satanic Temple that religion can, and should, be divorced from superstition. As such, we do not promote a belief in a personal Satan. To embrace the name Satan is to embrace rational inquiry removed from supernaturalism and archaic tradition-based superstitions. The Satanist should actively work to hone critical thinking and exercise reasonable agnosticism in all things. Our beliefs must be malleable to the best current scientific understandings of the material world — never the reverse...

Satan is symbolic of the Eternal Rebel in opposition to arbitrary authority, forever defending personal sovereignty even in the face of insurmountable odds. Satan is an icon for the unbowed will of the unsilenced inquirer… the heretic who questions sacred laws and rejects all tyrannical impositions. Ours is the literary Satan best exemplified by Milton and the Romantic Satanists, from Blake to Shelley, to Anatole France.

The protesting appears to have been entirely peaceful on both sides.