The title of this post was inspired by this Legal Intelligencer article highlighting a recent Third Circuit decision in which the court found that a school could not ban “I ♥ boobies” bracelets because they are not "plainly lewd." The Intelligencer reports: 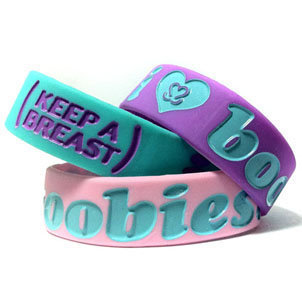 In the case of B.H., the issue before the Third Circuit court was whether Fraser would apply to the Easton Area Middle School principal’s decision to ban purported breast cancer awareness bracelets containing the phrase “I ♥ boobies! (Keep A Breast).” Around mid-September 2010, following incidents of boys taking the “I ♥ boobies” bracelets as an entrée to discuss girls’ breasts, Easton Area Middle School principals instructed teachers that the “I ♥ boobies” bracelets violated the school district dress code, and thus must be banned. In October 2010, the Easton Area School District celebrated a district-wide Breast Cancer Awareness Day. On that day, middle school students R.T., B.H. and K.M., in deliberate defiance of the ban, wore the “I ♥ boobies” bracelets to school. When the assistant principal asked the girls whether there was any other way they could show their support for breast cancer awareness, B.H. and K.M. refused to remove the bracelets. R.T., however, agreed to remove her bracelet and admitted that middle school boys used the bracelets as an entrée for sexual harassment. For their defiance of the ban, B.H. and K.M. received in-school suspension and were barred from the school’s “Snowball Dance.” Their mothers filed suit against the school district.

On a motion for preliminary injunction filed by the plaintiffs, the U.S. District Court for the Eastern District of Pennsylvania declined to apply Fraser, which would have allowed the school district to ban speech that it reasonably deemed vulgar, lewd, or profane. Conducting an analysis that was more etymological than contextual, the district court concluded that there was nothing inherently sexual about the term “booby,” a word that could mean a “stupid fellow” or “a type of seabird.” Because of the perceived multiple meanings of the “I ♥ boobies” phrase, the district court concluded that the school district’s finding of vulgarity lacked a reasonably objective basis and, accordingly, applied the Tinker “substantial disruption” analysis. Finding no evidence of disruption, the district court precluded the school district’s enforcement of its ban on the bracelets. The school district appealed to the Third Circuit, arguing that Fraser and its progeny provide no precedent for the district court’s non-contextual, etymological analysis of the “I ♥ boobies” phrase. On the contrary, however, plaintiffs argued that the Eastern District court properly applied the Tinker standard.

Ultimately, the Third Circuit concluded that the school district’s decision to ban the “I ♥ boobies” was not supported by Fraser. To arrive at this conclusion, under the “narrowest grounds” doctrine, the Third Circuit applied the language of Justice Samuel Alito’s concurrence in Morse to modify the Fraser standard. Alito, issuing a concurrence with both the Morse majority opinion and holding, opined that the school district prerogative to regulate pro-drug speech should not be extended to student political speech. Notwithstanding Alito’s complete concurrence, the B.H. majority applied Alito’s opinion as a binding limitation on Fraser. Accordingly, the Third Circuit placed a new interpretation on Fraser that, absent substantial disruption, school principals may only ban speech with a “plausibly political or social” message when the language of the speech is “plainly lewd,” a determination that should be made by the courts. As an example of patently offensive language, in the case of Federal Communications Commission v. Pacifica Foundation, 438 U.S. 726 (1978), the court concluded that comedian George Carlin’s “Seven Dirty Words” monologue contained language that “offends for the same reasons obscenity offends.” These words, according to the B.H. majority, may be categorically banned from the schoolhouse, regardless of political intent.

Update: If you have not come across George Carlin's "Seven Dirty Words," you can finding it here (superfluous warning:  contains strong language).

Listed below are links to weblogs that reference Third Circuit finds middle schoolers’ “I ♥ boobies” bracelets protected by First Amendment.: