The BNA's WTO Reporter reports as follows (below is just an excerpt):

China's government is less involved now than in the past in attempting to influence decisionmaking in various sectors of the economy, the International Trade Commission found in a report released April 10.

The report, China: Description of Selected Government Practices and Policies Affecting Decision Making in the Economy, is the first of three requested by the House Ways and Means Committee. In the first report, the committee asked the ITC to describe practices and policies China's central, provincial, and local government bodies use to influence decisionmaking in the economy, including in the manufacturing, agricultural, and services sectors.

A PDF copy of the report (Investigation No. 332-492, USITC Publication 3978, December 2007) is available here. You can also get a copy by sending an e-mail request to Pubrequest@usitc.gov.

Human Rights Watch has just published a report on lawyers in China. Here are two ways of getting it: HRW web site | download from this site.

The report is available here.

Here's the latest issue of the AJCL, containing several articles related to Chinese law. Downloads are free, but registration is required.

Here's the latest issue of China Human Rights and Rule of Law Update, the newsletter of the Congressional-Executive Commission on China [PDF from this site | HTML from CECC site]. 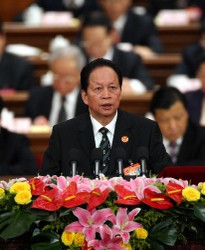 The link is here.

UPDATE March 11, 2008: This is not the actual full text of the report as delivered; it's a truncated version. The full text should be available after the NPC meeting is over.

China: Creating a Legal System for a Market Economy

I recently posted a paper with the above title on SSRN; it can be downloaded here: http://ssrn.com/abstract=1097587. It's a pre-publication version of a somewhat shorter piece that has appeared in the China Quarterly (the full reference is in the paper).

Since the early 1990s, China has come a long way in legislating the foundational rules for its reformed economy. Virtually all of the important areas - contracts, business organizations, securities, bankruptcy, and secured transactions, to name a few - are now covered by national legislation as well as lower-level regulations. Yet an important feature of a legal structure suited to a market economy is missing: the ability of the system to generate from below solutions to problems not adequately dealt with by existing legislation. The top-down model that has dominated Chinese law reform efforts to date can only do so much. What is needed now is a more welcoming attitude to market-generated solutions to the gaps and other problems that will invariably exist in legislation. The state's distrust of civil-society institutions and other bottom-up initiatives suggests, however, that this different approach will not come easily.

Shuanggui and extralegal detention in China

Flora Sapio of the Institute for Cultural Studies, Julius Maximilian University in Germany has just published an excellent article on shuanggui (双规), a form of extralegal detention by Party disciplinary bodies. The article is very well researched; she has found lots of relevant documents, many of which are probably not, strictly speaking, public.

Shuanggui poses a challenge to our understanding of the Chinese legal system. It is frankly admitted by just about everyone involved to be unlawful - in the Chinese system, all forms of detention must be authorized by law passed by the National People's Congress or its Standing Committee, and shuanggui has no such authorization. Yet it is open - the existence of the system itself is not a state secret - and pervasive. Thus, it cannot be dismissed as a mere aberration; a proper understanding of the system has to account for shuanggui as a constitutive element, not a mistake.

For the last few years, Knut Benjamin Pissler of the Max Planck Institute for Foreign Private Law and Private International Law in Hamburg has compiled an annual bibliography of Western-language works on Chinese law. These bibliographies have been published in the Zeitschrift fuer Chinesisches Recht/Journal of Chinese Law published by the German-Chinese Lawyers Association.

Benjamin is currently working on the 2007 edition, and I will post that shortly. I recently realized, however, that I had never posted the last two years' editions. They are below.

The English text can be found here; the Chinese text is here.

UPDATE: The English text posted by the Chinese government requires you to do to 21 separate web pages to view the whole thing. Here are downloadable texts in English [Word | PDF] and Chinese [Word | PDF].

The latest issue of the CECC's "China Human Rights and Rule of Law Update" is available in HTML here. A PDF version is available here.

China Labour Bulletin, a worker rights organization based in Hong Kong, has just published a report on the Chinese labor movement from 2005 to 2006. The introductory blurb is below. The full text of the report is here.

Here's an interesting game-theoretical analysis of public protest in China. The author, Peter Lorentzen, argues that such protests do not necessarily indicate regime weakness; instead, they are tolerated (in some cases) because they can increase the government's effectiveness. Here's the abstract:

The occurrence of protests in authoritarian countries is often seen as a harbinger of regime collapse. Yet China since the 1990s has seen a significant rise in popular protest while maintaining economic growth and its reform trajectory. Furthermore, the Chinese government has shown its ability to effectively suppress dissent when it chooses to. This paper argues that deliberate toleration of narrow economic protests serves the Chinese government's purposes in two ways. First, it allows the government to identify and defuse discontented groups. Second, it provides a useful signal of local government corruption that can be used to supplement and direct limited administrative monitoring resources. This mechanism has become particularly useful to the government of contemporary China as the processes of decentralization and market reform have made identification and investigation of local corruption more difficult.

The Congressional-Executive Commission on China issued its 2007 annual report last week. Here are some relevant links:

"Brits Get Rich in China"

"Brits Get Rich in China" is a documentary on the efforts of some British businessmen to ... well, the title says it all. Catch it on Youtube in 7 10-minute parts. Thanks to China Digital Times.

On Sept. 25, Supreme People's Court Vice President Wan Exiang (万鄂湘) addressed the OAS in Washington, DC. Here's an outline and a video of his speech.

The latest issue of the China Quarterly is devoted to the Chinese legal system. All articles are available on-line and may be downloaded here.

The China Labour Bulletin, Han Dongfang's Hong Kong-based NGO, has just issued an English-language report on child labor in China. It is a revised and updated version of a Chinese-language report issued last year.

Given the current almost toxic zeitgeist about all things Chinese (at least inside the Beltway, where I live), it's important to stress that the CLB is a serious organization that produces high-quality and credible work. This is not just more China-bashing. Indeed, the report acknowledges the complexity of the issue at the very beginning:

Child labour in any society poses a complex challenge, one simultaneously ethical, legal and economic in nature, and China is no exception to this rule. The income generated by underage workers is often critical to a family’s overall livelihood, especially in the poorer rural areas from where most such workers originate, and so identifying “culprits” who can be suitably punished under the law is not always the best way to proceed. Indeed, except in the most egregious of cases,6 the sternly punitive approach may even be counterproductive, both by forcing this sector of the economy further underground and by pushing underprivileged families – and hence the children themselves – deeper into hardship and poverty.

Here's the latest issue of the China Law Reporter, published by the China Committee of the ABA's Section on International Law.

Here's the latest issue (in Word format) of the newsletter of the (German) GTZ Legal Advisory Service. More information is on their web site. Incidentally, they are always looking for interns; see the last page of the newsletter. English is required; Chinese is desirable; German is not required.