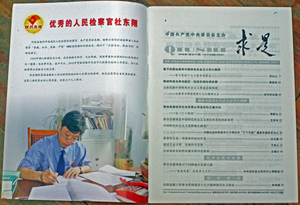 A colleague who wishes to remain anonymous has kindly directed me this Flickr site where he/she maintains a fascinating archive of photos from China relating (mostly) to state efforts to propagate knowledge about the legal system.

The origin of ping pong

I started this blog with the intention of making and keeping a promise to readers that I would blog only about Chinese law and not waste their time with self-indulgent ramblings on other topics. I'm going to go off topic here, but only to present something that will be of interest to all sinologists: a marvelous account of the origins of ping pong by Alice Lyman Miller of the Hoover Institution (posted here with permission) that might otherwise never be broadly circulated.

Here is a somewhat ghoulish set of photographs posted on the Duowei forum site entitled "The Execution Process of Beautiful Capital Convicts" (美女死刑犯被处决过程). I can't vouch for their authenticity or even their approximate dates. I post them with a bit of hesitation, but if they are authentic then their informational value outweighs their prurient appeal.

JULY 19th UPDATE: Flora Sapio, an expert in this field, has some comments that are too important to be left, probably unnoticed, in the "Comments" section:

Somewhat ghoulish but very interesting nonetheless. Difficult to tell the genuine from the fake ones. Some of them raise some doubts. For instance, some of the people portrayed wear PAP uniforms. To my knowledge, the PAP seldom parades criminals. Besides some of the women in the pictures are simply too well dressed, while others look too relaxed. Also notice the "binding technique" that they used on the criminals. Too complicated. Compare it to the one that can be seen in pictures published by the Renmin Ribao and other official websites. Don't know. It would require a bit of time analyse these pictures. Also, one would need to known when they were taken, and in which province.

Last week I posted here on Chinese LLM degrees for foreigners. As some useful comments have come in response to that, I'm posting a revised document; please use this one (Version 2) instead.

May 25, 2008 in Commentary, Fellowships/Research Opportunities, Other, People and Institutions | Permalink | Comments (1) | TrackBack (0)

Some time ago, a discussion on the Chinalaw list about LLMs for foreigners (typically English-language) offered by Chinese institutions prompted me to ask for those with views on the subject to write to me so I could assemble a document that would answer questions that often came up.

MAY 26 UPDATE: I have posted a revised document here.

May 21, 2008 in Commentary, Fellowships/Research Opportunities, Other, People and Institutions | Permalink | Comments (2) | TrackBack (0)

J. Clifford Wallace, Senior Judge of the US Court of Appeals for the Ninth Circuit, will speak and lead a discussion on judicial reform in China at Jones Day's New York office on May 13. More information here.

Where Chinese judges get their hair cut 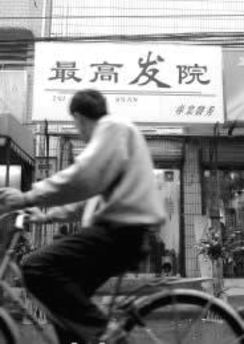 Who's visiting this blog?

The hit counting service for this blog provides statistics on where visitors come from. As expected, the United States accounts for the plurality (as well as the majority) of visitors: 52%. But second place goes to Hong Kong: 12%. After that comes Canada (6%), France (5%), and Australia (3%). Belgium, the UK, the Netherlands, and Sweden each account for 2%.

The really interesting numbers come when you adjust for population, though. In terms of hits per 1,000,000 of population, here's the ranking:

It's not surprising that Hong Kong would be a center of interest in Chinese law, but what's going on in Sweden and Belgium? Comments welcome (especially from Swedes and Belgians).

UPDATE: As one of the comments points out, the absence of China from this list is probably because this blog is blocked in China.

For the next two weeks, I won't be blogging much on this site; I'll be a guest blogger at the Conglomerate blog. My first post there is here.

A conversation between the ruler and the ruled

Here's an interesting account by Ma Shaofang, one of the student organizers of the 1989 Tiananmen hunger strike and now a businessman in Shenzhen, of a recent conversation over a mandatory "tea" with some agents of the Ministry of State Security. Thanks to China Digital Times for the translation.

Here's an interesting site that purports to tell you what level of education is required to read particular blogs. Try inputting this blog's URL (http://lawprofessors.typepad.com/china_law_prof_blog) and give yourself a pat on the back, Einstein.

Actually, I'm not proud of it; it's not my desire to be obscure. I think there's a lot to be said for the view of the quotation offered by Eugene Volokh of the Volokh Conspiracy (rated Junior High School reading level): "Think with the learned, and speak with the vulgar."

Every so often people ask me for a list of foreign law firms in China. Here's one I recently came across, thanks to a posting by David Atnip on the Chinalaw list.

I have been asked to post the following announcement. Apparently papers on China are considered "international law" and thus welcome.

The Yale Journal of International Law (YJIL) is accepting submissions
for its Young Scholars' Conference, which will take place on March 1,
2008. The Conference aims to encourage scholarship in international
law among current J.D. students by giving them an opportunity to
present a paper and receive feedback from distinguished professors in
the field. The Conference will include panel presentations of student
scholarship, a roundtable discussion on careers in legal academia, a
keynote address, and a closing dinner. Two of the papers presented at
the Conference will be selected for publication in YJIL. Support for
the Conference has been provided by the Oscar M. Ruebhausen '37 Fund.

YJIL will accept papers of no more than 15,000 words (including
footnotes) on topics in international law from current J.D. students.
Papers that have previously been published will not be considered.
Presenters must be able to travel to New Haven, CT, for a full day of
events on March 1, 2008. YJIL will provide presenting students with
accommodations and cover up to $200 of their conference-related travel
expenses.

Submissions, accompanied by author's c.v., should be sent to
yjil.conference@yale.edu.

Here's an item from the ABA's China Law Committee listserv:

Kara Phillips, a long-time Committee member and contributor to the China Law Reporter, recently coordinated the contribution of over 300 English language law books to Shanghai Jiaotong University (SJTU) Law School. The article at http://www.llrx.com/features/shanghaiexpress.htm describes the process Kara used to coordinate the contribution, and is an excellent primer for those considering similar contributions. Please take a look.

I'm looking for information about Hsiang Che-chun (pinyin Xiang Zhejun 向哲浚), who was the Chinese prosecutor in the Tokyo Trials. If you know anything about him, or know of people or resources that might be helpful, please send me an e-mail (dclarke at law dot gwu dot edu) to let me know. Thanks.

This is an unsolicited announcement about the Chinese Law and Policy Review, an online journal run by students at the Univ. of Pennsylvania Law School. Its unique claim to fame (of course it no doubt has others) is that it publishes all its articles in both Chinese and English; original submissions may be in either language. For more information, check out its Web site.

Call for papers: conference of the European Association for China Law Studies

Here is an edited version of an announcement I recently received:

The Second Conference of the European Association for China Law Studies is bringing together legal scholars from Europe and other countries around the world.  This conference series will serve as a meeting point for the research and teaching of Chinese law, an informational exchange among those involved in organizing China law studies, and a forum for developing individual research projects.

Authors are invited to submit abstracts before January 15, 2007.  The abstracts should be submitted as an email attachment sent to Dr. Knut Benjamin Pißler (Max Planck Institute for Comparative and International Private Law, Hamburg/Germany, pissler@mpipriv-hh.mpg.de) or to Professor Christiane Wendehorst (Sino German Institute for Legal Studies, University of Göttingen/Germany, cwendeh@gwdg.de). The preferred format is MS Word.

The abstract should include:
- the title of the paper,
- full names of the author(s), their institutions, and email of the corresponding author,
- up to one page of text summarising the main contents of the proposed paper.

The full-length papers presented at the conference will be published.

CECC roundtable on "China's National and Local Regulations on Religion"

I have received an announcement from the CECC (slightly edited) as follows:

The Congressional-Executive Commission on China will hold another in its series of staff-led Issues Roundtables, entitled "China's National and Local Regulations on Religion: Recent Developments in Legislation and Implementation," on Monday, November 20, from 2:00 p.m. to 3:30 p.m. in Room 2200 of the Rayburn House Office Building, Washington, DC.  All CECC hearings and Issues Roundtables are open to the public and the press.

On March 1, 2005, the State Council's Regulation on Religious Affairs (RRA) entered into force, representing the first comprehensive national regulation devoted to religious issues.  This Roundtable examines the interplay between the national RRA and local regulations and discusses the practical impact of such regulations on freedom of religion in China.

I have received the following announcement:

The Chinese (Taiwan) Yearbook of International Law and Affairs
commenced publication in 1981 under the auspices of the Chinese
(Taiwan) Society of International Law. The Yearbook publishes on
multi-disciplinary topics with a focus on international and
comparative law issues regarding Taiwan, Mainland China and
cross-strait relations. In addition, the Yearbook is considered to be
one of the foremost publications in the world concentrating on issues
of greater China.

Getting into a China-related law practice

Many people wonder how to get into a law practice that focuses on China. Here are some recent postings on the subject: