More contempt for law from the lawmakers

Over the last month or so, the Chinese authorities have been engaged in a crackdown on rights lawyers of unprecedented ferocity. Here's Jerome Cohen in a Wall Street Journal article about it:

New York University law professor Jerome Cohen, one of the first American lawyers to work in China after the country opened up in the late 1970s, described the sweep as “insane.” China’s leaders “must be in desperate straits to engage in this extraordinary, coordinated attack on human-rights lawyers,” he said.

Strong words! In any case, after all that stuff at the Fourth Plenum about the rule of law and exercising power within a cage, you might think that the authorities, with the power to make law completely in their hands, would manage to abide by it, right? Wrong. There are of course many stories about lawyers and others being rounded up without proper procedures, but today I came across a particularly glaring example that exists in black and white and cannot be denied or explained away.

Take a look at the document below: it's a notice of "residential surveillance at a designated place", i.e., so-called residential surveillance where the police hold you at some place that is neither a nail nor your residence -- and we're not talking about a fancy hotel here. The suspect is the lawyer Xie Yuandong, and the suspected crime is that of "stirring up trouble". 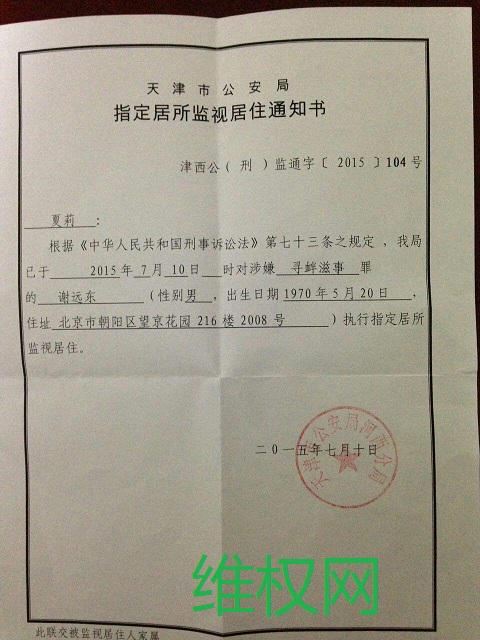 The problem with all of this is that under Article 73 of the Criminal Procedure Law, which reflects a 2012 amendment designed to reduce police abuses of this procedure, "residential surveillance at a designated place" may be imposed on a suspect only for three crimes: “Where there is suspicion of the crime of endangering national security, the crime of terrorist activities, or the crime of receiving bribes in serious circumstances, and implementing residential surveillance at the suspect's residence could hinder the investigation, then upon approval by the next higher people’s prosecutor’s office or public security authority, residential surveillance may be implemented at a designated place of residence[.]" (对于涉嫌危害国家安全犯罪、恐怖活动犯罪、特别重大贿赂犯罪，在住处执行可能有碍侦查的，经上一级人民检察院或者公安机关批准，也可以在指定的居所执行。)

Thus, placing Xie in residential surveillance at a designated place is an open-and-shut violation of the Criminal Procedure Law and is nothing more than kidnapping. Of course, the whole problem could easily have been avoided had the authorities had the wit to fill in the blank for the suspected crime with one of the eligible ones. But this is exactly the point: the law means so little to them that they can't be bothered to understand or follow it even when it would be easy to do so.