The Chinese government often complains the criticisms of its human rights record are hypocritical. After all, aren't there a lot of problems in Western countries, too? (Typically, the U.S. is always singled out as the representative of "the West"; probably it's just a target-rich environment, as they say.) This complaint is flawed for two reasons, the second of which I'll address here.

The second reason that the complaint about hypocrisy is flawed is that even if the critic is being hypocritical, so what? This does not wash away the rights violation or make the victim feel any better. If you care about human rights, the question should always be "Does the criticism make the situation better?", not "Is the critic a hypocrite?"

Exhibit A in this argument is the text accompanying an exhibit at the National Civil Rights Museum in Memphis. 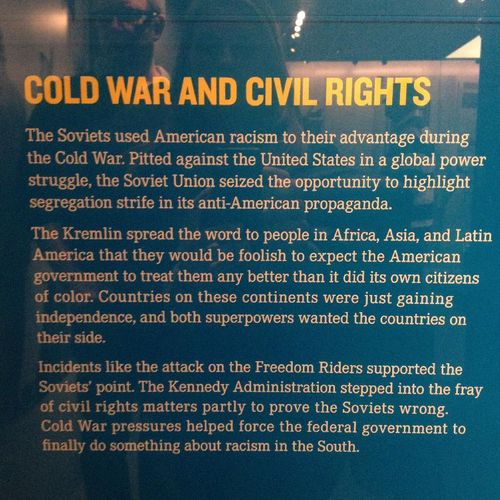 It explains how the Kennedy administration's actions to advance civil rights were stimulated at least in part by Soviet propaganda that made the US look bad. Were the Soviets hypocrites who didn't actually care about human rights? Judging by their own record, the answer is obviously yes. Would the world, and the civil rights movement in the US, have been better off if they had kept their mouths shut about racist abuses in the US? Obviously (to me, anyway), no. When you're criticized for doing bad stuff, you have two options: deny the criticism, attack the critic, and hide the bad stuff, or just stop doing the bad stuff.