Murong Xuecun returns to China, asks to be arrested

Last May, the writer Murong Xuecun (慕容雪村, real name Hao Qun 郝群) published an op-ed in the New York Times protesting the arrest of Pu Zhiqiang and others for "stirring up trouble and provoking disturbances" and announcing his intention to turn himself in upon his return from Australia. Today (or perhaps yesterday - the statement is undated) he made good on his word, issuing a Statement of Surrender. Here's the Chinese text, followed by my translation. 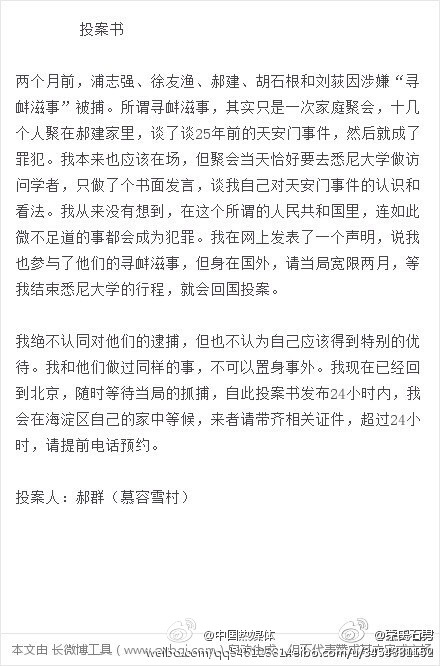 Two months ago, Pu Zhiqiang, Xu Youyu, Hao Jian, Hu Shigen, and Liu Di were arrested on suspicion of “stirring up trouble and provoking disturbances.” This so-called “stirring up trouble and provoking disturbances” was in fact nothing more than people getting together at home: some ten-odd people met at Hao Jian’s home and discussed the Tiananmen Incident of 25 years earlier, and this became a crime. I was supposed to have been there, but on the day of the meeting I was to go to the University of Sydney to be a visiting scholar, so I made only a written declaration stating my own views of the Tiananmen Incident. I never imagined that in this so-called People’s Republic even this kind of trivial incident could become a crime. I made a declaration on the internet stating that I also participated in their stirring up trouble and provoking disturbances but was currently abroad, and asked the authorities to please wait for two months until I had finished by trip to the University of Sydney, when I would return to China and surrender.

I in no way accept the arrest of these people, but also don’t feel that I should get some special treatment. I did the same thing that they did and cannot stay outside of the matter. I have already returned to Beijing and await arrest at any moment. For the next 24 hours after issuing this statement of surrender, I will be waiting in my home in Haidian District, and request that those who come bring the appropriate documents. After 24 hours, please telephone in advance to arrange a time.