Why Chinese needs a good word for "irony", and why it's too soon to bid farewell to re-education through labor

I'm not one of those people who says that people whose language doesn't have a word for X can't conceive of X - after all, somebody conceived of the smartphone before there was a word for it - but it's really too bad Chinese doesn't have good word for "irony". Most ways of expressing the idea of irony in Chinese involve using the same term that's used to express the idea of satire (讽刺); they are serviceable in context, but hey, so is a sparkling wine when you really need champagne. Some situations just cry out for the perfect mot juste and not a clumsy workaround.

I was moved to this thought upon seeing (H/T: David Cowhig) this notice issued to a petitioner, apparently just a few days ago (full Chinese text and English translation appended at the end of this post): 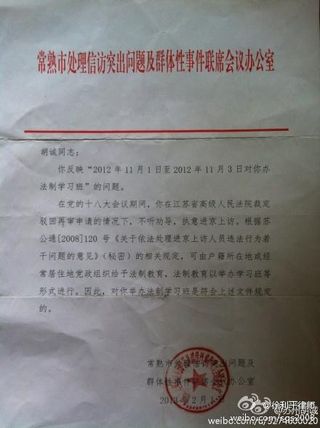 The notice is issued by a department of the Changre [CORRECTION: should be "Changshu"] municipal government in response to a complaint by someone named Hu Cheng that he was detained for two days under the rubric of "legal study class". The notice informs him that it's because he insisted on going to Beijing to petition during the 18th Party Congress, and that his detention under this rubric was justified under a document issued by the Jiangsu Province Department of Public Security. The notice helpfully adds that the document is secret.

The idea that the authorities behind this notice and document it refers to can teach Mr. Hu about legality offers, to use a seasonal metaphor, a whole cornucopia of irony. First, it is not illegal for Chinese citizens to go to Beijing to petition. Second, it is a bedrock principle of Chinese law that the liberty of the person may not be restricted - it doesn't matter whether you call it punishment, study class, whatever - except as authorized by a law passed by the National People's Congress or its Standing Committee. (Law on Legislation, Art. 8(v); that's one reason why re-education through labor, with its flimsy statutory basis, has been under attack.) Third, even if the Jiangsu Department of Public Security had the authority to issue regulations providing for the compulsory restriction of personal liberty (which it doesn't), it is another bedrock principle of Chinese law that administrative punishments of this kind must be justified by publicly available documents. You can't say, "Hey, we can lock you up, but we can't show you the basis for out authority - just trust us!"

This has implications for the much-trumpeted imminent abolition of re-education through labor (RETL) that was announced in the Decision of the recent 3rd Plenum. The abolition of RETL, while advocated by many in the legal community for years, has been long delayed because it seems the public security folks are just too loathe to give it up. They like the informality and unaccountability it offers. When the Decision came out, many wondered: can this really be true? Will it not just re-appear in another form?

"Study class" may be that other form (although it is unlikely to last as long as RETL sentences, which can be up to three years plus an additional year in some circumstances). I was at a conference just a week or so ago at which one of the attendees recounted his conversation with a Supreme People's Court judge on this very subject, and the judge said that people freed from RETL might just go into legal study classes. One should never underestimate the ability of the public security bureaucracy to think of new names for holding people without statutory authority. The fault, though, does not really lie with the police. They're just doing what police do. The fault lies with the system that allows creative re-naming to become a successful strategy, and fails to enforce the simple rule that restriction of personal liberty requires a statute from the NPC or its Standing Committee.

Text of Notice and Translation

During the period of the Party’s 18th Congress, when the Jiangsu Higher-Level People’s Court rejected your application for a re-trial, you did not listen to persuasion but stubbornly insisted on going to Beijing to petition. According to the relevant provisions of the Jiangsu Province Department of Public Security Notice No. 120 (2008) entitled “Opinion on Several Issues Relating to Handling According to Law the Unlawful Behavior of Persons Who Go to Beijing to Petition” (Secret), legal education may be imposed by Party and government organizations of the petitioner’s domicile or place of usual residence. Legal education shall be carried out through the implementation of study classes and other means. Therefore, implementing a legal study class upon you is in accordance with the stipulations of the above document.

The city is 常熟, not 常热. An understandable mistake given the grainy image from Weibo!

Ack. I'm embarrassed. It wasn't THAT grainy. No excuse.