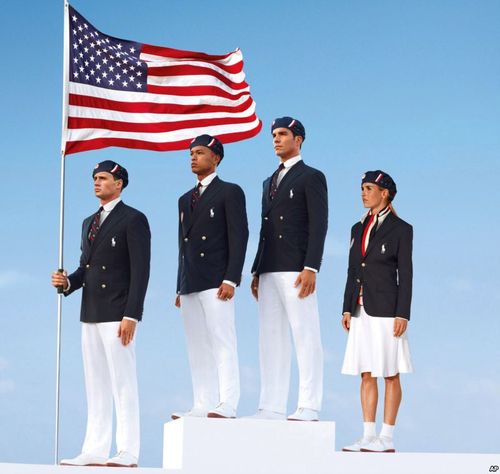 Many bloggers have already written about the posturing of certain of our elected representatives on the issue of China-made clothing for US Olympic athletes, using various permutations of the word “idiot” (e.g., Daniel Drezner, “idiocies like the Olympic-uniform controversy”; Stan Abrams, “US Olympic Uniform Idiotfest”).

For readers who have been in news-free zone for the last few weeks, the controversy erupted when it was reported that Ralph Lauren, the supplier of parade uniforms for the US team, had contracted the job out to a Chinese manufacturer. (Too bad they didn’t contract out the design to someone else, too.) Quick off the mark with some really delightful imagery was Senator Harry Reid, who huffed, “I think they should take all the uniforms, put them in a big pile and burn them and start all over again.” The next day, a resolution was introduced into the House expressing disapproval of the decision to purchase Chinese-made uniforms and urging the SOC to source domestically in the future. And on the same day, six senators, apparently idle because of the lack of serious problems facing the United States, announced they would introduce legislation requiring the US Olympic Committee to source the ceremonial uniforms domestically. That legislation, the Team USA Made in America Act of 2012, was duly introduced into the Senate and referred to committee on July 16.

No doubt thoroughly panicked, the USOC went into deep mea culpa mode and started negotiating with the bill’s sponsors on July 18. The result was an official statement of a new policy by the USOC, with no formal Congressional action at all. Senator Bob Menendez announced, “I’m incredibly pleased that the USOC has formally adopted the requirements outlined in the Team USA Made in America Act.” USOC CEO Scott Blackmun stated, one imagines through heavily gritted teeth, “We were pleased to work with Sen. Menendez and his colleagues in Congress to address their concerns regarding Team USA’s parade uniforms.” Yeah. Real pleased, I’m sure.

In a welcome sign that our lawmakers are not completely bonkers, the new policy does not require the current uniforms to be burned or even replaced. Here it is:

The general idea behind the WTO is not to eliminate trade barriers but to bring them under control. This happens through a process in which members negotiate those trade barriers among themselves. The trade barriers you are allowed to have are the ones that were agreed to in negotiations. You can’t come along later and unilaterally erect new ones. If you think other members are cheating, there’s a process for dealing with that. “Trade barriers” includes not just tariffs, but also domestic sourcing requirements, since such requirements (in the vision of trade embodied in the WTO agreements) distort what would otherwise be the “normal” flow of exports and imports under agreed-upon barriers.

The WTO does not, and cannot, prohibit private parties from deciding on their own to buy domestic products even if it doesn’t make economic sense to do so. But it generally prohibits governments from ordering or even encouraging them to do so. (Canada was found in violation of this principle back in the pre-WTO era for having a requirement that foreign investors source domestically when the domestic price was the same or cheaper – i.e., a very modest burden.)

What about government purchases? Can the government decide on its own that it prefers domestic sources, even when they’re more expensive? Yes – this is an exception to the general rule against requiring or encouraging domestic sourcing, partly because the government is in a sense just making its own “private” decision. But governments can also commit on a reciprocal basis to opening up their procurement markets by signing on to the Government Procurement Agreement. The US is a member; China is not.

As a result, if the USOC is a governmental entity, then it can decide on its own or be ordered by government to prefer domestic sources without China being able to complain. (Other GPA members might able to complain, though.)

But is it? It’s a federally chartered corporation under the Ted Stevens Olympic and Amateur Sports Act. But that doesn’t make it a federal governmental agency any more than a Delaware corporation is a creature of the Delaware state government. It receives no federal money. As I read the USOC’s bylaws, the board of directors is entirely self-perpetuating, and no US government official, elected or not, has any say in their selection. I stress that I’m not an expert in what counts as a governmental entity for purposes of the GPA, but my guess is that the USOC would not.

If that’s so, then it has to be able to decide on its own whether to source domestically or not. If the USOC board members, on the basis of a misguided sense of patriotism, bribes from textile manufacturers, pressure from their mothers, or instructions from the Great Pumpkin appearing to them in a dream, decide to source domestically even when it would be cheaper to go abroad, that’s OK under WTO rules. (This is why the policy’s stated exception for non-compliance with applicable trade agreements or treaties to which the US is a party makes no sense – the USOC, as a private party, cannot violate those agreements; only the US government can.) What is not OK, I think, is for board members to make this decision under government pressure.

If it would not be permitted for the US government to mandate the USOC to source uniforms domestically (that would be, if nothing else, nullification or impairment under Art. XXIII of the GATT), surely it is not permitted for it to engage in backroom armtwisting to achieve the same result. Of course, it’s harder to bring a WTO case when backroom armtwisting is involved, because when armtwisting takes place in the back room, it’s hard to get evidence. In this case, however, the armtwisting took place in the living room, with a big picture window facing the street and paparazzi outside recording every second.

I remember the outcry over China’s indigenous innovation policy, which after all involved government procurement and was therefore not even WTO-illegal. And I remember the, ahem, skepticism that greeted China’s claim that when its exporters stopped shipping rare earths to Japan just at the time that China was pissed off at Japan, the government had nothing to do with it. I don’t think it is really in the interest of the US to promote the principle in international trade that reneging on your promises is OK provided you do it through private meetings and off-the-record phone calls and not through formal legislation.

There’s a brief discussion of some of these issues at the International Economic Law and Policy blog.

Listed below are links to weblogs that reference Olympic uniforms, Congressional fashion statements, and the WTO:

I think the US politicians are being ridiculous. Could China have insisted that all equipment, measurement meters and gadgets used in the last Olympic Games held in Beijing be made in China and none made in USA?