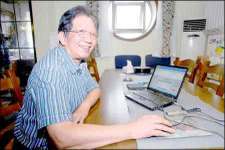 Here's an interesting story about Wuhan University Faculty of Law professor Zhao Tingguang (赵廷光), who after sixteen years of research and (it is reported) 1.3 million yuan out of his own pocket has developed software that will determine the appropriate sentence in criminal cases. The reporter takes the software for a test run: On Nov. 13, 2003, the husband-and-wife proprietors of an internet cafe were attacked with knives by Zhou Wei, Zhou Yan, and others. The husband's right hand was cut off at the wrist, and the wife suffered serious injuries as well. Their injuries were classified as Grade 4 and Grade 7 respectively.

Upon starting up the software, one first selects the name of the crime and the act. The second step is to click on various circumstances of the case relevant to sentence measurement. The third step is to grade, on a 5-point scale, the importance of each element as well as its "concrete manifestation" (具体表现情况). The fourth step is to enter in a few words the basis and rationale for the grading. The computer then generates a proposed sentence as well as an explanation in several thousand characters of the grounds for the proposed sentence (presumably citing not just statutes, but also judicial interpretations and other authoritative documents). When going through the above steps, one can look up relevant statutes, judicial interpretations, materials on sentencing theory, and cases.

The software recommended a sentence of seven years and one month for Zhou Wei and one year and six months for Zhou Yan.

Incidentally, the report states that a previous version of the software (keyed to the 1979 Criminal Law) was in use by over 100 courts, procuracies, and law firms.

Listed below are links to weblogs that reference Sentencing by software: