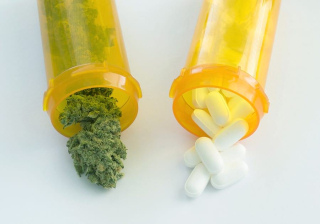 Since 2000, over 500,000 Americans have died from opioid overdoses--equating to more American lives lost from this epidemic than World War II.

According to the CDC, opioids are currently the most common cause of accidental death in the United States. With this drug taking so many American lives every day, measures need to be taken to lessen opioid use. Experts have proposed that medical marijuana may be a solution to help Americans struggling with opioid addiction.

In a recent student conducted by the journal JAMA Internal Medicine, researchers found that states with legalized medical marijuana (MMJ) report 2.21 million fewer daily doses of opioids prescribed per year under Medicare Part D, compared with those states without MMJ. Opioid prescriptions under Medicaid also dropped by 5.88% in states with medical cannabis laws compared with states without such laws, according to the studies.

David Bradford, professor of public administration and policy at the University of Georgia and a lead author of the JAMA study, notes the study's significant findings.

Further, the recent JAMA study is not the first set of research indicating a link between marijuana legalization and decreased opioid use. Another JAMA conducted study from 2014 revealed that states with MMJ had 24.8% fewer opioid overdose deaths between 1999 and 2010. And perhaps even more convincing evidence was set forth in a 2017 study published by the American Public Health Association, which found that the legalization of recreational marijuana in Colorado in 2012 reversed the state's upward trend in opioid-related deaths.

Even with the evidence provide by numerous studies and epidemiologic research, medical marijuana still has its skeptics, such as Attorney General Jeff Sessions, who recently commented, "we think a lot of this [opioid use] is starting with marijuana and other drugs."

If marijuana were actually a dangerous gateway drug, as Sessions suggested, it would be at least somewhat evident across the data gathered. We would find that states with MMJ laws have an increase of opiate drug use and overdose deaths, when in fact just the opposite has been evidenced.

Despite the relatively minimal side-effects associated with marijuana use, such as cognitive impairment, these risks are nearly obsolete when compared to the often-deadly impact resulting from opioid abuse.

Again according to Bradford, unlike opioids, marijuana has little addiction potential.

"No one has ever died of cannabis, so it has many safety advantages over opiates," Bradford said. "And to the extent that we're trying to manage the opiate crisis, cannabis is a potential tool."

If we as a nation want to successfully remedy the current opioid crisis, this type of comparative research needs to continue--and federal regulations needs to adapt accordingly. Senselessly ignoring medical marijuana as an alternative pain treatment to opioids will continue to be a detriment to the public health and welfare of America's citizens.
--Gabrielle Rennie

When looking at the research and statistics that demonstrate marijuana's beneficial properties, it seems as though legalization (at least for medical purposes) would be gaining more support. The opioid crisis is incredibly prevalent and widespread; a benefit/burden analysis would show that marijuana could be a way to solve this crisis, at least from a medical marijuana standpoint.