Budding Industries: How Cryptocurrency Might Solve The Cash-Only Cannabis Problem 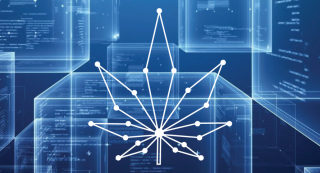 Where traditional efforts to comply with financial and logistical regulations have failed, blockchain industrialists believe that cryptocurrency could solve the "cash-only" cannabis problem by reducing the amount of capital moving through the system in the form of cash and increasing the efficiency, security, and predictability of payments.

Although some form of cannabis is legal in thirty of the fifty states, it remains classified as a Schedule I narcotic under the Controlled Substances Act (CSA) and is illegal on a federal level; therefore, it is impossible for cannabis businesses to get bank accounts from federally chartered banks. As a result, policy, as it currently stands, forces cannabis companies to operate on an all-cash basis. Despite $10 billion worth of sales transactions occurring within the cannabis industry last year, anyone involved in the business operation is susceptible to federal prosecution and left with limited financial service options.

For context, in mid-June, the Senate Appropriations Committee moved to block an amendment that would have allowed cannabis businesses to store their profits in financial institutions. Forbes reporter, Tom Angell provided insight of the Senate bill:

In a 21 - 10 vote, the Senate Appropriations Committee tabled an amendment on Thursday that would have shielded financial institutions that open accounts for cannabis businesses that are complying with state laws from being punished by federal regulatory authorities.

A powerful congressional committee voted on Wednesday to reject a measure to protect banks that open accounts for marijuana businesses from being punished by federal financial regulators. Supporters then scrambled to craft a more limited measure focused on medical cannabis businesses, but it was ultimately withdrawn before a vote could take place.

The broader measure would have prevented the U.S. Department of Treasury from taking any action to "penalize a financial institution solely because the institution provides financial services to an entity that is a manufacturer, producer, or a person that participates in any business or organized activity that involves handling marijuana or marijuana products" in accordance with state or local law.

The restrictive regulatory system leaves cannabis businesses open to organized crime like money laundering, theft, and cheating on payroll and taxes; however, there is speculation that cryptocurrency can ease these pains. Nick Meyers of The Phoenix New Times describes the premise of cryptocurrency in his article, Weed Money: Cryptocurrency May Be Key to Unlocking Bank Vaults for Cannabis Industry:

The basic idea of cryptocurrency is that it’s decentralized money, acting as both a currency and a transaction system.

Unlike official currencies such as the dollar, euro, or yen, no government authority tracks how much cryptocurrency is in circulation or who’s using it. Instead, these all-digital currencies use a process called blockchain.

The easiest way to think of a blockchain is as an electronic ledger that gets updated with each transaction.

Every time someone makes a cryptocurrency transaction, that data, along with all previous transactions in the chain, gets stored in a new block.

The kicker is that blockchains are secure by design. Because transaction information gets stored in every new block, it’s difficult to tamper with or alter that data without compromising its authenticity.

In addition to solving the "cash-only" problem, the emerging blockchain industry can provide support regarding helping cannabis companies "meet regulatory requirements by offering immutable records showing the source of each plant in a harvest, where it is processed, how it is shipped and where it is distributed," as reported by John McMahon of News BTC.

Moe Asnani, owner of Downtown Dispensary and D2 in Tucson, also stated that "anti-money-laundering laws are some of the biggest hurdles to legitimate cannabusiness banking, and having the verifiable ledger stored in high-security blockchains would demonstrate the market's legitimacy."

Asnani and McMahon's sentiment is shared amongst other cannabis and blockchain experts who say that blockchain platforms create transparency in the cannabis supply chain, and various cryptocurrencies, like HempCoin and ParagonCoin, are taking proactive approaches to solve the cash dilemma.

Both cannabis and cryptocurrency are budding industries, and their similar challenges create the opportunity for joint growth; as cryptocurrency provides transparency to the cannabis business and marijuana operators can supply a stable customer base for the use of cryptocurrencies, perhaps this partnership will be the future of finance in the cannabis industry.

(For those unfamiliar with blockchain, Forbes and BlockGeeks are accessible resources.)