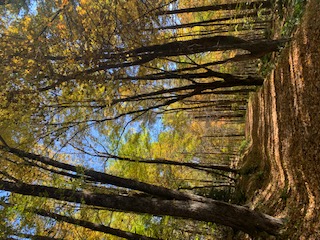 More and more of my posts are focusing on running.

I promise to tie the post to teaching at the end, but I will put the text under the break to spare the uninterested.

Last weekend, endurance athlete John Kelly and his Olympic Trials qualifying friend Cory Keehn agreed to let me tag along on a training run of theirs in Blowing Rock, NC. While I knew John and Cory were definitely out of my league as runners, I figured I could keep up with their “easy to moderate” effort for at least a decent part of their 18-mile run. I was wrong. After half a mile of jumping root to rock, I was panting. After one mile and 300+ feet of elevation gain, I quit and turned back for some flatter solo jogging on the easier trails pictured above. I hate quitting and appreciate a good challenge, but I quickly realized this run was likely to be well outside of my ability level and would probably turn out to be simply destructive.

The world’s best marathoner, Eliud Kipchoge, is known for saying “no human is limited.” Taken literally, this is clearly incorrect. We all have limits. Pushing too hard, too early, can be harmful. Philosopher David McPherson reminds us that there are virtues associated with recognizing and honoring limits. Yet, I understand what Kipchoge is pointing toward and what he means in context. Kipchoge seems to be pushing us to challenge our perceived limits.

As philosopher William James wrote in The Energies of Men:

“…if an unusual necessity forces us to press onward, a surprising thing occurs. The fatigue gets worse up to a certain critical point, when gradually or suddenly it passes away, and we are fresher than before. We have evidently tapped a level of new energy, masked until then by the fatigue-obstacle usually obeyed. There may be layer after layer of this experience. A third and a fourth “wind” may supervene. Mental activity shows the phenomenon as well as physical, and in exceptional cases we may find, beyond the very extremity of fatigue-distress, amounts of ease and power that we never dreamed ourselves to own, — sources of strength habitually not taxed at all, because habitually we never push through the obstruction, never pass those early critical points."

This is what Kipchoge seems to want to teach us. Push through the “fatigue-obstacle,” he encourages us. Find those “sources of strength habitually not taxed at all.” And maybe you will find that your perceived limits were not actually real limits. As Shalane Flanagan said, Kipchoge's limit-shattering 1:59 marathon was a gift to the world. (I woke up in the middle of the night to watch him break this barrier three years ago and was surprisingly emotional when he did).

This is all inspiring, but the lesson is not that you or I should go try to run a 1:59 marathon tomorrow, or ever, but rather than we should question our own perceived limits and work toward breaking through them.

John Kelly spells this out thoughtfully here around the 21-minute mark:

“We should be seeking to be the best that we can be…to give our best…and to see how much we can improve. And I’ve discovered through running that really what each of us thinks  is our best probably isn’t….we are capable of so much more than we think we are initially….these things I am doing now I would have never, never imagined them.  I would have thought anyone who would have suggested them was absolutely crazy…we have to continually improve.”

In other videos, John explains that the Barkleys Marathons (100+ miles with 50,000+ feet of climbing) was clearly not his first endurance goal. The best challenges, he argues, are things right on the edge of possibility for you. For him, that was first completing a marathon, and then qualifying for the Boston Marathon, and then on to more extreme endurance challenges. Limit breaking is usually incremental.

My limits, perceived and real, are clearly in a very different place from John’s. But he was kind and encouraging after my early departure. A few days later, this past Wednesday, I had a running workout that was more appropriately set on the edge of my own perceived limits. The workout would not have been impressive for many, but completing it was uncertain and resulted in a small break through. It required pushing through a fair bit of pain and gives hope of a new personal record on November 12.

If you have made it reading this far, bless you. You may be a running nerd or a glutton for punishment. But I did promise to tie this to teaching. In my teaching reflection for my full professor promotion application this year, I wrote:

“During the COVID-19 pandemic, I have become less strict on deadlines and have spent more time working with students to learn the materials through ungraded exercises. I made these adjustments from listening to students and hearing about their mental health struggles. While challenging work is still important, the work should not be so difficult that it is destructive.”

The tension between too easy (boring) and too difficult (damaging) is constant in teaching. It is especially difficult when you have students at very different levels of preparedness in the same classroom. Mastery grading, though very time consuming for the professor, is one possible solution, but there are probably many other paths to explore as well. As professors, we have to continually evaluate when challenge will help students and when it will harm them. While the pandemic definitely changed the calculation, I don't think it removed the continued need for appropriate levels of academic challenge. As philosopher and professional distance runner Sabrina Little writes, "[m]any of the richest and most humanizing experiences in life involve a fair amount of discomfort."