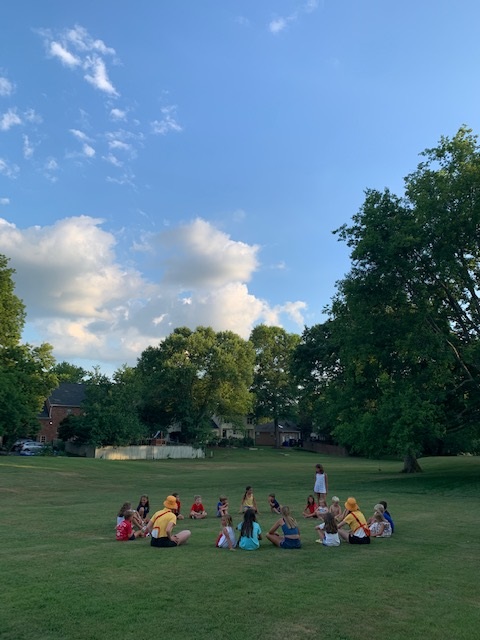 (Some neighborhood children playing duck-duck-goose in our common space on July 4th.)

Recently, I finished philosopher David McPherson’s book The Virtues of Limits published by Oxford University Press this year. While I disagree with McPherson in certain areas, I highly recommend his book. I was reacting to the book with friends and the author before I even completed it. Perhaps it would have been best to refrain from commenting until I had finished, but it was a sign that the book was quite thought-provoking. The book was well-written and accessible, even to a non-philosopher like me.

Given that this post only has a loose connection to business law, I will place the remainder of my thoughts below the page break.

In this blog format, I will not attempt a full review of McPherson’s book, but I do want to examine his take on neighborliness. In the section entitled “Duties of Assistance: Neighborliness and Loyalty as Limiting Virtues” McPherson challenges the utilitarian ideal of impartiality and champions “the moral significance of proximity.” Neighborliness, as McPherson defines it, is “suggestive of someone who is helpful and considerate to those who live nearby.” He explains further that neighborliness is “the virtue of being properly responsive to the dignity of other human beings in face-to-face (or close) encounters.”

McPherson takes issue with Peter Singer’s famous Child in the Pond thought experiment. Singer asks you to imagine passing by a shallow pond where you see a young child drowning. You know you can safely save the child, but you will ruin some nice clothes worth a few hundred dollars to do so. Most people say they would be morally obligated to save the child. Singer then suggests that we face this issue every day as there are many children in the world who could be saved for a similar cost.

According to McPherson, however, there are significant differences between local assistance where “we can see clearly that we are helping” and helping distant people where aid may be “paternalistic and insufficiently attentive to local input.” McPherson also criticizes the utilitarian ideal as being overly demanding to the point of being “self-mutilating and self-alienating because it requires us to sacrifice the personal projects and relationships that are integral to living a worthwhile human life.” McPherson admits that there may be some responsibility to respond to world poverty but it should stem from “our particular relationships” and that our friends and family deserve our primary loyalty.

McPherson’s arguments above are attractive to me in a number of ways but also give me pause. Three years ago this week my family and I moved from within the city-limits of Nashville to an idyllic neighborhood about 10 miles outside the city. This neighborhood of approximately 400 homes is a tight-knit community. In six years of living in our “city home,” we met about four families in houses close enough to reach by foot. In six days in our new home, over a dozen neighbors introduced themselves, brought us meals, or invited us into their own dining rooms. The list of community care in our neighborhood is too long for this space, but I will just mention two things that happened this past week. A large tree fell in a neighbor’s yard last Sunday. Another neighbor and his two sons chopped up the tree before the homeowner returned from church and two other neighbors helped clear the yard without being asked. Seemingly small, but important, things like this happen constantly. On a bigger scale, this past weekend a few neighbors organized a fundraiser for a local family that includes a daughter with special needs. The goal was to raise about $3500 for an adaptive bike. The intent was not just to raise the money but also to show the daughter and her family that they were loved. As such, the neighborhood children created a market to sell handmade art, homemade baked goods, and pizza donated from two local spots. The market raised over $6000, but even more importantly was a tangible expression of neighborly love and support.

I could fill up many more pages with the ways our neighbors have supported one another, and it is, as McPherson suggests, beautiful to “form identity-constituting bonds of attachment” with people we see face-to-face on a regular basis. In our frequently fragmented, individualistic society, I do lament the way many people ignore the importance of proximity. My family values physical proximity so highly that we have arranged our lives so that my wife’s work, our children’s school, and our church are all less than three miles from our home. McPherson is right that neighborliness “calls us to solidarity with concrete humanity, rather than abstract humanity” and that “particular human beings [known deeply] can be difficult to love, given their various imperfections.”

Yet, given the reality that many of our neighborhoods in the United States are largely segregated by wealth and race, an ethics that focuses myopically on the neighborhood seems to be too narrow. Perhaps neighborliness should be the first step, “charity begins at home” as the saying goes. The Thomas Fuller quote continues, however, to say that “but [charity] should not end there [at home].” At its worst, neighborliness can be used as an excuse to ignore large problems that exist beyond limited geographic boundaries and in communities unlike your own.

McPherson is likely right that the utilitarian ideal is unrealistic. As he notes, even Peter Singer does not answer his own call for impartiality because Singer does not give until he is as destitute as the most impoverished people.* But ideals serve purposes outside of practicality. Ideals can guide, illuminate, and challenge. Further, McPherson, who teaches at a Jesuit university and quotes a good bit of Christian teaching in the book, does not address Jesus’ instruction to the “rich young ruler” to sell all of his possessions and give to the poor. (Matthew 19:21) Jesus’ call, like Singer’s, exposes us as limited human beings, but that does not mean that we should just give up and settle for a less ambitious goal. (Update: McPherson does address the rich young ruler story later in the book, but not in the neighborliness section).

This post is already too long, but given the subject of this blog, I want to tie it to business. First, multinational businesses have made face-to-face sustained neighborliness difficult in myriad ways. Business birthed products from cars to the iPhone have drawn us out of embodied  face-to-face relationships. However, these products have also allowed us to maintain relationships longer term, as family members and friends move far away. These products have also provided a way to more easily expand beyond our sometimes insular communities and into more welcoming or more challenging groups. Businesses can also disrupt neighborliness through demanding frequent work travel, all-consuming hours, and geographic transfers. Businesses also have a history of breaking up neighborhoods with development, even forcing people out of cherished homes with assistance from the government using eminent domain. But businesses can also help people form communities with coworkers and can create tools that help neighborhoods flourish. From a business ethics perspective, businesses probably do have first loyalty to their immediate "neighbors" – their shareholders, employees, and customers. But, as with the Thomas Fuller quote, businesses' cares should not stop there, and should aspire to also consider appropriate ways to be helpful beyond assisting its most direct stakeholders. Yes, both individuals and businesses should be neighborly, but the best ethical ideals should prompt movement beyond immediate circles as well.

*It is worth noting that Singer is giving away his $1 million dollar Berggruen Prize and has increased his giving from 10% of his income in the 1970s to approximately 40% in the 2020s.

**I purposefully have not discussed McPherson’s somewhat related writing on “sufficitarian justice,” which he places in his Political Limits chapter. The focus in this post was on the individual and private business; addressing political limits and justice would take additional lengthy posts.

Interesting post, Haskell. I appreciate the observations and limited review. I hope you will write additional posts about other aspects of the book.

I do believe in neighborliness. And I believe in broad conceptions of it. Monetary donations are one aspect. But direct action and advocacy also have their places in being neighborly. The concept of neighborliness is complex, involving some form of empathy or understanding of community and choice as to how we spend our limited resources. This post made me think. Many thanks.

Thanks Joan. I do think the definition of “neighbor” is important. And I am interested in how the Internet may expand the definition. McPherson does seem to focus on face-to-face interactions, but not sure how far he intends the bounds to be (neighborhood, city, state, etc.)

First, let me preface these comments by stating that I am thrilled that you and your family have found such a great residential location to flourish.

Second, at least during my lifetime, business is predominantly an outgrowth of people connecting with people – not mere communications. I’ll never forget my daughter having friends over to her house and then they all sat adjacent to one another and texted to each other!

Third, I am an advocate of “The Golden Rule” and believe that neighborliness is an outgrowth of the Golden Rule principle.

Fourth, I can relate to your experience in your “city home” as it is reflective of that I experienced while my wife and I lived in a condominium. We knew the residents in the units next to our own and that was “about it” despite having lived there for five years. It was “just someplace to sleep” - - not living in a community.

Fifth, I believe your exploration is at its core a discussion of the method by which many ills are compounded because of detachment. Neighborliness is a method of solution.

Thanks for the taking the time to compose your thoughts.

Thanks again Haskell for these interesting and thoughtful reflections on my account of the virtue of neighborliness, which raise a number of important issues. For those interested, I offered some replies on Twitter: https://twitter.com/davidlmcpherson/status/1544782156349599744?s=20&t=A38uZvSWrIt9z6goltUEFw I've also appreciated reading the comments here. Blessings to all, David