We hold that: (1) the SEC's in-house adjudication of Petitioners' case violated their Seventh Amendment right to a jury trial; (2) Congress unconstitutionally delegated legislative power to the SEC by failing to provide an intelligible principle by which the SEC would exercise the delegated power, in violation of Article I's vesting of “all” legislative power in Congress; and (3) statutory removal restrictions on SEC ALJs violate the Take Care Clause of Article II.

The case involved two hedge funds founded by Jaresky, an investor, businessman, and conservative radio host.  The SEC alleged that Jaresky: (i) misrepresented the identity of the prime broker and auditor; (ii) misrepresented the funds' investment parameters and safeguards; and (iii) overvalued the funds' assets to increase the fees collected.  After an evidentiary hearing, an SEC ALJ found that the funds had committed securities fraud.  Jaresky's defended by raising constitutional challenges to administrative adjudication, among other things.
Although his arguments were rejected by the Commission, the Fifth Circuit embraced them.  I'll overview them briefly in turn before turning to broader context and the long term perspective.
7th Amendment Right to a Jury Trial
The Fifth Circuit concluded administrative adjudication was unconstitutional "because the SEC's enforcement action is akin to traditional actions at law to which the jury-trial right attaches. And Congress, or an agency acting pursuant to congressional authorization, cannot assign the adjudication of such claims to an agency because such claims do not concern public rights alone."  As I read the opinion, the Fifth Circuit's  seems to find that a right to a jury trial attaches to statutory and administrative claims which significantly overlap with common law claims. This may not be the only reading and I welcome any thoughts in the comments about the scope of this reasoning.
There are some immediate implications from this.  If applied more broadly, this reasoning might gut much administrative adjudication outside the SEC as well. This holding does not turn on anything unique to the SEC.  This would also likely significantly shift enforcement actions to federal court.
Unconstitutional Delegation
The SEC has long enjoyed the discretion to decide whether to proceed administratively or in an Article III court. The Fifth Circuit concluded that Congress unconstitutionally delegated this discretion because Congress did not specify a specific intelligible principle for this decision.
The SEC had argued that the decision about where to bring its enforcement action was an executive one akin to prosecutorial discretion--not a legislative decision.  The Fifth Circuit disagreed finding that the decision about whether to consign matters to administrative adjudication or Article III courts was a legislative one.  It reasoned that different procedures apply in administrative adjudication and the ability to elect between administrative adjudication and Article III courts allows the SEC to pick the rules under which it would play on a case-by-case basis.
The opinion marks another advance for nondelegation doctrine within the federal courts.  As the doctrine expands, the risk to administrative agencies grows significantly.
Unconstitutional Removal Restrictions
As a final holding, the Fifth Circuit invalidated the ALJ structure as improperly insulated from presidential control because ALJs enjoy two layers of for-cause removal protections.   It found that:

SEC ALJs perform substantial executive functions. The President therefore must have sufficient control over the performance of their functions, and, by implication, he must be able to choose who holds the positions. Two layers of for-cause protection impede that control; Supreme Court precedent forbids such impediment. 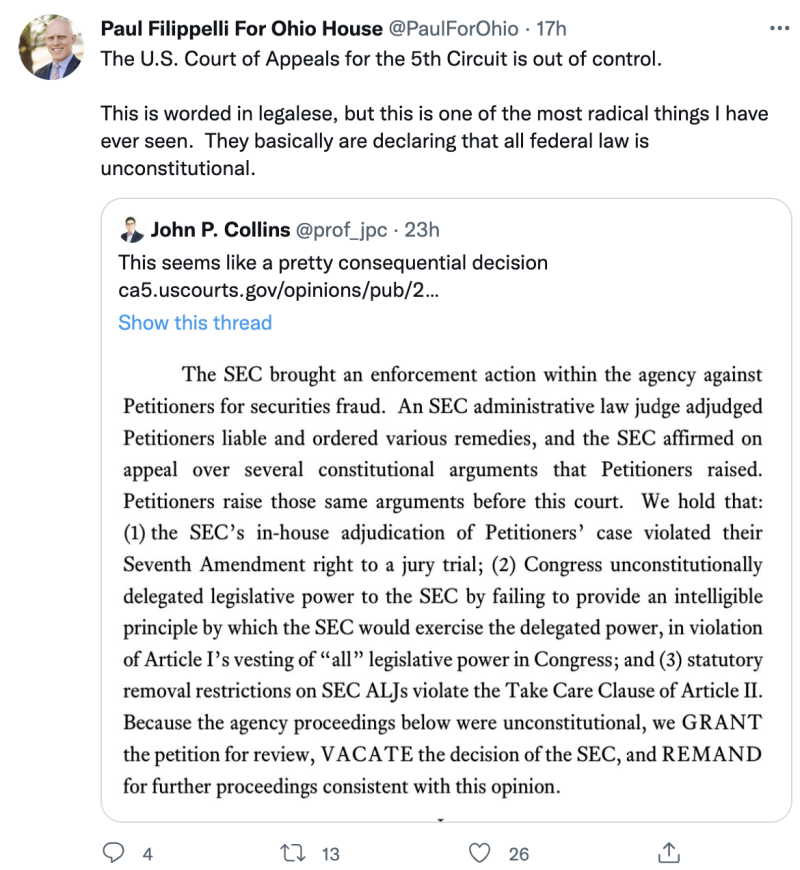 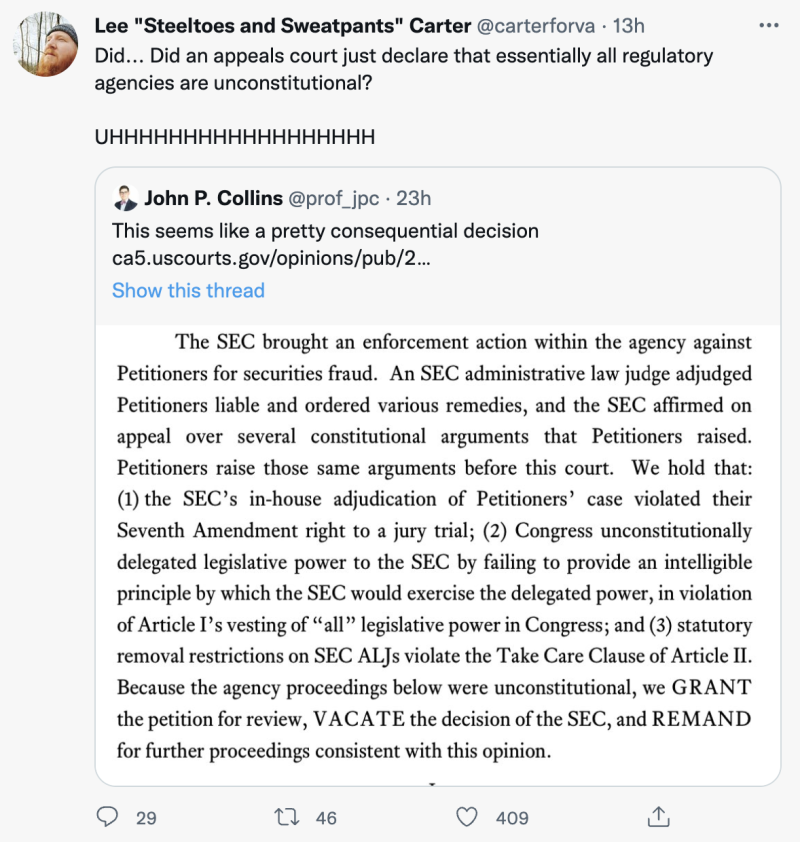 As Bloomberg's Matt Levine has explained, this particular holding only addressed a small part of what the SEC does.  He explained that we should pay attention, but that it's not as though the SEC is suddenly shutting its doors:

This may not be a particularly big deal. Two judges on one panel of one appeals court found that one small part of what the SEC does is an unconstitutional delegation of power. It is possible that this decision is fairly narrow: Congress did delegate this decision — about whether to bring cases in federal courts or its own forums — to the SEC, fairly recently, without any guidance at all, which is unusual. Perhaps the “intelligible principle” standard allows the SEC to do all of its other rulemaking (because Congress has mostly given it some broad guidance about protecting investors in the public interest, and because SEC rules do help to fill in a fairly detailed statutory system), but not to make this particular decision. Still. I think the Fifth Circuit went out of its way to find a nondelegation problem because the Supreme Court has changed and now there will be a lot more courts finding a lot more nondelegation problems. I think this might be a sign of where things are going.

Others have had similar takes.  Professor Wurman thought the Fifth Circuit didn't need to reach many issues, but did not see a need to panic.

Maybe I’m missing something—and I don’t mean to downplay the importance of the Fifth Circuit’s decision—but it seems to me lots of folks are overreacting. The court did NOT dismantle SEC’s enforcement powers, and the SEC is NOT all of a sudden unconstitutional after 90 years. 1/ https://t.co/TKBKOtf4uy

We needed good news in crypto, this is good news. If SEC loses its in house judge advantage, it’s a lot harder to bring cases stretching the Howey test beyond its intended contours to try and shut down legit, compliant projects. https://t.co/zNeqhCB86L

You are welcome. Every American should have a right to a jury trial. No government agency, including the SEC, should have the ability to be judge and jury. This is a 9 year journey that will protect investors from continuous SEC over-reach https://t.co/cP0m2h5esB

Professor Jackson disagreed with the Fifth Circuit's reasoning with a thread.

I have thoughts on this terrible 5th Cir. opinion kneecapping the SEC. (1/n): https://t.co/KoMCVbAkxz

A Worrying Trendline
I've written about the risks that the lines of judicial thought here pose.  Although this decision creates new risks for administrative agencies, financial regulators should pay particularly close attention.  That the Fifth Circuit would declare SEC ALJs unconstitutional wasn't on my immediate radar, but it didn't surprise me.  The bigger risk I'm worried about is that a court will suddenly take out some systemically important financial regulator leading to a market collapse and a financial crisis.  One way to think about this risk is that the courts have begun to play a game of Jenga™.   The Fifth Circuit just pulled away a bit of the SEC's enforcement discretion and use of ALJs within the Fifth Circuit.  Nothing has come tumbling down yet.  What happens when some brief before it raises constitutional challenges to FINRA, the Exchanges, or other SROs?  It's all fun and games until you pull the wrong block and crash the bond markets.

Super post, Ben. Thanks for including all the social media posts and references, too. Your "worrying trendline" is also of concern to me. Tensions involving the non-delegation doctrine have been rising. Definitely something to watch . . . .