We got you ATRS as a client after considerable favors, political activity, money spent and time dedicated in Arkansas, and Labaton would use ATRS to seek lead counsel appointments in institutional investor fraud and misrepresentation cases.  Where Labaton is successful in getting appointed lead counsel and obtains a settlement or judgment award, we split Labaton’s attorney fee award 80/20, period.

The State Street payment was not the first:  Labaton had paid a percentage of its total fee awards in at least seven other cases.  While scholars had discussed the role of “pay to play” in securities class actions for years, State Street revealed a referral agreement and raised questions about the extent of favors and political influence brought to bear.

Shortly after we published Uncovering Hidden Conflicts, Judge Wolf issued a blistering opinion in State Street, finding that “the submissions of Labaton and [the Thornton Law Firm] in support of the request for an award of $75,000,000 were replete with material false and misleading statements” and that the firms “in many respects violated Federal Rule of Civil Procedure 11(b) and related Massachusetts Rules of Professional Conduct.”  The opinion also described, in explicit detail, the origin of the relationship between Labaton, Chargois, and ATRS.  Ultimately, Judge Wolf cut the fee from approximately $75 million to $60 million (the lower end of the “presumptive reasonable range”) and referred his opinion to the Massachusetts Board of Bar Overseers.  An appeal is pending.

The State Street case prompted an exposé in the New York Law Journal, including extensive comments from Chargois’ former (now retired) law partner, Tim Herron, and a deep-dive into the history of the ATRS/Labaton relationship.  Some Arkansas lawmakers questioned ATRS’ decision to rehire Labaton during a public hearing in May.  As Professor Coffee put it, “The practices [the special master] uncovered is like turning over a rock in the field and finding some ugly things crawling around.”

More, after the jump.

To date, however, the case has not prompted reforms aimed at uncovering similar relationships between class action litigants and their counsel, either in federal courts or the Delaware Court of Chancery.  Reforms aimed at identifying conflicts may be necessary because neither class or defense counsel have any strong incentive to call a court’s attention to facts which could delay a negotiated settlement.

Courts considering how much scrutiny to apply to a settlement might want to know about past issues with class plaintiff. For example, ATRS, along with five other institutional stockholders, now seeks the Court of Chancery’s approval of a $60 million partial settlement, and a $15 million fee award, in In re Tesla Motors, Inc. Stockholder Litigation (“Tesla”).  The settlement will be heard next week.  So far as we know, no litigant ever brought State Street to the court’s attention in connection with the settlement.  Meanwhile, the Court of Chancery’s current processes for settlement approval are no more likely to uncover State Street-style relationships than the federal courts did—until Judge Wolf appointed a special master.

In September 2016, ATRS, represented by Labaton and Prickett, Jones & Elliot, P.A, joined two other plaintiffs in a lawsuit challenging the Tesla’s acquisition of SolarCity Corporation in the Delaware Court of Chancery.  Allegations of conflicts inherent in Elon Musk’s position as major stockholder in both companies made the transaction an obvious target for stockholder litigation. Multiple plaintiffs and several major plaintiffs’ firms filed suit.  Ultimately, the Court of Chancery appointed seven institutional plaintiffs, including ATRS, to leadership roles.  (The Boston Retirement System would later withdraw as lead plaintiff.)  Grant & Eisenhofer, P.A. (“Grant & Eisenhofer”), Kessler Topaz Meltzer & Check, LLP, and Robbins Geller Rudman & Dowd LLP (“Robbins Geller”) were selected as lead counsel, but Labaton was not.  (Labaton would formally withdraw from Tesla in October 2018, without mentioning State Street or ATRS’ role in that case.)

The Tesla case survived a motion to dismiss in March 2018, and a subsequent cross-motions for summary judgment in February of this year.   Fast forward to June 2020:  plaintiffs and the Tesla director defendants (other than Musk) announced a $60 million partial settlement (the “Tesla settlement”), while Musk chose to head to trial.  Although class members will give up their class claims against the director defendants in the Tesla settlement, the settlement consideration will go to Tesla as a derivative payment.  Plaintiffs’ counsel seek $15 million in fees and approximately $1.8 million in expenses for their work.

The August 17, 2020 settlement hearing appears likely to proceed without any real adversarial process.  Plaintiffs and defendants stipulated to class certification in April 2019 without any contested briefing and without notice to other stockholders.  The objection deadline, August 3, 2020, passed uneventfully.  Of course, any stockholder wishing to challenge the settlement had only five business days to respond to the Tesla plaintiffs’ brief in support of the settlement.  In theory, the Court of Chancery’s scheduling order gave objectors ten business days to file objections; but plaintiffs unilaterally halved this response period by filing their papers under seal and, consistent with the Court of Chancery Rules, submitting a public version five days later.  Unfortunately, this is common practice in Delaware.  Indeed, Defendants filed a Response—presumably in support of the settlement—that was not unsealed until August 10, 2020, a week before the settlement hearing.

Thus, without adversarial objectors or a special master’s scrutiny, the Tesla settlement will likely be heard on a sparse, one-sided record.  Although the Court of Chancery’s procedures contain disclosure provisions designed to identify certain potential conflicts between plaintiffs and absent stockholders, a comparison with ATRS’ experience in State Street shows that they are unlikely to identify the problems that may arise when repeat-player institutional litigants lead extremely profitable representative actions in conjunction with their contingency counsel.

Court of Chancery Rule 23.1  requires plaintiffs seeking to settle a derivative action to submit affidavits stating under penalty of perjury that they have “not received, been promised or offered and will not accept any form of compensation, directly or indirectly, for prosecuting or serving as a representative party in the derivative action,” unless ordered by the Court or as compensation for out-of-pocket expenses.  The Tesla plaintiffs offered nearly identical declarations tracking the language of Rule 23.1.  But how much weight do these unchallenged, carbon-copy declarations deserve?

Not much, if Inter-Local Pension Fund GCC/IBT v. Calgon Carbon Corp. (“Calgon Carbon”), a recent books-and-records action involving one of the Tesla plaintiffs’ firms, provides any indication.  In 2018, then-Master Zurn penalized another Robbins Geller pension fund client after the fund’s representative submitted a fact affidavit that “was entirely lawyer-drafted,” holding that the deponent “did not have the knowledge that the [a]ffidavit stated that he did.”  The penalty, however, was not much more than a slap on the wrist:  despite the affiant signing “under penalty of perjury,” the court shifted less than $200,000 worth of defendants’ fees to plaintiff and forbid the plaintiff from relying upon the affidavit and testimony from a deposition. The pension fund still prevailed in its lawsuit, a victory recently upheld by the Delaware Supreme Court.  Thus, after Calgon Carbon, even affidavits that “threaten[] the legitimacy” of a court proceeding may not result in disqualification.

In any event, Rule 23.1 may ask the wrong question,:  it focuses on whether plaintiffs receive compensation for serving “in the derivative action.”  State Street shows why this is insufficient:  the “favors, political activity, money spent and time dedicated in Arkansas” that allegedly earned Chargois’ his referral fees were expended to “[get Labaton] ATRS as a client,” not for ATRS’ service in a particular case.  The Court of Chancery’s rules have not been updated to reflect the more complicated ecosystem of relationships that often exist between institutional plaintiffs, their counsel, and other entities, aptly illustrated by the Calgon Carbon plaintiff in a trial exhibit: 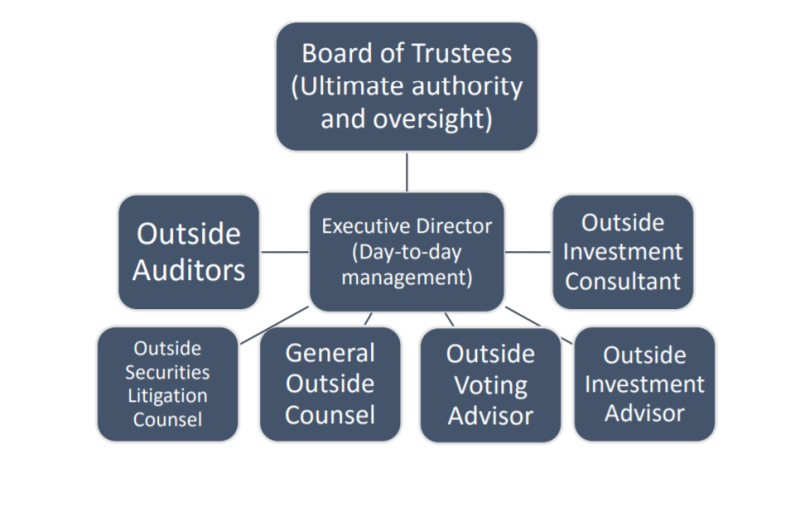 Potential conflicts of interest exist not only between a pension fund and its counsel, but between each of its advisors and auditors, as well as external political actors who may influence the appointment of trustees.  Public records, including the minutes of public sector pension funds and allegations in unsealed lawsuits, give examples of the types of potential conflicts that may arise:

Do these conflicts bedevil the Tesla settlement?  We can’t tell based on this record.  In an adversarial proceeding, a party could seek discovery from each plaintiff, just as the special master did in State Street.  Without discovery, Tesla stockholders and other observers are left to scan public records.  Sometimes, as in the State Street case, those records lead to a Boston Globe exposé.  Other times, they lead nowhere:  nothing suggests that the ATRS/Chargois relationship was ever disclosed before the special master discovered it.  The Tesla settlement is particularly opaque: only two of the plaintiffs are U.S. public-sector pension funds who make public records available.  Private institutional investors have more limited disclosure requirements.

The Tesla settlement, like most similar cases in federal courts or the Court of Chancery, appears likely to receive approval without an adversarial processes’ assurance that the plaintiffs who purport to represent absent stockholders exercise independent judgment and serve as more than mere names on a complaint.  State Street showed that undisclosed and ugly things may crawl around undiscovered and out of sight.

Ultimately, we should turn over more rocks and adjust our judicial processes when courts can no longer rely on adversarial parties to surface relevant information.  For instance, courts could more routinely appoint special masters to provide adversarial scrutiny of class settlements, or at a minimum create more robust disclosure requirements that would capture a State Street-style conflict. Courts could also address the reality that these settlement hearings more closely resemble unopposed ex parte proceedings than ordinary actions and impose expanded duties of candor on counsel. Absent judicial action, congressional leadership may be required, including amendments to the Private Securities Litigation Reform Act.

Without adversarial testing from courts or Congress, we may never know how many conflicts compromise class action settlements.  Absent some adversarial testing forcing information to the surface, troubling realities may only emerge when chance and circumstance combine to uncover the truth. State Street revealed the ATRS/Chargois relationship only because multiple law firms coincidentally made errors in their fee applications and because the Boston Globe’s Spotlight team followed up with questions.  Without reform, stockholders will have to wait for the stars to align again before the next scandal surfaces.