The following post comes to us from Prof. Ilya Beylin of Seton Hall:

On Monday, I read Ann Lipton's thoughtful and informative post, on "The Eroding Public/Private Distinction".  One of the luxuries being a business law professor offers is the space, and perhaps even community encouragement, to feel strongly about and delve deeply into esoteric albeit perhaps consequential matters such as the boundary between public and private securities markets.  Well, the feeling came, and I wrote Ann to see if I could riff on her piece in a response.  So here we are, although the more I mull over the strands in the original piece, the more I recognize the completeness of Prof. Lipton's work and the keenness of the insights there.

A definitional question is predicate to evaluating the growth of exceptions to the traditional public/private divide.  Public and private under the ’33 and ’34 Acts have two drastically different implications.  Under the ’33 Act, private typically refers to being able to conduct a securities offering outside of the SEC mediated registration process under Section 5.  Under the ’34 Act, however, private means not having to provide ongoing public disclosure on the state of the company (e.g., quarterly and annual filings, current reports).  While the ’33 Act principally governs the manner in which a primary market transaction may be conducted, the ’34 Act principally governs how secondary trading may be conducted.  Expansions of Regulation D to permit public offers to accredited investors under 506(c), relaxation of Rule 701 to enable greater distribution to employees and other service providers, Crowdfunding under Reg CF, expansion of Reg A into Reg A+, and some of the other incursions we’ve seen since 2005 into the protective sphere of Section 5 do not generally implicate the continued significance of the private/public distinction in secondary markets.

As background, the Exchange Act’s ongoing public disclosure requirements apply to three prototypical issuers: those that engaged in a public offering under the ’33 Act, those that have enough equity holders (raised, significantly, to up to 2,000 accredited investors from a prior cap of 500 as Prof. Lipton and others have keenly pointed out), and those listed on an exchange.  The realities, however, of secondary market trading mean that substantial liquidity remains largely conditional on becoming exchange listed and thus public for purposes of ongoing disclosure under the ’34 Act.

[More under the cut]

Even if a primary market offering is not viewed as public under the ’33 Act, investors in that offering may not be able to easily resell their securities unless the issuer incurs comparable disclosure expenses to a registered offering.  Although OTC trading and other off-exchange secondary markets do offer alternatives, in terms of transactional costs, it is seriously questionable that these compare to NYSE or NASDAQ (okay, perhaps BATS:) listing when seeking to provide liquidity to investors.  And even if secondary market support can be obtained without exchange listing, ’34 Act criteria limit access to the general public in resales.  It is difficult to assure the 2,000 equity investor cap is not reached if an issuer allows any substantial turnover (hence, in part, contractual restrictions on transfers jealously guarded by private companies and firmly upheld for these reasons by Delaware courts and beyond).  Thus whatever erosions may have been observed under the ’33 Act may not in practice implicate the vitality of the ’34 Act distinction between private companies and those subject to ongoing public disclosure requirements.  And while the one-time costs related to an underwritten public offering under the ’33 Act are substantial, the costs of ongoing disclosure under the ’34 Act are comparable (and, over any significant timeframe, more significant).

To what extent has the more meaningful distinction between private and public companies under the ’34 Act eroded?  Perhaps only modestly.  An increase in the 12g-1 cap is significant in allowing more capital to come in through primary markets and in allowing some transfers in secondary markets subject to careful management by the issuer.  But the increase does not fundamentally change the accessibility of secondary markets to investors in private companies.[1]  The reduced requirements for listed smaller reporting companies, and most importantly, the dispensations given to emerging growth companies permit increased secondary trading without full blown ’34 disclosure requirements.  The question then is the extent to which the erosion--both in primary markets and secondary markets--goes beyond the text? One of my hopes is that in the years to come, we see more empirical scholarship probing the consequences of these changes.

The SEC’s study of private market activity supports that some of the erosions to the conception of “public” within the primary market sphere are superficial.  Figures 2 and 3 from that release are copied below and show that all but one of the newly crafted means of running a public offering outside of the Section 5 process have not thus far proved economically viable: 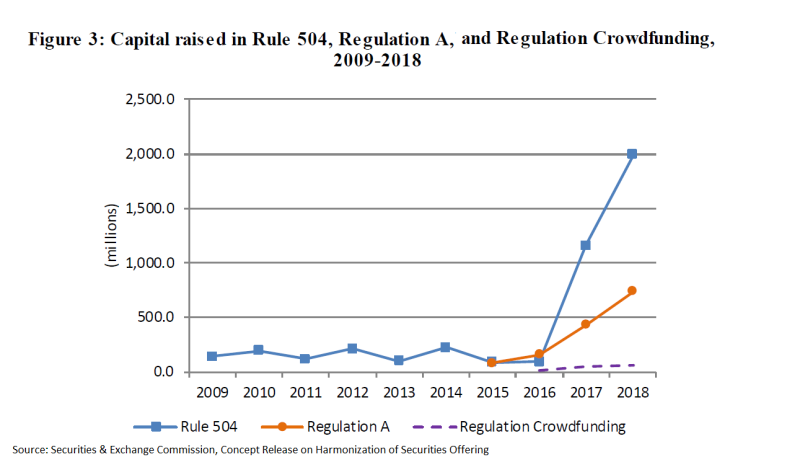 Although there is no comprehensive data on private market transactions, the two graphs viewed together provide a telling estimate.  They support that new exemptions adopted starting with the JOBS Act are used only lightly.  Rule 506(b) has for decades been a workhorse within U.S. private markets, enabling accredited investors to participate in capital formation largely on their own terms.  After the JOBS Act, Rule 506(b) remains the key workhorse but now has a pigmy pony companion in the form of 506(c), which is much the same exemption except in that it enables public marketing to accredited investors subject to greater scrutiny of their accredited status.[2]  In addition to showing the consistently immaterial sputter of Rule 504 offerings, the second chart breaks out Regulation A (including Regulation A+) offerings and Regulation CF (i.e., Crowdfunding) offerings.  These two offering regimes were billed as revolutionary expansions of access within primary markets.  Unlike Rule 506, these regimes enabled retail investors to participate in offerings made to the public but without the implications of a public offering under Section 5.  The second chart suggests that these poster children for democratizing access to capital and investment opportunities have yet to grow up.  Although the supply of private capital to U.S. issuers has been staggering over the last decade and has exceeded the supply of capital through public markets, that capital flow is predominantly routed through the long-established channel of Rule 506(b).  Among the gating items preventing serious uptake is that these exemptive provisions work for primary markets but not secondary markets, preventing investors from liquidating (here it is key to point out that even Tier 2 Reg A+ offerings remain subject to state Blue Sky laws when it comes to transfers – an issue the SEC has taken comments on but not resolved).  Importantly, the graphs do not cover any expansions of permissible equity grants to employees and other service providers under Rule 701 or the results of expanding the 12g-1 threshold.

Regulatory burdens on primary market transactions can be easily linked to popular economic frustrations – the unavailability of capital and the lack of attractive investment opportunities.  Narratives supporting tweaks in secondary markets become more complex, and quickly lose traction with a lay audience.  This keeps the reach of ongoing disclosure requirements under the ’34 Act further from populist forces.  Instead, these disclosure requirements are near and dear to more sophisticated advocates – the exchanges and the concentrated underwriting industry that takes companies through lucrative registered initial public offerings before they are listed.  As part of pitching a company to IPO, the underwriter has to convince the issuer that the costs of Section 5 and ongoing ’34 Act disclosure will not be all that significant.  That is why I suspect changes to the ’34 Act’s conception of public companies[3] are both more superficially modest and economically more consequential.  Collectively, the preceding descriptions of differences between an offering being public under the ’33 Act for purposes of primary market transactions and an issuer being public under the ’34 Act for purposes of ongoing disclosure alongside the admittedly speculative views on the constituencies and forces driving changes in the two distinct areas present some testable hypotheses.  There are likely to be erosions or perhaps even refinements under both Acts, however, these are likely to happen at different times and take different forms.

The ’33 Act will be put under pressure from retail investors after the fruition of major innovations in technology, business process, or other areas affecting the success of ventures.  This pressure will not come as a new technology is commercialized but only after its commercialization leads to exponential financial growth among a visible cohort of companies.  Similarly, but less so, should there be a negative shock to the availability of traditional means of financing young or small businesses (e.g., declines in bank loans or a correlated implosion among VC funds), the small business community will increase advocacy for relaxation of traditional conceptions of public offerings.  Alternately, the demand for these easements into the realm of Section 5 may reflect the vigor of popular discontent.  From the supply side, legal changes in the conception of the public/private divide in primary markets (at least at the retail level) are likely to be a lot of textual sizzle with little economic steak.  In contrast, pressure on the implications of going through Section 5 registration and listing on an exchange may trend with the size and productivity of underwriters and exchanges, as well as campaign contributions from the foregoing.  And on the supply side, Congress is likely to make little heralded changes that have relatively more substantial effects.

[1] For this reason, I treat the lifting of the cap as primarily affecting primary markets notwithstanding that the cap is plainly a part of the Exchange Act.

[2] The blue line tracking “Other Exempt Offerings” in the first figure also seeks to capture non-public offerings exempt under Section 4(a)(2) of the Securities Act (including where a secondary placement under Rule 144A is used) as well as offshore offerings under Regulation S.

[3] The same should be true of changes to the contents of registration statements and, to a lesser extent because of their non-saliency, changes to the liability standards for omissions and misstatements.