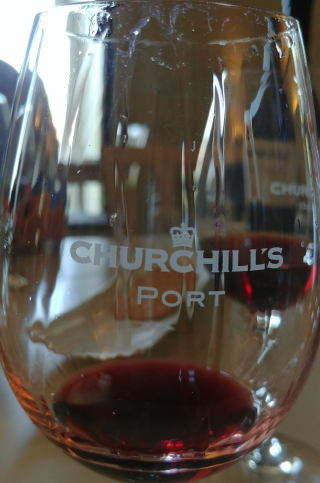 Avid BLPB readers may have noticed that I failed to post on Monday of last week.  I was traveling from Portugal to Spain that day.  I did plan to make this post then, but travel scrambles (thanks to the Porto metro) and delays (thanks to Ryanair) prevented me from getting to a computer with Internet access until late in the day.  By then, I was too exhausted to post.  So, you get last Monday's post this Monday!  No harm done; this post is not time-sensitive.

But a Graham descendant still wanted to be in the port business.  He thought he had a "better way."  So, 11 years after the Graham family sold Graham's, John Graham (not the same one, obviously!) established the Churchill port lodge.  Here's what the Churchill's website says about its formation as a business:

Churchill’s was founded in 1981 by John Graham, making it the first Port Wine Company to be established in 50 years. The Founder wanted to continue his family’s long Port tradition but at the same time create his own individual style of Port. He named the Company after his wife, Caroline Churchill.

I went to a port wine tasting at the Churchill's lodge in Vila Nova de Gaia, Portugal last Monday with my husband and daughter.  We tasted the uniqueness of the Churchill's product.  (My daughter, who is not a port wine fan, actually enjoyed what she tasted at Churchill's.)  The wine is less sweet than one would expect from a port wine.  John Graham himself explains why:

My Ports are made with as much natural fermentation, and with as little fortification brandy, as possible. I like to make wines in the most natural way. Above all I look for balance. I believe I brought this balance to Churchill’s Ports. There is a consensus around the characteristics that define our house style which are easily identified.

While we were at the tasting, we took a tour and learned the basic facts I relate here.

I was enchanted by the business story!  Headline: A Graham founds Churchill's after the Graham family sells Graham's.  A bit confusing, but a great narrative involving family business, M&A (and corporate finance more generally), intellectual property, business formation, and more.  We learned, for example, that the grapes are foot-treaded (stomped on by human feet).  Imagine the interesting employment questions.  (The shifts are twelve hours and there are stems and seeds in with the grapes . . . .)  And the tasting is still done by John Graham himself, raising questions about key man insurance and business succession planning.   (We were told that John Graham has chosen a successor taster--not a member of the family.  But we did not ask about management.)  Finally, a major real estate acquisition--buying a vineyard (Quinta da Gricha) with a special terroir--is part of the tale.

I am scheming to find ways to integrate what I learned into my teaching this year.  I know I will find places to work aspects of the story in--particularly in Advanced Business Associations and Corporate Finance.  Because I teach on a dry campus, no wine tasting will take place during the lessons.  But maybe an optional out-of-class session could be planned.  Hmmm . . . .