Da Lin recently posted Beyond Beholden, a paper tackling a new issue in director independence.  Although most corporate law focuses on whether there is a stick a controlling shareholder can use to punish directors if they fail to follow orders, Lin looked to see if she could see any carrots a controlling shareholder could use to lead a director around.  This bit from the article captures it nicely:

Lin's article looks at how controlling shareholders may reward ostensibly independent directors by appointing them to other lucrative board positions under their control.  A director who approves a sale of the company may soon find herself out of a six-figure job when the company gets absorbed through a merger.   In theory this fact cuts against the argument that the independent director simply approved the transaction to please a controlling shareholder.  If the punishment a controlling director could apply would simply be the loss of the board seat--approving the sale has the same result.  Lin looks further than others and sees that an independent director might also be motivated by the prospect of future board seats at other companies also controlled by the controlling stockholder.  To get a sense about how this works, she looked at recent freezeouts with Delaware targets.  Her research found that controllers often reappoint cooperative directors to other firms:

She closes by highlighting the implications for doctrine focused strictly on evaluating whether supposedly independent directors are "beholden" to controllers:

Judges and scholars miss half the story when they view independence solely through the lens of beholdenness and retribution.  I show that controlling shareholders can and do form repeat relationships with the nominally independent directors who serve on their boards, and the prospect of this patronage can compromise those directors’ ability to prevent controlling shareholder opportunism.

I saw Lin present the paper in 2018 at the National Business Law Scholar's Conference.  It changed how effective I thought the "beholden" standard may be as well as how to think about special litigation committees.  She was also kind enough to let me steal some slides from her presentation for when I taught director independence.  Some of the graphics in the paper may help students or executives get a real sense about these ties.  For example, this illustration shows webs of interconnected companies and director relationships: 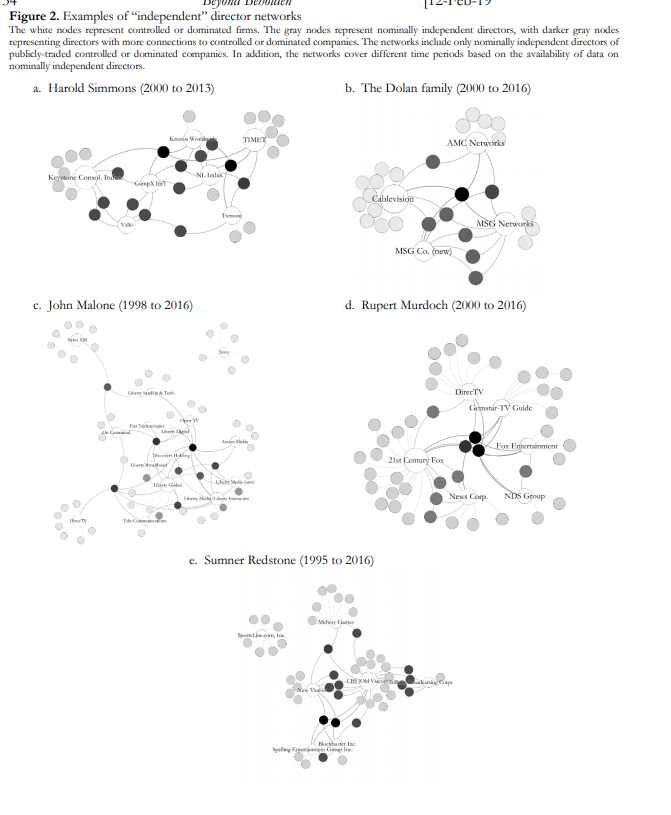 She will be joining University of Richmond School of Law in the fall.

We can't wait to have her join us in Richmond in the fall!

Congratulations on the hire! It's a fantastic paper.

Hah - you beat me, I was thinking about plugging this paper in my post! (No worries; I've got other stuff). It's really a clever analysis.

Normally, I'm reading your posts and wishing I'd written it!