Working for the Unicorn 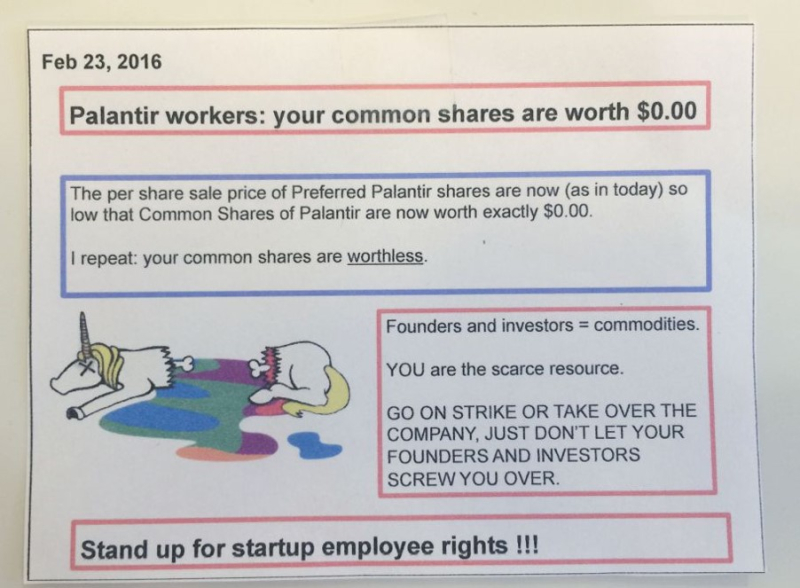 On Wednesday, I had the great pleasure of delivering an address at the North American Securities Administrators Association’s annual training conference for its corporate finance division.  I spoke about equity compensation for employees in private companies (you may recall that Joan linked to Anat Alon-Beck’s paper on that subject a couple of weeks ago).  Equity compensation to employees is exempt from federal registration under Rule 701 – and the SEC is currently deciding whether to broaden that exemption – but is still subject to state regulation.  Most states, however, simply follow the federal rules.  The purpose of my talk was to discuss some of the risks posed to employee-investors when companies stay private for prolonged periods, and to suggest that state securities regulators may want to consider if there is a need for additional oversight.

Under the cut, I offer the (massively) abridged (but still probably too long) version of my remarks.  For those interested in further reading on the subject, in addition to Anat’s paper highlighted by Joan, I recommend Abraham Cable’s excellent breakdown of the issues in Fool’s Gold? Equity Compensation and the Mature Startup.

[More under the jump]

I began by recounting the story of Good Technology.  The facts are summarized in this New York Times article, but Good Technology was a unicorn company that ended up selling itself to Blackberry for far less than its earlier valuations.  As a result, the venture capitalists with liquidation preferences were able to recover a lot of their investment; employees, who held common stock and options, were left with very little.

As I explained, Good is not unique; lots of startups either go public with lower valuations than previously expected, or fail, or stay private for prolonged periods, thus harming the employees who accepted stock and stock options as payment for their services.

As another example, Palantir has been in a long running battle with its employees, who have been chomping at the bit for a public offering so they can sell their shares.  Though Palantir was once a hot startup, it’s been struggling recently with finding and retaining clients.  It’s been in existence for 14 years and has never turned a profit, but its CEO keeps promising it will be profitable in a year or two – he’s been saying that for years.

That’s where the flyer, which I’ve included at the top of this post, comes in.  In 2016, the flyer began appearing on lampposts around Palo Alto.  The employee who created it may have overstated matters at Palantir specifically, but certainly there are legitimate concerns.  There are concerns because companies are staying private longer, which limits employees’ ability to sell their stock publicly or get a public valuation.  There are concerns because as companies stay private longer, they often conduct rounds of financing that give special preferences to institutional investors – various forms of downside protection – which end up leeching value from the common stock that employees receive.  And there are concerns because we only minimally regulate sales of securities to corporate employees.

To summarize the relevant background:

Companies are staying private longer, holding fewer IPOs, and raising larger and larger amounts of capital in private rounds of financing.  Private companies barely know what to do with all of the cash they’re raising.  Some startups are turning down the money they’re being offered; others are just growing much more quickly than they intended.

A critical factor fueling the growth of these large, private startups is the ease of paying employees in equity.

Under federal Rule 701, securities issued as part of an employee compensation plan for a private company are exempt from registration.  Though the company must make certain disclosures, they’re pretty bare bones, especially if the value of the securities issued in a 12-month period falls below $10 million.

Additionally, in 2012, the JOBS Act amended Section 12(g) of the Securities Exchange Act to provide that securities issued to employees under 701 do not count when determining whether a company has sufficient outstanding shares to trigger public reporting requirements.  So now, companies can issue very large amounts of stock and stock options to employees without registering.  And because they don’t want to cross that Section 12(g) threshold and involuntarily become a reporting company, they usually place contractual restrictions on employees’ ability to sell.

Critically, though, Rule 701 does not preempt state law.  States can place their own regulatory limits on issuances to employees, but most states have failed to do so.

Despite this hands-off attitude from regulators, as Abraham Cable points out in his essay, when equity is on the table, employees constantly have to make several investment decisions.  Do they want to accept equity as compensation, and how much should they accept?  Should they exercise an option and pay the strike price?  Should they leave the company, even if it means forfeiting unvested awards?

Are employees capable of making these decisions?  Do they have sufficient information about the risks?

First, there’s the risk inherent in this particular business. And this is where we get to the rationale behind Rule 701.  When the rule was originally enacted in the 1980s, there was not much justification given.  However, in 1999, the SEC did a big overhaul, and at that time it expressed the view that employees need fewer protections than the general public.  As the SEC put it then:

Because the compensated individual has some business relationship, perhaps extending over a long period of time, with the securities issuer, that person will have acquired some, and in many cases, a substantial amount of knowledge about the enterprise. The amount and type of disclosure required for this person is not the same as for the typical investor with no particular connection with the issuer.

So that’s the rationale.  However, and again as Abe Cable discusses, when private companies get bigger and hire larger workforces, we may reasonably ask whether these assumptions hold true, especially because – unlike public company investors – employees in private companies cannot rely on the processing power of the public markets to assist them in valuing their stock.

Second, employees have to contend with the risks associated with illiquidity (for example, ex-Uber employees went into debt to exercise their stock options and pay associated taxes, because they couldn’t sell their shares).

Third, employees have to deal with the risks inherent in the capital structure of the company.  Most of the time, when private companies conduct capital raises, new investors get preferences that guarantee them certain payouts, and these can dilute the value of the common stock held by employees.  Such terms are ubiquitous; for example, almost all unicorn financings give liquidation preferences to preferred shares, and many give downside protection against low-priced IPOs.  But when you hear about unicorn valuations, like a report that Uber is valued at $60 billion, or Good was valued at $1.1 billion, those headline numbers – called “post money valuations” – don’t take these preferences into account.  With the preferences, investors may actually be paying a lot less for the common than the announced figure.  One set of researchers did a study of unicorn financings and their terms, and they concluded that on average, post money valuations overstate the value of unicorns by 48% for the company as a whole, and by 56% for common shares alone.

Yet these figures matter to employees who are deciding what to do with their equity, and who may not appreciate how the preferences affect the value of their common shares.  Square, prior to its IPO, maintained a website with an internal stock ticker showing the estimated price rising with each private financing round – all based, as I understand it, on post money valuation, while failing to take into account that Square had granted special preferences to institutional investors that diluted the value of the common stock.  One former employee says the internal ticker sat at $16 when she got her options, and her boss told her that after the IPO, it would jump to $50.  And yes, Square is trading very highly now, but even 9 months after its IPO it was still hovering around the IPO price of $9 per share.

In light of all of this –

The SEC recently issued a concept release requesting comment on proposals to amend Rule 701 in a variety of ways.  The boldest proposal is to allow “gig economy” workers to receive grants under Rule 701.  Unsurprisingly, Uber and Airbnb think the SEC should absolutely do this.  And they’ve submitted comments to the SEC arguing that they represent the future of work and that the “entrepreneurs” who use their platforms should be entitled to share in the companies’ success.*  It probably goes without saying, but if the rationale behind Rule 701 is that employees have special insight into the business, we may reasonably question whether that insight is likely to be shared by Uber drivers and Airbnb hosts.  (As a data point, look what happened when one ride-share startup offered restricted stock units to drivers.)

The SEC is also requesting comment on a variety of proposals to amend the disclosure requirements under 701.  Among other things, the SEC is asking whether companies should be required to disclose information pertaining to fair market valuations of the stock or the options, which would take preferences into account.

In any event, the ball may land in the court of state securities regulators.

And these may be the critical questions going forward.

*Not for nothing, but check out this quote from Airbnb’s letter: “We further believe that revisions to Rule 701 could serve the beneficial goal of incentivizing individuals to leverage their existing fixed assets (such as their home) to supplement their income and participate in the sharing economy.”  Am I the only one who finds that language to be unsettlingly dystopian?

Nice work, Ann! Thanks for sharing all this. I think Miriam Cherry (SLU Law) would also be interested in this post. I will pass on a link.

Thanks, Joan - glad you enjoyed!