Hello to all from Tokyo, Japan (Honshu).  I have been in Japan for almost a week to present at and attend the 20th General Congress of the International Academy of Comparative Law (IACL), which was held last week in Fukuoka, Japan (Kyushu).  By the time you read this, I will be on my way home. 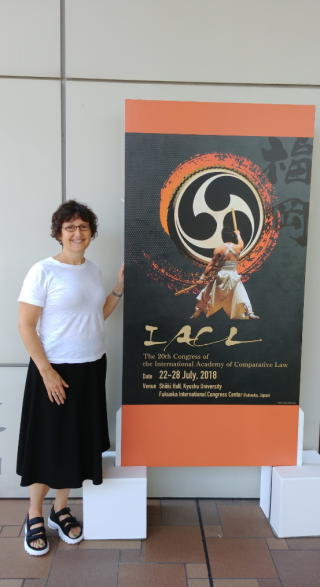 As it turns out, I was at the Congress with old business law friends Hannah Buxbaum (Indiana Maurer Law), Felix Chang (Cincinnati Law), and Frank Gevurtz (McGeorge Law), as well as erstwhile SEALS buddy Eugene Mazo (Rutgers Law).  I also met super new academic friends from all over the world, including several from the United States.  I attended all of the business law programs after my arrival (I missed the first day due to my travel schedule) and a number of sessions on general comparative and cross-border legal matters.  All of that is too much to write about here, but I will give you a slice.

I spoke on the legal regulation of crowdfunding as the National Rapporteur for the United States.  My written contribution to the project, which I am told will be part of a published volume, is on SSRN here.  The entire project consists of eighteen papers from around the world, each of which responded to the same series of prompts conveyed to us by the General Rapporteur for the project (in our case, Caroline Kleiner from the University of Strasbourg).  The General Rapporteur is charged with consolidating the information and observations from the national reports and synthesizing key take-aways.  I do not envy her job!  The importance of the U.S. law and market to the global phenomenon is well illustrated by this slide from Caroline's summary. 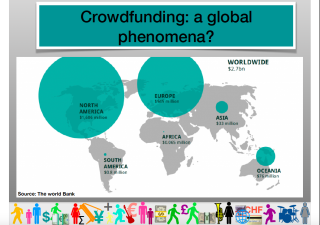 The Congress was different from other international crowdfunding events at which I have presented my work.  The diversity of the audience--in terms of the number of countries and legal specialties represented--was significantly greater than in any other international academic forum at which I have presented.  Our panel of National Rapporteurs also was a bit more diverse and different than what I have experienced elsewhere, including panelists hailing from from Argentina, Brazil, Canada, France, Germany, Poland, and Singapore (in addition to me).  At international conferences focusing on the microfinance aspects of crowdfunding, participants from India and Africa are more prominent.  I expect to say more about the individual national reports on crowdfunding in later posts, as the need or desire arises.

Frank's session on groups of companies--including what we often refer to as MNCs (multinational corporations)--offered much to think about.  I commented and asked a question about U.S. series limited liability companies and limited partnerships.  It seems that no other countries have ventured down that path--a good thing, imv.  This panel was preceded by a lunch presentation on independent directors in Asia (an uneasy transplant) and followed by a panel addressing private international law for social responsibility (where there is great variety, as one might expect).

Felix's younger scholar roundtable forum, with a section focusing on populism, raised important issues.  At the end, two significant (although perhaps obvious) points stuck in my mind: populism is not aligned with a particular politic or ideology and (or perhaps, in some cases, therefore) we should be careful about putting value judgments on its existence and ability to make change.  Not all in the room agreed with these points, btw.  Perhaps even a minority of participants agreed . . . .  But as participants revealed their country's engagement with populist forces, I understood both points well.  This work is important to my crowdfunding research.  I do address populism briefly, for example, in my forthcoming book chapter for the Cambridge Handbook of Social Enterprise Law.

Hannah's panel on optional choice of court agreements (i.e., nonexclusive court/forum selection clauses) was an eye-opener.  Who would have thought that nonexclusive and exclusive agreements on forum selection would be interpreted and enforced differently--even within a single country?  Not I.  The observations from this panel have significant consequences for cross-border mergers and acquisitions and commercial contracting.  I am likely to buy the report on this issue when it comes out.

Other sessions of note included a "Congress within the Congress" on the sharing economy (which was pretty amazing and featured information on P2P home rentals and autonomous cars, among other things) and a panel on the "right to be forgotten" (on data privacy issues).  Wow.  Lots of cutting-edge activity that really challenges national commercial, investment, and regulatory borders.

This was an energizing experience for me.  I am grateful to have had the opportunity to be part of the Congress.  If you have the opportunity (which is, I learned, a rare one) to be a National Rapporteur for an IACL Congress, you should seriously consider it.  The Congresses are only held every four years.  Apparently, the American Society of Comparative Law meets with the Congress in those years.  So, if your school is a member, you may want to consider attending the program, in any case.