I love the Kardashians. I don't watch the reality show, but I do keep up with them because I use them in hypotheticals in class and in exams for entity selection questions. The students roll their eyes, but invariably most of them admit to knowing everything about them. When the students can relate to the topic, it makes my job easier. That's why I used the SNAP IPO last year as our case study on basic securities law. Every year I pick a "hot" offering to go through some of the key principles and documents, and Snap was the logical choice because the vast majority of the students love(d) the Snapchat app. The company explained as its first risk factor "... the majority of our users are 18-34 years old. This demographic may be less brand loyal and more likely to follow trends than other demographics. These factors may lead users to switch to another product, which would negatively affect our user retention, growth, and engagement." I used myself as an example to explain that risk factor in class. I have over 100 apps on my smartphone, and I have a son in the target demographic, but I  never open Snapchat unless my six-year-old goddaughter sends me something. I just don't get the appeal even though millions of celebrities and even mainline companies use it for marketing. My students were aghast when I told them that I wouldn't invest in any stock that depended on the vagaries of their ever-changing taste. 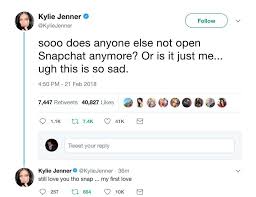 After she offhandedly tweeted that she doesn't really open Snapchat anymore yesterday, Snap lost $1.3 billion (6%) in value. This plunge added to an already bad week for Snap after Citi issued a sell rating and the company confirmed to 1.2 million change.org petition signers that its new redesign was here to stay. But it was Kylie's tweet that caused the real damage. Perhaps one of Kylie's lawyers or business managers alerted her to the fallout because she later tweeted out, "still love you tho snap... my first love." Kylie probably forgot how much power she really has. When she released a video about her pregnancy and childbirth, 24 million people watched in less than 24 hours because she had refused to allow any of her followers to see pictures of her belly. She knows marketing.

Meanwhile, after seeing Kylie's first tweet, cosmetics competitor Maybelline went on Twitter to ask its users if it should stay on Snapchat, noting that its Snapchat views had dropped dramatically. The company later deleted the tweet, but users had already voted 81% to 19% to leave on the Twitter poll.

Snap appears determined to stick to its unpopular redesign, and its CEO received a $637 million bonus last year after the IPO. Perhaps the CEO should use some of that money to pay for a new Kylie tweet. In 2016, when Kylie earned only $18 million, 20% of that haul came from social media endorsements. It looks like the President isn't the only one who can move markets with a tweet.