H & M Misses The Mark With An Ad Campaign, But Do Wall Street and Consumers Care? 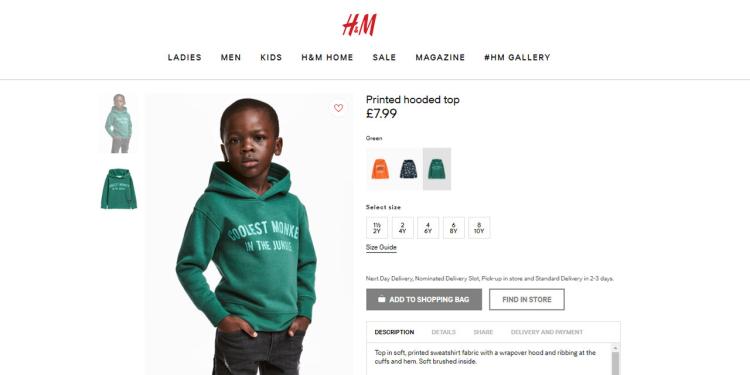 Swedish clothing giant H & M caused a huge stir this week with an ad campaign depicting a young black boy in a sweatshirt that proclaimed him the "Coolest Monkey In the Jungle."  The company's misstep is surprising given the public condemnations of the use of the word "monkey" in Europe over the past few years when soccer fans have used it as a slur against black players. Notwithstanding H & M's many apologies, several megastars have denounced the company and some have even pulled their fashion collaborations. As usual, several have called for boycotts of the retailer. But will all of this really matter? The sweatshirt was still for sale in the UK days for days after the controversy erupted, and the Weeknd, one of the megastars who vowed to never work with H & M, still has his 18-piece H & M collection available online and available for purchase on the store's  U.S. portal.

I'm headed out of the country tomorrow and in my quest for a new sweater, I glanced in the H & M store in my local mall earlier today. The store was packed and likely with fans of the artists who called for a boycott. No one was walking with picket signs outside. But as I have written about here, here, here, here and at other times on this blog, I'm not sure that young American consumers--H & M's fast fashion demographic--have the staying power to sustain a boycott. Perhaps the star power behind this boycott will make a difference (but I doubt it).Wall Street hasn't punished the store either. The stock did not take a major hit. Moreover, CNBC has reported that in December, the company reported its biggest quarterly drop in ten years. This means that H & M's pre-existing financial woes will make it even more difficult to determine whether a boycott actually affected the bottom line.

Thanks for posting on this, Marcia. I agree with your assessment. And I find the whole incident incredible.

How many people saw that page before it was posted? How many people missed the obvious? Even if the promises of designers are not kept, even if the boycott doesn't succeed, I hope that H&M takes a hard look at itself and makes changes . . . . Oy.