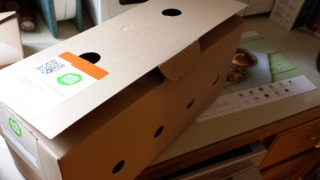 As I earlier noted, I have planned to write on meal delivery kits.  What is a meal delivery kit, you ask?  It is a delivered-to-your-door box of ingredients and recipes for meals.  All of the ingredients (except pantry essentials) needed to produce the meals shown and described in the recipe cards are included in the box.  All the recipient has to do is follow the recipe instructions and produce the meals.  Reviews of meal kits that describe additional features can be found here (July 2017), here (October 2016), here (May 2016), and here (May 2015).

My husband ordered us our first meal kit (from Blue Apron) last year as an anniversary present to me.  The idea (which has worked exceedingly well) was that we would be able to more easily prepare meals together, since I often design meals on the fly and cook based on what I sense is needed.  It's pretty hard to assign tasks consistently and continuously using my natural method of meal preparation.  The meal kits solved this problem neatly.  So, having found success with Blue Apron, we decided to try a few other brands.  Specifically, we also have ordered meal kits from Plated and Hello Fresh.  In a later post, I plan to offer a review of the kits themselves.  For today, I simply want to describe the services and the market.

It's been a healthy market from a financing and financial point of view. Accordingly to a TechCrunch article published back in April, "U.S. meal kit delivery startups have raised more than $650 million in venture capital . . . ."  The same article reported that "[m]eal kit companies sold between $1 billion and $1.5 billion in 2016, according to industry estimates from MarketResearch and others."  Yet, Blue Apron's initial public offering ("IPO") was not as successful as all had hoped.  An August 2017 CNBC report noted that the Blue Apron IPO priced on June 29, 2017 after decreasing the expected offering price range significantly (from $15-$17 per share to $10-$11 per share).

Legal claims brought against and by meal kit delivery firms so far seem to be typical of those in any business, based on published reports.  For example, a BuzzFeed News October 2016 article reported on workplace safety and other worker-related issues at Blue Apron.  A brief search on Westlaw relating to the three services we have used revealed a run-of-the-mill wrongful termination action (Hello Fresh), a case involving defamation and interference with business relations (Blue Apron), and a racial discrimination, harassment, and related retaliatory wrongful termination claim (Plated).  In addition, Blue Apron participated in a successful arbitration in the World Intellectual Property Association over the right to the domain name <blue apron.reviews>.

Notably absent?  Customer actions relating to advertising or the food or recipes included in the meal delivery kits.  It may be that these are just not publicly reported or available.  Or it may be that these types of problems are resolved amiably without the need of judicial or alternative dispute resolution processes.

Have you tried these meal services?  What are your impressions of the business model and the service?  Are they just a passing fad, or will they survive the test of time?  I am interested in your thoughts.