Christmas Cheer for All!? 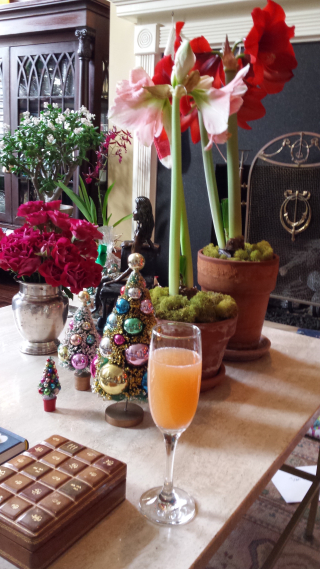 Merry Christmas to all celebrating today.  I am enjoying a white Christmas in Pittsburgh, Pennsylvania with my dad and my brother and his husband, joined later today by my son and his fiancée (who had to work the night shift last night--she's a hospital nurse).  For the first time in many, many years--I think since before I was married in 1985--I am separated from my husband this Christmas.  He is back in Tennessee with my daughter, who celebrated her 26th birthday yesterday.  Their work schedules didn't accommodate holiday travel this year.  My daughter, in particular, worked yesterday and will work again tomorrow.  The working world is a different place now during the holidays than it was when I was a child.

As I sit here with a blood orange mimosa on Christmas morning, that observation set me to thinking about blue laws and Christmas.  (Ann and I are thinking along similar lines this week, it seems . . . .)  A lot of folks save their shopping--including shopping for alcohol--until somewhat the last minute.  This year, Christmas is on a Monday, meaning that Christmas Eve--a prime shopping day--was on a Sunday.  I wondered whether any blue laws prevented stores from being open or alcohol from being sold yesterday (or today, for that matter) . . . .

Back in 2006, when Christmas also was on a Monday, National Public Radio's All Things Considered covered this story from a South Carolina perspective.  Tennessee law, TCA § 57-3-406(e) (2016), provides as follows:

No retailer shall sell or give away any alcoholic beverage between eleven o'clock p.m. (11:00 p.m.) on Saturday and eight o'clock a.m. (8:00 a.m.) on Monday of each week. No retail store shall sell, give away or otherwise dispense alcoholic beverages except between the hours of eight o'clock a.m. (8:00 a.m.) and eleven o'clock p.m. (11:00 p.m.) on Monday through Saturday. The store may not be open to the general public except during regular business hours. Likewise, all retail liquor stores shall be closed for business on Thanksgiving Day and Christmas Day.

So, folks in Tennessee could not buy drinking alcohol yesterday from any store but can buy spirits today (absent applicable local ordinances to the contrary) from a retail store that is not a liquor store (if I am reading that correctly).

Massachusetts, my immediate former home state, has many exceptions to its blue laws, including allowing certain retail establishments to be open on Sundays, provided that rank-and-file (non-executive, non-administrative over a certain pay grade) retail employees are paid time-and-a-half if the business employs more than seven people.  See MGL c. 136, § 6(50).  This exception does not apply to any state-defined legal holiday (and to Christmas, when it is on a Sunday), but the exception does apply to the day following Christmas when Christmas occurs on a Sunday.  The exception for alcohol sales is more detailed and includes:

The retail sale of alcoholic beverages not to be drunk on the premises on Sundays by retail establishments licensed under section 15 of chapter 138; provided, however, that notwithstanding this chapter, a municipality may prohibit the retail sale of alcoholic beverages on Sundays by licensees under section 15 by vote of the city council or board of selectmen; provided further, that there shall be no such sales prior to the hour of 10:00 a.m. or on Christmas Day if Christmas occurs on a Sunday; and provided further, that establishments operating under this clause which employ more than 7 persons shall compensate all employees for work performed on a Sunday at a rate of not less than one and one-half of the employee's regular rate. No employee shall be required to work on a Sunday and refusal to work on a Sunday shall not be grounds for discrimination, dismissal, discharge, deduction of hours or any other penalty.

Whoever on Sunday keeps open his shop, warehouse, factory or other place of business, or sells foodstuffs, goods, wares, merchandise or real estate, or does any manner of labor, business or work, except works of necessity and charity, shall be punished by a fine of not less than twenty dollars nor more than one hundred dollars for a first offense, and a fine of not less than fifty dollars nor more than two hundred dollars for each subsequent offense, and each unlawful act or sale shall constitute a separate offense.

Even where retail establishments may be open, states may regulate work on Christmas--and on other holidays, too--designated as legal holidays by the state.  I grew up with a system of federal and state holidays that serve this purpose.  But The Legal Genealogist tells us that Christmas has not been a government-designated holiday from work for very long.  The Tennessee list for 2017 can be found here.  The Massachusetts legal holiday list is here.

Anyway, lest I bore you with my holiday blue law musings, I will close now by wishing you a happy continuing holiday season from here in Pittsburgh. Enjoy time with and memories of family and friends.  From my house to yours, this brings wishes for a lovely holiday week.  Enjoy.

The Tennessee statute banned sales of wine and spirits starting at 11:00 on Saturday evening and recommenced on Tuesday morning at 8:00. Needless to say, the stores in Nashville had advertised this to their patrons.

Interesting, Tom N. Given the differences I saw from place to place on how this all is handled (in "researching" the post), advertising the restrictions seems like a retailing best practice over the holidays. People visit across state lines, which may make some of the limitations problematic.

Tennessee has an interesting history with the sales of alcohol - especially given our reputation for "moonshining." Although Prohibition was repealed in 1933, Tennessee waited until 1939 to implement its “local option” statute and imposed a three tier system (wholesaler, manufacturer and retailer). Although a three tier system was prevalent in many States, a number of other States actually “own the system.” What I mean by that is that the State government owns the entire distribution network including the retailers (ex., New Hampshire: stores sell all wine and spirits). Then, there are State hybrids where the government only retains ownership of the retailers that sell spirits (ex., North Carolina: beer and wine sold in groceries and convenience stores).

Because of Tennessee’s adoption of the “local option” system, we still have a number of wet (allows sale) and dry (no wine and spirits sales) counties and communities. In fact, Nashville being the first metropolitan government in the US and as part of the consolidations of Davidson County, each incorporated community entered into the metropolitan government with the wet or dry status that existed at the time of formation. Thus, there remain communities within Davidson County that remain dry despite alcohol sales simply being blocks away.

Another method that Tennessee undertook as a result of dry county limitations was to adopt the Tennessee River Resort District Act which permitted communities having restaurant with over 75 person seating capacity located within 3 miles of the center of the Tennessee River – by vote of a county commission – to allow liquor by the drink.

Despite pretty seismic changes in the manufacture and sales of alcohol in Tennessee [since the 1980’s, we have gone from 2 legal distillers to 29; 12 wineries to 50, and grown to over 80 microbreweries] we are still heavily wedded to the three tier system. Despite statutory changes allowing for grocers to sell wine and beer reflective of “liquor by the drink,” in Tennessee one may only own an interest in (1) a manufacturer, (2) a wholesaler or a (3) retailer.

Wow, Tom N. Fun stuff. I knew some of this because I attended a beer-industry CLE earlier this year. But this is a lot of great information. Many thanks.