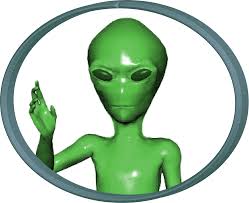 A former student brought this fundraising website to my attention: To the Stars Academy of Arts and Sciences ("TTS Academy). (Image above from a Creative Commons search).

I couldn't make this up. And I did spend some time trying to determine if it was a joke, but TTS Academy's 63-page offering circular suggests that it is no joke. And TTS Academy appears to have already raised over $500,000.

According to the organization's website, Tom DeLonge of Blink-182 fame is in fact the CEO and President. Supposedly, DeLonge has teamed with former Department of Defense official Luis Elizondo who confirmed to HuffPost that the TTS Academy is planning to "provide never before released footage from real US Government systems...not blurry, amateur photos, but real data and real videos." Rolling Stone reports that "DeLonge has long been interested in UFO and extraterrestrial research. After parting ways with Blink-182 in 2015, he delved deeper into the subject, releasing the book Sekret Machines: Gods earlier this year and he's also working on a movie that is related to those interests called Strange Times." TTS Academy is a Public Benefit Corporation, formed in Delaware.

The TTS Academy website states: "To The Stars Academy is a Public Benefit Corporation (PBC), which means our public benefit purpose is a core founding principle of our corporate charter alongside the traditional goal of maximizing profit for shareholders." Hmm... How does one pursue a public benefit purpose and seek to maximize profit for shareholders? A main point of benefit corporations is liberate companies from the perceived restrictions of shareholder wealth maximization.

The website continues: "Our public purpose: Education - Community - Sustainability - Transparency. PBCs have enjoyed a surge in popularity as the public becomes more interested in corporate responsibility, transparency, and more recently, the concept of impact investing.* It’s clear that an expanding portion of the general population is looking to make an impact on the world around them, not only through volunteering, or speaking out on social media, but through financial decision making.** We believe raising resources through Regulation A+ crowdfunding will allow us to expedite expansion of TTS Academy’s PBC initiatives, like promoting citizen science, enhancing traditional education with science, engineering and art-related programming, supporting veterans and their families, and promoting underrepresented people in film." Color me skeptical.

As Professor Christine Hurt noted way back in 2014/15, the crowdfunding and social enterprise circles may overlap significantly. Professor Hurt wrote, "for-profit social entrepreneurship may find equity crowdfunding both appealing and available. For-profit social entrepreneurs may be able to use the crowdfunding vehicle to brand themselves as pro-social, attracting individual and institutional cause investors who may operate outside of traditional capital markets and may look for intangible returns. Just as charitable crowdfunders rebut the conventional wisdom that donors expect tax-deductibility, prosocial equity crowdfunders may rebut the conventional wisdom that early equity investors expect high returns or an exit mechanism." Not sure if she, or any of us, predicted exactly this type of company.