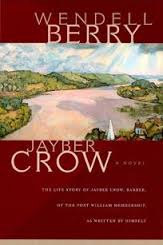 Set in rural Kentucky, Jayber Crow is a story about small town life, community, love/hate, sustainability, and industrialization. The main character, Jonah "Jayber" Crow loses both his parents and his Aunt and Uncle by the age of ten. He spends the next few years in an orphanage before obtaining a scholarship to a local college as a "pre-ministerial" student. Doubting his calling to the ministry, Jayber drops out and returns to his hometown. He serves as the town's only barber, and he also picks up jobs as the local grave digger and church janitor. Jayber narrates, in vivid detail, the exodus from the small town by the younger generation and the invasion of large-scale, profit-focused, corporate farming.

The author, Wendell Berry, warns that "persons attempting to explain, interpret, explicate, analyze, deconstruct, or otherwise 'understand' [this book] will be exiled to a desert island in the company only of other explainers" so I will simply end with a few of my favorite quotes below. I think one of the reasons I so liked this book is because it reminded me of my family's property and of my maternal grandfather, who lived at a pace unknown to most of us and who worked the land with his hands and simple tools.

"You have been given questions to which you cannot be given answers. You will have to live them out--perhaps a little at a time." (54)

"The university thought of itself as a place of freedom for thought and study and experimentation, and maybe it was, in a way. But it was an island too, a floating or a flying island. It was preparing people from the world of the past for the world of the future, and what was missing was the world of the present, where every body was living its small, short, surprising, miserable, wonderful, blessed, damaged, only life." (71)

"Instead of sitting out and talking from porch to porch on the summer evenings, the people sat inside rooms filled with the flickering blue light of the greater world." (258)

"We were, as we said again, making war in order to make peace We were destroying little towns in order to save them. We were killing children in order that children might sleep peacefully in their beds without fear." (294)

"On those weekends, the river is disquieted from morning to night by people resting from their work. This resting involves traveling at great speed, first on the roads and then on the river. The people are in an emergency to relax." (331)

"The Economy does not take people's freedom by force, which would be against its principles, for it is very humane. It buys their freedom, pays for it, and then persuades its money back again with shoddy goods and the promise of freedom." (332)

Update: Here is a trailer for a new film on Wendell Berry, Look & See. Powerful, especially if you grew up in a rural place that is now being "developed," or if have seen beautiful landscapes that you love ruined. "Those who had wanted to go home could never get there now...."