General Electric (GE)  and Baker Hughes (BHI) announced on Monday, October 31st, a proposed merger to combine their oil and gas operations.  GE and Baker Hughes will form a partnership, which will own a publicly-traded company.   GE shareholders will own 62.5% of the "new" partnership, while Baker Hughes shareholders will own 37.5% and receive a one-time cash dividend of $17.50 per share.  The new company will have 9 board of director seats:  5 from GE and 4 from Baker Hughes.  GE CEO Jeff Immelt will be the chairman of the new company and Lorenzo Simonelli,  CEO of GE Oil & Gas, will be CEO. Baker Hughes CEO Martin Craighead will be vice chairman.

Reuters is describing the business synergies between the two companies as leveraging GE's oilfield equipment manufacturing ("supplying blowout preventers, pumps and compressors used in exploration and production") and data process services with Baker Hughes' expertise in " horizontal drilling, chemicals used to frack and other services key to oil production."

Baker Hughes had previously proposed a merger with Halliburton (HAL), which failed in May, 2016, after the Justice Department filed an antitrust suit to block the merger. Early analysis suggests that the proposed GE & Baker Hughes will pass regulatory scrutiny because of the limited business overlap of GE and Baker Hughes.

As I plan to tell my corporations students later today: this is real life!  A high-profile, late-semester merger of two public companies is a wonderful gift.  The proposed GE/Baker Hughes merger illustrates, in real life, concepts we have been discussing (or will be soon) like partnerships, the proxy process, special shareholder meetings, SEC filings, abstain or disclose rules, and, of course, mergers. 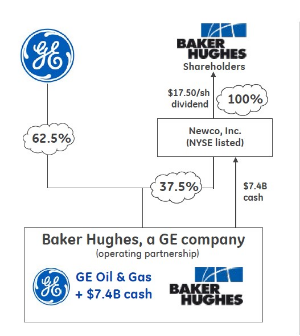