Book Spotlight: Empire of the Fund by William Birdthistle

Professor William Birdthistle at Chicago-Kent College of Law is publishing his new book, Empire of the Fund with Oxford University Press.  A brief introductory video for the book (available here) demonstrates both Professor Birdthistle’s charming accent and talent for video productions (this is obviously not his first video rodeo). Professor Birdthistle has generously provided our readers with a window into the book’s thesis and highlights some of its lessons.  I’ll run a second feature next week focusing on the process of writing a book—an aspiration/current project for many of us.

Empire of the Fund is segmented into four digestible parts:  anatomy of a fund describing the history and function of mutual funds, diseases & disorders addressing fees, trading practices and disclosures, alternative remedies introducing readers to ETFs, target date funds and other savings vehicles, and cures where Birdthistle highlights his proposals. For the discussion of the Jones v. Harris case alone, I think I will assign this book to my corporate law seminar class for our “book club”.  As other reviewers have noted, the book is funny and highly readable, especially as it sneaks in financial literacy.  And now, from Professor Birdthistle:

The SEC does practically zero enforcement on fees.  [pp. 215-216]  Even though every expert understands the importance of fees on mutual fund investing, the SEC has brought just one or only two cases in its entire history against advisors charging excessive fees.  Section 36(b) gives the SEC and private plaintiffs a cause of action, but the SEC has basically ignored it; even prompting Justice Scalia to ask why during oral arguments in Jones v. Harris?  Private plaintiffs, on the other hand, bring cases against the wrong defendants (big funds with deep pockets but relatively reasonable fees).  So I urge the SEC to bring one of these cases to police the outer bounds of stratospheric fund fees.

The only justification for 12b-1 fees has been debunked.  [pp. 81-83]  Most investors don't know much about 12b-1 fees and are surprised by the notion that they should be paying to advertise funds in which they already invest to future possible investors.  The industry's response is that spending 12b-1 fees will bring in more investors and thus lead to greater savings for all investors via economies of scale.  The SEC's own financial economist, however, studied these claims and found (surprisingly unequivocally for a government official) that, yes, 12b-1 fees certainly are effective at bringing in new investment but, no, funds do not then pass along any savings to the funds' investors.  I sketch this out in a dialogue on page 81 between a pair of imaginary nightclub denizens.

Target-date funds are more dangerous than most people realize.  [pp. 172-174]  Target-date funds are embraced by many as a panacea to our investing problem and have been extremely successful as such.  But I point out some serious drawbacks with them.  First, they are in large part an end-of-days solution in which we essentially give up on trying to educate investors and encourage them simply to set and forget their investments; that's a path to lowering financial literacy, not raising it (which may be a particularly acute issue if my second objection materializes).  Second, TDFs rely entirely on the assumption that the bond market is the safety to which all investors should move as they age; but if we're heading for a historic bear market on bonds (as several intelligent and serious analysts have posited), we'll be in very large danger with a somnolent investing population

Original ideas (I hope!) in Empire of the Fund:

Thrift Savings Plan.  [pp. 212-215]  One of my proposals for fixing our system is to open the Thrift Savings Plan to all Americans, so that the unemployed, the self-employed, those employed at small businesses, and anyone else who wishes, can participate in a system run by an excellent private advisor (BlackRock, not "government bureaucrats") at rock-bottom prices like the TSP's 2.9 basis points.  Some states (such as California) are exploring such a collective pool -- and multi-employer pools are possible though ineffective so far -- but I believe the larger the pool, the better.  Particularly since the TSP is up and running effectively as proven concept.  This plan would capitalize upon the benefits of massive economies of scale without requiring the government or employers to provide a financial guarantee (which always seem to misjudge the burden, as in pensions, the PBGC, and Social Security).  (After I wrote this proposal, I saw that Marco Rubio mentioned it during his presidential campaign but offered almost no details.)  This proposal is a better alternative, I believe, to common progressive or Democratic plans simply to buttress Social Security and conservative or Republican plans simply to privatize investing without pooling investors' bargaining power.

Financial Licensing.  [pp. 207-212]  Perhaps my most controversial proposal would be to require financial licenses for any investors who wish to direct their 401(k) investments into any funds that are not QDIAs (qualified default investment alternatives, such as large, diverse, passively managed funds).  I discuss the obvious objections: it's too onerous -- how dare you limit my use of money (but 401(k)s are voluntary government plans that provide a tax benefit and already impose lots of requirements); it's too weak -- financial licensing won't work (but it could, since it would provide detailed guidance just as investors are about to invest their savings and, at the very least, it could signal the importance and danger of personal investing); it's too much governmental intrusion (but it may actually promote a libertarian outcome, as anyone who chooses to get one of these financial licenses, then invests in actively managed funds and does poorly in them will, to some degree, have waived their abilit

What will failure look like?  [pp. 205-206]  For all the discussion of problems with our retirement system, we don't hear many concrete descriptions of what the failure of that system might look like: on these pages, I posit that either it will be a massive expansion of the poor in our society, which is already exhibiting historic inequality, but tolerated as we tolerate so much poverty in our midst; or it will spur our most politically active voting bloc, the elderly, to demand a bailout of their empty retirement accounts (with all the problems and expenses attendant with post-hoc bailouts).

BLPB Question:  Everyone wants their book to be a NYT best seller and read by everyone, but if you had to pick 2 audiences to read your book, who would they be?

The old and the young.  The elderly, of course, are wrestling everyday with the burden of eking financial support out of their investment accounts, and the book most directly explores that project.  From what I can tell, they're also the only people who read books anymore.  The young, on the other hand, actually have time to prepare for their future and to influence policymakers to improve our system.  The young are also going to need a lot of time because (a) their reliance on 401(k)s alone will be amongst the highest ever and (b) they'll be beginning well behind the start line with their record burdens from student debt.  Alas, my sense is that a book may not be the best way to reach that audience -- perhaps I can Tweet the book out sentence by sentence, or Instagram a few sepia-hued shots of selected pages. 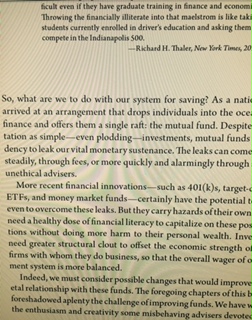 Look for more excerpts from our conversation regarding writing and teaching next week.