The Pep Boys – Manny, Moe & Jack (NYSE:  PBY) merger triangle with Bridgestone Retail Operations LLC and Icahn Enterprises LP is proving to be an exciting bidding war.  The price and the pace of competing bids has been escalating since the proposed Pep Boys/Bridgestone agreement was announced on October 16, 2015.  Pep Boys stock had been trading around $12/share. Pursuant to the agreement, Bridgestone commenced a tender offer in November for all outstanding shares at $15.

Icahn Enterprises controls Auto Plus, a competitor of Pep Boys, the nation's leading automotive aftermarket service and retail chain.  Icahn disclosed an approximately 12% stake in Pep Boys earlier in December and entered into a bidding war with Bridgestone over Pep Boys.  The price climbed to $15.50 on December 11th, then $17.00 on December 24th. Icahn Enterprises holds the current winning bid at $18.50/share, which the Pep Boys Board of Directors determined is a superior offer.  In the SEC filings, Icahn Enterprises indicated a willingness to increase the bid, but not if Pep Boys agreed to Bridgestone's increased termination fee (from $35M to 39.5M) triggered by actions such as perior proposals by third parties.  Icahn challenged such a fee as a serious threat to the auction process.

Regardless of which company ends up claiming control over Pep Boys, this is a excellent example of sale principles in action and also shows the effect of merger announcements (and the promised control premiums) have on stock prices.  This will be a great illustration to accompany corporations/business organizations class discussions of mergers and the role of the board of directors.  For those teaching unincorporated entities as a separate course or component of the larger bus.org survey course, Icahn Enterprises is a publicly-traded limited partnership formed as a master limited partnership in Delaware-- BONUS!  Bridgestone Retail Operations LLC, as in limited liability company, is a wholly-owned subsidiary of Bridgestone Corporation ADR, a publicly traded corporation. 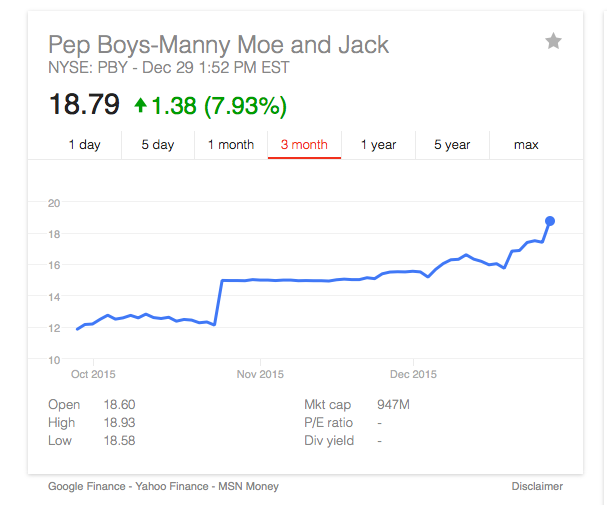 See you all in the New Year!  Anne Tucker

EDITED January 4, 2016.  Based on the thoughtful observations of fellow BLPB editor Haskell Murray, I removed the inarticulate references to this bidding war as a "Revlon" transaction.  As Haskell pointed out, Pep Boys is a Pennsylvania corporation and subject to a constituency statute.  The constituency statute modifies directors' "Revlon" duties by authorizing (but not requiring) directors to consider:

The effects of any action upon any or all groups affected by such action, including shareholders, members, employees, suppliers, customers and creditors of the corporation, and upon communities in which offices or other establishments of the corporation are located.

Interesting news, and I have been following it as well. Important to note that Pep Boys is a PA corp. Looking forward to seeing whether PA law leads to a different outcome than we think DE would.