Better Teaching Idea: Try to Notice When the Wind Is at Your Back

About four years ago, despite decades of actively avoiding the idea, I started running. I am no Forrest Gump, but I run 3.5 miles on a reasonably regular basis– usually four or five times a week, sometimes more, and rarely less.   My primary running locations, North Dakota and then along the Monongahela River in West Virginia, are both quite windy.  The North Dakota winds so are significant, that they can mimic hills, which is what allowed cyclist Andy Hampsten to train for hills in “one of the flattest areas in the world.”

I do a lot of out-and-back runs – out 1.75 miles and back along the same route.  During such runs, I often notice a similar phenomenon: I may not have any idea it’s windy if the wind is at my back when I start running.  When I get to my turnaround, though, I find a stiff wind in my face. This happens enough that I should probably figure out it is windy before I get to the turnaround, especially since it can lead to a faster pace on the way out, but I still rarely notice.  I just think I’m having a good pace day.

During these runs, it often makes me think about how many other places (in the figurative sense) this happens.  We all have our challenges, and we often have much to overcome.  But some have more challenges than others.  Because our individual challenges are real, it can be easy to miss that we may have fewer challenges than other people have.

The things that are barriers to our goals are sometimes obvious to us. For example, as those in the current job hunt for a law professorship likely know, a lack of a top-14 law degree can be a significant limit on the number of options one might have entering the legal academy.  It certainly felt like a barrier to certain jobs when I was on the market, anyway.

Because of that, it would be easy to discount other benefits I have because of who I am. I grew up in a safe neighborhood with good schools.  I am a white male, which means people have expectations for me that are different than others.  There is a level of presumed competence.  And, comparatively, presumed authority and ability.  If there's no more text visible, please click below to read the whole post.

Though life for a white male is not as Eddie Murphy famously once portrayed it, there are often unseen benefits to being who I am; benefits that are unrelated to the content of my character. In short, there’s often wind at my back that I don’t even notice.

What does this have to do with the Business Law Prof Blog? A lot, I think.  First, as teachers, we need to recognize the potential we have for biases or expectations we have in our classrooms. Are we treating each student fairly in classroom discussions or are we harder (or easier) on certain populations? Do we create an environment that seeks to facilitate inclusion or do we create or maintain artificial and unintended barriers to participation? (Students would be well served to think about their own biases, too.)

One can decide that a difficult environment – and one that is more traditional in nature – may be the best for students to learn and develop as lawyers.  That’s not my take, but it can be a reasonable view.  But that view is only reasonable if it is determined after careful thought in which one weighs the alternatives and assesses the benefits of the methods used in the classroom.  Simply maintaining the status quo, without more, is not sufficient to be the thoughtful and intentional teacher each student deserves.

A recent article in the Washington Post helps illustrate the challenges we face in overcoming our biases.  The article is written by Lawrence Otis Graham, and it’s a powerful reminder that, although we have made significant progress on issues of race and other discrimination, we’ve hardly figured everything out.  Graham notes, and (appropriately) laments, the fact that he and his wife could not, despite their best efforts, shield their children from the realities of racial bias.  Some may find this hope naïve, and I suspect Mr. Graham would agree, but it’s hard to argue with the desire.

The article talks about how the Grahams’ son encounters overt and scary racism, when two white men engaged him directly.

Two men leaned out of the car and glared at him.

“Are you the only nigger at Mellon Academy?” one shouted.

Certain that he had not heard them correctly, my son moved closer to the curb, and asked politely, “I’m sorry; I didn’t hear you.”

But he had heard correctly. And this time the man spoke more clearly. “Only … nigger,” he said with added emphasis

This is clearly horrible and offensive, and I think the vast majority of people would agree. I don’t worry about that.  The problem is that many people think that if a person wouldn’t do something like that, then the person would not act in a racist manner.  People can still perpetuate harmful stereotypes and institutional biases even if they aren’t engaing in overt and aggressive racists.  It’s just more subtle, and in many ways, it is harder to overcome less overt (and often unintended) acts. 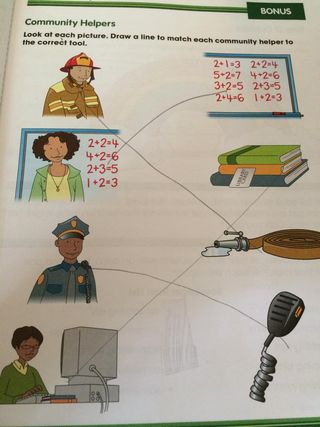 Gender bias often operates similarly. There’s a reason little girls often see teacher, librarian, and nurse as occupations more clearly than fire fighter, scientist, or lawyer. See, for example, this worksheet that was my daughter’s homework. If we don’t work at it, it’s likely that potentially harmful norms and expectations are being reinforced.

This is not as easy as saying, “Racism is bad,” and, “We're all equal.”  There are challenges we all have in our interactions, and overcoming biases to understand others is often difficult. Mr. Graham closes his article this way:

Let me say that to acknowledge that white male privilege exists does not mean that white privileged men are hostile or racist — or that all bad things that happen to black people are occurring only because of racial bigotry. But I am no better able to explain the lackadaisical response of the two white men to whom I reported the incident than I am able to explain the motives of the two white men who called my son a nigger in the first place.

And perhaps this is why it is so difficult to fairly and productively discuss the privilege (or burdens) that are enjoyed (or endured) by groups to which we don’t belong. Try as I may to see things from the perspective of a white person, I can see them only from the experience that I have as a black man and had as a black boy. As we observe each other and think that we have a close understanding of what it means to be black, white, Hispanic, Asian, male, female, rich or poor, we really don’t — and very often we find ourselves gazing at each other through the wrong end of the telescope. We see things that we think are there but really aren’t. And the relevant subtleties linger just outside our view, eluding us.

As such, I offer this modest suggestion.  If we want to be better teachers, better lawyers, and better people, we’d all do well to try to recognize when the wind might be (or might have been) at our backs.  At various times, because of our race, gender, sexual orientation, class, religion, familial situation, education, or other reality, we have faced challenges, feeling the wind blowing directly in our faces. But at some point, most of us had the wind at our back, at least as compared to someone else.  And certainly, some of us have had the help more than others.

Recognizing the challenges others face does not make our challenges less real or our accomplishments less significant. It just gives us the chance to have a closer, if not full, understanding of the challenges others face.  Ideally, that can make us more fair, more accessible, and more reasonable. It is right to try, especially for those of us who have reaped the benefit of the wind at our backs more often than others.

You and my husband are like running partners--separated by many miles . . . .

Bravo, on the substance of this post, Josh. I often forget how much wind I really have at my back--untold blessings. Yet, I sometimes fail to use the strength that derives from that benefit to re-double my efforts to move forward and push against the wind when it is trying to push me backwards. As someone who has focused a lot of attention on sex and gender, I admit that the workbook picture you included is worth well more than 1000 words.

Bottom line: this post is inspiring and empowering. Many thanks. Made my day.

Thank you, Joan. That means a lot to me. This is a piece I have been trying to write for a while. I am not sure I got quite where I was hoping, but I felt it was time to be said.