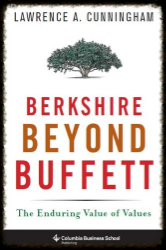 You may think of Warren Buffett as a savvy stock picker but his greater accomplishment is in configuring an exceptionally strong corporation that defies widespread conceptions of effective corproate governance.

Since early in his career, Buffett adopted what he calls the double-barreled approach to capital allocation, meaning both stock picking and business buying. He gained prominence primarily as an investor in stocks, championing a contrarian investment philosophy.

Attracting three generations of devoted followers to a school of thought called “value investing,” he doubted the market’s efficiency and deftly exploited it. Buffett bought stocks of good companies at a fair price, assembling a concentrated portfolio of large stakes in a small number of firms. Today, nearly three-fourths of Berkshire’s stock portfolio consists of just seven stocks.

But late in his career, beginning around 2000, Buffett shot more often through the other half of his double-barreled approach: buying 100 percent of companies run by trusted managers given great autonomy. True, Berkshire early on bought all the stock of companies such as Buffalo News and See’s Candies. But, through the 1990s, the first barrel dominated, with Berkshire consisting 80 percent of stocks and 20 percent owned companies. That mix gradually reversed and recently flipped, making subsidiary ownership the defining characteristic of today’s Berkshire.

Owning primarily subsidiaries rather than merely stocks gives Berkshire a different shape compared to its previous character as the holding company of a famed investor. After all, even for a buy-and-hold investor, stocks come and go. Berkshire has sold the stocks of many once-fine companies, including Freddie Mac, McDonald’s, and The Walt Disney Company.

In contrast, aside from a few Berkshire subsidiaries that it acquired from the Buffett Partnership in the 1970s, Berkshire has never sold a subsidiary and vows to retain them through thick and thin.  Despite their variety, moreover, Berkshire companies are remarkably similar when it comes to corporate culture, which is the central discovery I document and elaborate in my upcoming book, Berkshire Beyond Buffett: The Enduring Value of Values.

When Berkshire consisted mostly of the stock portfolio of a famed stock picker, you could expect that, once that investor departed, the portfolio would naturally be unwound and the company dissolved. Now, however, with Berkshire made of companies not stocks, its life expectancy stretches out in multiple decades, not mere years. It certainly goes beyond the stock picker who founded it.  That's not an accident either, as the dominant cultural motif at Berkshire and its subsidiaries is a sense of permanence--the longest possible time horizon imaginable.

With as many as five hundred operating units sprouting out of fifty primary Berkshire subsidiaries engaged in a wide range of manufacturing, retail, services, transportation, and energy businesses, the conglomerate looks more diverse than the rainbow coalition.  But as the stories in my book take you beneath the surface into the guts of these operations, you find thoroughgoing unity bound together by a discrete set of salient values.

Second to permanence, the most important of these values is autonomy, giving decision making power to those closest to the matter: headquarters gives enormous leeway to the C-suites of subsidaries where managers, in turn, put power in the shop floors of manufacturing companies and counters at retailers; the underwriters at insurance companies and scientists at chemical companies; and distributors, franchisees, sales reps and other employeess across the operation.

Berkshire’s unified culture, founded on profound attitudes such as permanence and autonony, offers several advantages. For one, it has a remarkable capacity to absorb a wide variety of different businesses within a single family. That is an awe-inspiring feat when you think about how difficult it is for many companies to merge their cultures, from famous cases such as Time and Warner to more subtle ones such as Gillette and P&G.

More broadly, at Berkshire and other companies, corporate culture translates into business performance. For example, a company whose management and shareholders embrace a long-term outlook can better weather financial volatility. Companies with reputations for thrift and conservatism--other Berkshire traits--are less likely to default and therefore enjoy higher credit ratings and lower borrowing costs; stock prices of such companies tend to be less volatile, attracting investors.

A business known for integrity—treating suppliers, employees, and customers as the business would like to be treated if the positions were reversed—will usually win more interest and cooperation among such groups than rivals who are chiselers. Such a reputation for excellence—in merchandising, manufacturing, services, or other business activities—can manifest in better terms of trade at the outset of relationships and more flexibility to cope with periodic adversity.

True, it is not always easy to measure or even identify the particular advantage or the process through which intangibles take on economic value.   Corporate culture, a modern concept akin to vague old notions like team spirit, is trickier to define than venerable tools of business analysis, such as return on investment. Soft and capacious, culture results from multiple inputs, which may conflict with one another.  But I found, and elaborate through extensive illustrations in my book,  this pervasive phenomenon across all of Berkshire’s subsidiaries.

Business leaders--Bufett at the helm of Berkshire and the founders and leaders of its 50-plus autonomous subsidiaries--build cultures by promoting or exemplifying given values. Values help decision-making, motivate, attract people who share them, and repel those who don’t.  Values are also sticky—they are hard to change and tend to endure. The simpler the values are to convey the more durable they tend to be.

In the case of Berkshire and its subsidiaries, Buffett along with the founders and successive managers of those subsidiaries illustrate the process in action.  The creation of such a corporate culture is a feat of corporate governance, a scenario in which norms of behavior and expectations are more important than compliance manuals and organizational structures.

Berkshire people, entrusted with autonomy, say they feel more responsibile than they would if they are subjected to rigorous oversight and second-guessing. Despite its huge scale, Berkshire has not faced many serious scandals in its history.  Its corporate culture is one reason why and one reason to believe in its durability.

Larry, this is very interesting, and I might say not entirely surprising. Still, I am glad that you have been able to identify all of this and document it. There are many great lessons in here for corporate managers that would make their businesses better--even if not another Berkshire Hathaway.

Carrying forward the spirit of our Q & A from yesterday, I have a few questions. They relate to the replicability of what Buffett and his managers have done here. You may or may not have answers. First, do you have a sense as to how this consistent culture was built? You say: "The creation of such a corporate culture is a feat of corporate governance, a scenario in which norms of behavior and expectations are more important than compliance manuals and organizational structures." But I am looking for more detail. For example, what role does M&A strategy play? Must a business adopt an incremental approach--engaging in a series of acquisitions, carefully chosen and occurring over time? Does the creation of this culture require a particular type of leader (or group of leaders) at the helm of the mother ship--other than one who respects the autonomy of the managers of the various business units? Are particular governance structures at play here at all? For example, is it important that the different businesses are run through subsidiaries rather than divisions? And how does reporting work within the parent/subsidiary group?

I would appreciate any thoughts you have on these questions. I suppose I should wait for the book to come out to get some answers, yes? :>) Be assured that I will buy the book anyway!

Thanks for the kind words and good questions.

The first sentence in my book is “Berkshire Hathaway is an accident.” No one planned it and I don’t think anyone could plan to replicate it as such. What was pre-conceived, and what I explain in the final chapter is worthy of emulation, are the core values, including autonomy, permanence, earnestness and so on, and people embracing them.

The standard tool-kits of management models, organizational theory, and M&A strategy play at best a secondary role to the value-driven businesses at Berkshire. It’s not important at all whether the operating businesses are divisions or subsidiaries, as many of Berkshire’s subsidiaries, including the Marmon Group, are in turn organized along divisional lines.

What’s key are the values, not the structures. So long as the people understand and embrace these values, the book’s ultimate argument goes, the reporting and compliance protocols and business structures are secondary, and the organization’s success does not depend on any one person being at the helm.

And, you are right, the book will take readers on a journey through all fifty subsidiaries and all nine values—plus a lot more, including about how the values of Berkshire’s owners play into this—and it’s the kind of argument by example that requires a book rather than a post to sustain! And thanks for buying the book!