Easterly on The Tyranny of Experts

On Steve Bradford’s recommendation, I chose William Easterly’s (NYU) The Tyranny of Experts: Economists, Dictators, and the Forgotten Rights of the Poor (2014) as the book for my annual beach trip with the in-laws and cousins. (Last year was Daniel Kahneman's (Princeton) Thinking, Fast and Slow – and yes, my wife’s side of the family makes fun of my beach reading material).  Easterly is an author I have wanted to read for a while now, and I still need to read some of his earlier books. 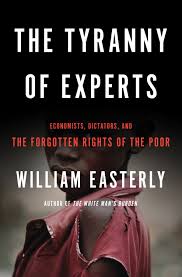 More after the break.

The Tyranny of Experts starts by grabbing the reader’s attention with a story of 20,000 farmers in Ohio being ripped from their homes at rifle-point in 2010. Barns and their grain harvest were burned.  An eight-year old child was trapped in the fire and died.  The land was taken by a British company for a project financed by the World Bank. I was outraged (but also suspected that the story was not true; if it were true, surely I would have heard about it).  Easterly later reveals that the story is true, but that it took place in Uganda, not Ohio.

Easterly uses this and many other stories (from New York to China to Columbia) to support his claim that the economic and political rights of the poor are important and are still being trampled.  These points seem relatively uncontroversial.  Easterly’s more radical point, and one that appears to have upset a number of people in the development world, is that leaders in development (from the World Bank to the Gates Foundation) have been harming the poor by working with and praising autocrats – and focusing on material needs of the poor more than the rights of the poor.

My co-blogger Marcia Narine has much more experience in this area than I do, but it seems like Easterly may have overstated the lack of focus on rights issues by those working in development.  As Owen Barder claims in this debate with Bill Easterly at the Center for Global Development, many working in development are focused on the economic and political rights of the poor, though I don't doubt that more effort is needed.

Easterly does not provide much in the way of solutions to the problems he cites.  Admittedly, Easterly criticizes technocrats who fly into developing countries touting simple solutions to complex problems, so he may not want to offer simple solutions of his own.  Easterly seems to want things to develop more organically.  In the last chapter, he does offer a small bit of guidance, saying that those who care about the poor should protest when they hear of human rights violations and that development leaders should not praise autocrats.

Easterly rightly focuses us on the need for more political and economic rights for the world’s poor, but he could have provided significantly more detail on proper, specific responses to the ongoing problems.

For contrasting views on development and aid, see the work of Jeffery Sachs (Columbia), including The End of Poverty, which I read a few years ago.  Sachs and Easterly are often on opposite sides of the development debates.  See a bit about their disagreements here and here.