Yesterday, the Executive Director, James Leipold, of NALP (the National Association of Law Placement) presented data regarding law graduate hiring trends from 2000 through 2012, both nationally and for my school (Georgia State University College of Law).  It provided an understanding of the changes to the legal market as a whole, and for our graduates specifically.  I wasn’t aware of the data compiled by NALP and available on their website prior to this presentation, and man was I impressed.  As a faculty member who frequently counsels students on job searches, the data paints a very interesting story about HOW a majority of law graduates find jobs and WHERE they find them.  The data also tells a very compelling story of how the 2008 financial crisis/Great Recession has impacted the legal hiring market.  (In short:  big law jobs are down significantly which was created downward pressure on alternative career paths as students who would have traditionally pursued big law jobs compete for other positions.)

On the HOW question, the data confirmed a suspicion of mine about how a majority of students find jobs.  Of course these statements will be either more or less true depending on the reputational capital of your school.  Before the Great Recession approximately 20% of students found their post-graduation job through on campus interviewing (OCI) and that number is now approximately 14%.  This means that even before the Great Recession, but certainly today, a vast majority of students find jobs through other means such as networking/personal referral, self-initiation such as inquiring about job opportunities and sending out resumes, and responding to postings on sites like Monster.com.   In thinking about HOW law students find jobs, this information provides a powerful narrative that students who are working hard to find a job are not alone, and not the outlier now, or even in the past.  This information will shape the advice that I give students about where and how to place their energy during their three years in law school.  If in-school activities do not land a student on law review and the top 10% of their class, then focusing on external opportunities to network and gain professional contacts in law practice and law-related fields should be a top priority for students. 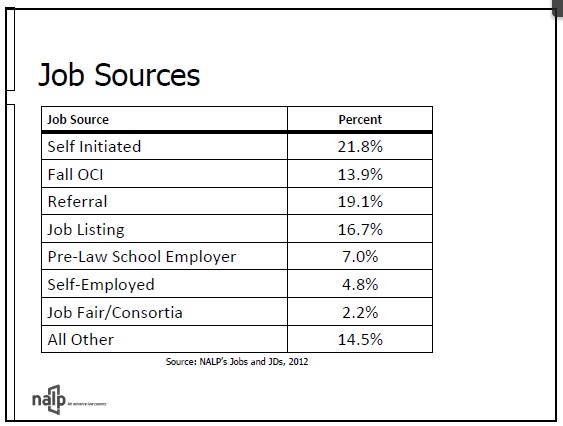 And now for the WHERE part, private practice job placement is down from a steady 55% to approximately 50% of post-graduation jobs.  One of the sectors that has absorbed this shift is JD hiring by businesses, which is up to almost 18% of new graduate jobs (from historic percentages of 12-13%).   The NALP report on 2012 graduates 9 months after graduation concludes that:

Out of a presentation that included a host of facts and figures, I want to highlight one other part of the picture painted by the data.  Feedback from legal employers (mostly private practice law firms) said that in new-JD hires, they were looking for students who understand that practicing law in a firm is a business and how they fit into that business model. They also want students to have a basic understanding of financial literacy skills.   I plan on sharing this information with our students who are turning their attention to scheduling classes for their spring semester. I see this as a clear justification for emphasis on business-related classes.