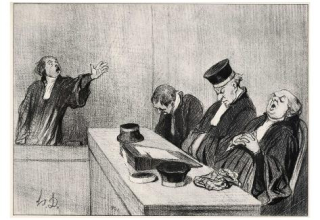 A few months ago I found myself drafting a motion for rehearing in an appeal that I had thought would be a fairly easy win for my client. It involved the interpretation of an easement, and there were three strong reasons why the trial court's rulings should have been reversed. The court had denied the requests for oral argument and a new justice issued an opinion that went in a direction neither party really argued.

As I was drafting the motion for rehearing, I asked myself (as I always do when drafting such a motion) where things had gone wrong. The court's opinion was based on what I considered to be dangerously flawed presumptions about provisions that were fairly standard, and that would cause significant problems in the industry if they were interpreted in this new way. If only the court had granted oral argument, and they had telegraphed their understanding, I could have addressed the issue then.

Unfortunately, while oral argument on appeal is considered to be very important to advocates, it is increasingly disfavored by courts. The courts have grown weary of poor presentations that waste a considerable amount of time, and ultimately provide little value. As such, oral arguments are being denied in many courts and cases submitted entirely on the briefs.

The problem with this is that, when done well, oral argument can explore and test arguments in ways that are difficult to test by the briefing alone. We need to convince the courts that it is worth their time again.

This second edition of Point Well Made: Persuasive Oral Advocacy, a practice guide for new and old advocates alike, could go far in helping courts see the value of oral argument again. New lawyers can pick up the book and find simple checklists and guidelines that will help them learn how to properly craft and present their arguments. Seasoned attorneys will find reminders and new tips on remote argument that will keep them updated and current on both thinking and style. And if the practitioners follow this advice, the courts may find oral argument helpful again.

Point Well Made begins with a short primer on rhetoric and them moves straight into audience analysis. New practitioners in particular will find value in acquainting themselves with the mindset and concerns of their judges and justices. Old practitioners may need the reminder that our justices have needs that should be met as the focus of the argument, not just a side-effect.

The authors also provide guidance on verbal and non-verbal communication skills to employ and refine in presenting the argument. They start with the six most common body language errors, then proceed to provide practical advice on how to overcome those errors and avoid others. Thankfully, they recognize that "one size does not fit all" when it comes to body language, and recommend instead variations of stances and techniques that each speaker can try out themselves to develop their own style.

The authors end this second edition with a detailed discussion of the "new normal" of remote argument. I wish I had been given this guidance at the beginning of my time in quarantine. During quarantine (and since) I argued motions via Zoom, participated in a Zoom trial, and have had oral arguments via Zoom. As a result, I learned many of the lessons presented in the book regarding camera placement, lighting, and so on by trial and error. But even with that experience, I found many of the remote argument tips to be helpful and plan on employing them in my next remote argument, particularly with regard to vocal inflection and ramping up intensity, since we tend to appear more "flat" on remote viewing.

Finally, the authors have included appendices with useful checklists for each topical chapter, as well as short exercises to implement the concepts. Practitioners and students alike will find these short exercises to be helpful in driving home the points taught.

As an appellate specialist who also coaches moot court, I wince a bit each time a justice sitting as a volunteer on a moot court panel comments on how much better prepared and practiced the students are than the majority of the "real" lawyers who appear before them in court. If more practitioners read and applied the lessons in Point Well Made, perhaps I would hear that criticism less often, and perhaps the courts would be willing to hear more oral arguments again.