The following post is a guest post by Joe Fore based on his recent article in the Fall 2019 issue of Legal Rhetoric & Communication, the Journal of the Association of Legal Writing Directors.

Consider the following: a client asks a lawyer to assess the client’s chances of winning in a lawsuit. After doing some research, the lawyer concludes that the client has a strong case. If she had to wager, she’d say the client has about a 2/3 probability of prevailing. The next day, the client calls and asks, “So, what are our chances?” What should the lawyer say to convey that likelihood assessment?

If she follows typical practice and traditional legal writing guidance, she’ll say something along the lines of, “You’ll likely win” and then explain her reasoning. She may think that she’s accurately conveyed her professional judgment. But how will the client interpret their chances of success?

While commonly used in legal writing, qualitative “verbal probabilities”—words like “probably,” “likely,” or “almost certain”—have an inherent drawback: their meaning can vary widely based on who’s using them and on when, where, and how they’re used. This, of course, creates the possibility that a client might interpret a verbal probability very differently than the lawyer intended. As a result, the client could over- or underestimate their chances of success when deciding on a course of action—perhaps leading the client to settle when they should fight or vice versa.

The idea that differing interpretations of verbal probabilities could lead to bad outcomes isn’t theoretical: it’s believed that confusion over such phrases contributed to both the failed Bay of Pigs invasion and the Space Shuttle Challenger disaster. And miscommunication between lawyers and clients also raises potential ethical issues. After all, ABA Model Rule of Professional Conduct 1.4(b) states that lawyers have an ethical duty to explain matters “to the extent reasonably necessary to permit the client to make informed decisions regarding the representation.” Can a client’s decision truly be “informed” if a lawyer communicates advice in ways that have a high likelihood of being interpreted differently than the lawyer intended?

Of course, if our lawyer wanted to reduce ambiguity around her prediction, she could just follow her initial hunch and say, “I’d say your chances of winning are around 2 out of 3.” But this could be a tough sell, as lawyers have historically avoided quantifying their opinions. And even if you could convince lawyers to do so, numerical probabilities present their own problems. Many people—even highly educated ones—struggle to intuit numerical probabilities. Plus, because “66 percent” sounds more precise than “probably,” slapping a number on a legal opinion could give the client a false impression that the prediction has a more solid basis than it really does or that the lawyer is more confident in the estimate than they really are.

Even some legal specialties have done it. The best example is tax, which has a widely understood hierarchy of language used to counsel clients about the chances that a given tax position will meet IRS scrutiny. The probability phrases used by tax lawyers—which have grown out of regulatory mandates and customary practice—have consistent meanings throughout the field. (The figure below shows estimates from practitioners, scholars, and the American Institute of Certified Public Accountants about the meanings of probability phrases in the tax context. Note the high degree of consensus.)

But outside of a few specific legal niches, there’s no real consensus on the meanings of probability words most commonly used in legal writing and analysis. So most lawyers are stuck with using vague verbal probabilities without a clear conception of what they mean or how they’ll be interpreted by others.

I think lawyers can do better; they can be more deliberate in thinking about how to communicate uncertainty to clients. And the legal academy can help. Other professional fields have devoted thought and study to the ways they communicate their predictions. Legal scholars and practitioners have similar opportunities to study the ways that lawyers and clients use and interpret verbal probabilities—and, more broadly, the ways in which lawyers communicate their analysis, as a whole. Further work might also explore why lawyers resist quantifying their results and examine whether they should rethink that.

These topics fit nicely with larger conversations about improving communication between lawyers and clients. For decades, the plain language movement has sought to make legal language easier to parse. And legal-design thinkers are also re-examining traditional, text-based ways that lawyers present legal analysis. For example, in September 2019 the Michigan Bar Journal highlighted an award-winning Australian client-advice template that attempts to present information more clearly than the traditional opinion letter.

These are helpful developments. Still, while this example’s visual format may aid comprehension, the use of ambiguous phrases like “Low to Medium” to present likelihoods still presents a chance for miscommunication. This is where it would be helpful to have empirical work that examines how lawyers and clients understand probability phrases in various legal contexts.

But until that work can be done, I’ve surveyed empirical and practical work from many different fields, and I suggest that the following scale reflects the best attempt at a standardized probability lexicon for conveying opinions in legal writing: 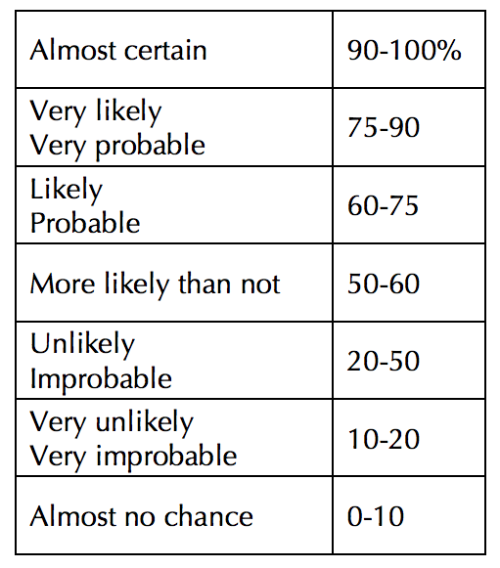 How do I sync my settings in windows 10,now first update your window 10,then get the best new feature and functions.