Carlyle Shepperson was a Vermont attorney who was charged with violating DR 6-101(A)(1) and 6-101(A)(2), which were forerunners to Rule 1.1. In re Shepperson, 674 A.2d 1273, 1273 (Vt. 1996). A justice of the Vermont Supreme Court had referred Shepperson to the state disciplinary board over the quality of his work product. Id. Shepperson entered into a remedial stipulation and agreed that he would not practice law until he completed a legal writing tutorial to “develop skills in legal analysis, persuasive writing techniques, writing organization, [ ] use of legal authority, proper citation form, and proper formatting for memoranda and briefs.” Id. at 1273-74. Shepperson later told bar counsel that he would not complete the tutorial and that he had left the United States for an indefinite time. Id.

Bar counsel filed a petition of misconduct and Shepperson filed a response but didn’t appear at the disciplinary hearing. Id. The Board of Professional Conduct recommended that Shepperson be disbarred. Id. The board found that Shepperson’s briefs:

were generally incomprehensible, made arguments without explaining the claimed legal errors, presented no substantiated legal structure to the arguments, and devoted large portions of the narrative to irrelevant philosophical rhetoric. The briefs contained numerous citation errors that made identification of the cases difficult, cited cases for irrelevant or incomprehensible reasons, made legal arguments without citation to authority, and inaccurately represented the law contained in the cited cases.

The board found Shepperson’s briefs were not competently prepared and didn’t meet minimal standards of competence; that Shepperson didn’t adequately prepare his work or give his work appropriate attention; and that he didn’t properly protect his clients’ interests. Id.

The Supreme Court of Vermont agreed with the board’s findings but issued an indefinite suspension. Id. In doing so, the court noted that Shepperson’s brief in the disciplinary matter showed his deficiencies. Shepperson failed to raise a legitimate legal issue and he didn’t cite a single authority to support his arguments. Id. at 636. Instead, his brief was a “harangue against the legal system” claiming “that the Board and this Court have violated his freedoms of speech and religion and limited his ability to think in diverse ways by dictating what is and what is not a proper legal argument.” Id. The court found that while Shepperson was free to represent himself as he pleased, he could not be allowed to continue to represent clients in a way that failed to safeguard the clients’ interests. The court declined to disbar Shepperson but did suspend him indefinitely.

Appellate counsel also has a duty of candor toward the tribunal. Model Rule 3.3 says:

(2) fail to disclose to the tribunal legal authority in the controlling jurisdiction known to the lawyer to be directly adverse to the position of the client and not disclosed by opposing counsel[.]

Gonzalez-Servin involved consolidated appeals from orders transferring cases to courts in Mexico and Israel under the doctrine of forum non conveniens. One case arose from accidents allegedly caused by defects in Bridgestone/Firestone tires installed on Ford vehicles in Latin America. Id. at 933. The other claims concerned contaminated blood products. Id. The Seventh Circuit began its opinion by noting that it had consolidated the cases because each raised “concerns about appellate advocacy.” Id.

In the tire-defect case, the Seventh Circuit found that appellants’ counsel failed to cite adverse Seventh Circuit precedent in either their opening brief or their reply brief, even though the appellees cited the controlling decision in their response brief. Id. The court took the appellants’ failure to cite, “let alone try to distinguish” the adverse case as “an implicit concession that the circumstances of that case [were] ‘nearly identical’ to those of the [tire-defect] case.” Id.

In the blood-products case, the appellants filed their opening brief and then the Seventh Circuit issued two decisions that were adverse to the appellants’ position. Id. at 934. Although the appellees’ brief relied heavily on the newly issued adverse authorities, the appellants’ reply brief discussed one of the adverse cases “a little” and the other “not at all.” Id.

When there is apparently dispositive precedent, an appellant may urge its overruling or distinguishing or reserve a challenge to it for a petition for certiorari but may not simply ignore it. We don't know the thinking that led the appellants' counsel in these two cases to do that. But we do know that the two sets of cases out of which the appeals arise, involving the blood-products and Bridgestone/Firestone tire litigations, generated many transfers under the doctrine of forum non conveniens, three of which we affirmed in the two ignored precedents. There are likely to be additional such appeals; maybe appellants think that if they ignore our precedents their appeals will not be assigned to the same panel as decided the cases that established the precedents. Whatever the reason, such advocacy is unacceptable.

Id. The court then said that “the ‘ostrich-like tactic of pretending that potentially dispositive adverse authority against a litigant does not exist is as unprofessional as it is pointless’” id. (quoting Mannheim Video, Inc. v. County of Cook, 884 F.2d 1043, 1047 (7th Cir.1989)) and illustrated its point by including these photos in its opinion: 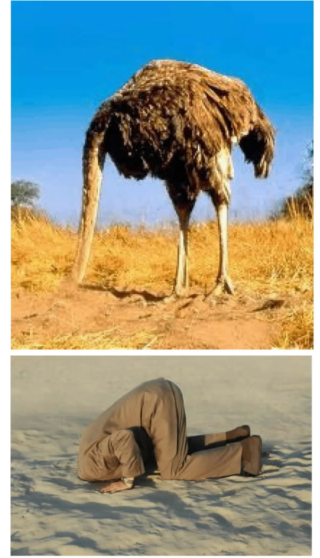 Finally, appellate counsel must be mindful of Model Rule 8.2(a):

A lawyer shall not make a statement that the lawyer knows to be false or with reckless disregard as to its truth or falsity concerning the qualifications or integrity of a judge, adjudicatory officer or public legal officer . . . .

Swinka arose out of a claim that state officials had violated the Fifth and Fourteenth Amendments in a tax sale. Id. at 147. On appeal, Swinka’s brief included statements accusing the trial court of contradicting itself; intentionally overlooking genuine issues of fact; creating false analysis; lacking understanding of Pennsylvania tax law; misstating the status of the law; padding its opinion with citations to irrelevant cases; trying to deprive the appellant of its rights; and other types of inappropriate conduct. Id. at fn.2.

The Third Circuit emphasized that appellants’ counsel had an ethical duty to avoid making false or reckless statements about the qualifications or integrity of a judge. Id. at fn.3. The court affirmed the trial court’s decision and said:

Swinka’s brief repeatedly casts aspersions on the District Court’s analytical ability. The aspersions lack substance and utterly fail to advance Swinka’s legal arguments. As such, these unprofessional comments reflect poorly on Swinka’s counsel. When counsel wastes ink attacking the ability of able District Courts instead of advancing his or her client’s legal arguments, we smell more than a hint of desperation and confusion about how an appeal works. It is an unbecoming way to brief an appeal.

Swinka’s counsel was referred to his state’s disciplinary board and he received a public reprimand for violating Rule 8.2(a). http://www.pacourts.us/assets/opinions/DisciplinaryBoard/out/186DB2018-Vinsko.pdf?cb=1.

We must be aware of the Rules of Professional Conduct when we represent clients on appeal. We must be sure that we provide competent, zealous, representation in a way that respects the integrity of the courts and our profession.

* The appellate attorney's efforts to raise the alleged conflict, and the overseeing trial judge's rather negative reaction:https://www.ajc.com/news/local/lawyer-aps-cheating-appeal-wants-out-judge-scolds-him-says/sVHkiSotPu71Zm82xBNtdJ/

* The intermediate appellate court's decision not to review: https://www.ajc.com/news/local-education/appeals-court-won-review-attorney-conflict-issue-aps-cheating-case/ViXUcdlIwr4PcucgYG55WL/#

I haven't read the primary documents in this case, but the news articles above provide a good basic overview of the situation.

Thanks again for the post!
Jennifer Romig
Emory University School of Law