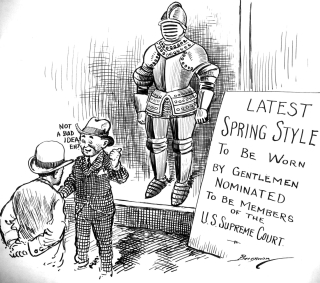 Amicus briefs are wonderful tools, and fun to draft. Freed from many of the rule restrictions imposed on a regular party brief, an amicus writer can soar rhetorically over the fray and make "big picture" observations of considerable help to the court. They can be full of satire. They can tell true stories. They can even be cartoons.

That freedom, however, can be abused. And when it is, the friend of the court can become an enemy. To be a friend to the court, keep these three rules in mind.

1. Amicus briefs should add something new and valuable to the case.

First, amicus briefs are not an opportunity to ghost-write around briefing limitations. As counsel for a party to an appeal, I have been asked to not only solicit amicus briefs, but to ghost write them for friends of the court who will then put their name on them. Resist that urge.

“A true amicus curiae is without interest in the litigation matter. An amicus curiae is a ‘bystander’ whose mission is to aid the court, to act only for the personal benefit of the court.” See Burger v. Burger, 156 Tex. 584, 298 S.W.2d 119, 120 (1957). In some courts, the amicus must certify that they are not being paid or supported by a party, or disclose all sources of funding for the brief. Thus, Federal Rule of Appellate Procedure 29 requires disclosure of all sources of funding and any input on the writing process by a party's counsel. Supreme Court Rule 37 is similar. Some states have much looser rules, while others mirror the federal system. But everyone should be mindful of Judge Posner's position that most parties use amicus to simply add to their page length, and as such, most amicus briefs should be ignored because they do not offer anything of value to the court that is not already in the party's briefs. See Voices for Choices v. Ill. Bell Tel. Co., 339 F.3d 542, 544 (7th Cir. 2003).

A true amicus recognizes this rule and presents something new and valuable to the court. The parties recognize this and solicit briefs that will add value to the argument without ghost writing them. Ignoring the rule likely means your amicus will likewise be ignored, or even rejected.

2. Amicus briefs should not be used for personal attacks.

Second, amicus briefs should not be used for personal attacks on either the litigants or the court. Recently, members of the U.S. Senate filed an amicus brief in a Supreme Court case involving the Second Amendment. Authored by a member of the Senate as "Counsel of Record," the brief repeatedly and selectively quotes Justice Roberts, cites to public polls and numerous websites more than cases, hints at a dark money conspiracy between the NRA, the Federalist Society, and the Court, and concludes with a thinly-veiled threat:

Today, fifty-five percent of Americans believe the Supreme Court is “mainly motivated by politics”(up five percent from last year); fifty-nine percent believe the Court is “too influenced by politics”; and a majority now believes the “Supreme Court should be restructured in order to reduce the influence of politics.” Quinnipiac Poll, supra note 2.To have the public believe that the Court’s pattern of outcomes is the stuff of chance (or “the requirements of the law,” Obergefell, 135 S. Ct. at 2612 (Roberts, C.J., dissenting)) is to treat the “intelligent man on the street,” Gill v. Whitford, No. 16-1161, Oral Arg. Tr. at 37:18-38:11 (Oct. 3, 2017), as a fool.

The Supreme Court is not well. And the people know it. Perhaps the Court can heal itself before the public demands it be “restructured in order to reduce the influence of politics.”Particularly on the urgent issue of gun control, a nation desperately needs it to heal.

While the brief garnered plenty of attention and, thus, likely accomplished exactly what it set out to do, it was harmful in a way few people noted. Judges certainly are not above criticism. But the judiciary is put in a difficult position when it is criticized in its own forum. If it censors the criticism, it loses status. It also has limitations on its ability to respond. Therefore, as Learned Hand opined, "Let [judges] be severely brought to book, when they go wrong, but by those who will take the trouble to understand."

Attorneys (and the authoring Senator was an attorney) in particular should be cautious in their critiques of the courts and counsel, because they have an obligation to uphold the legal system. This may, at times, require "speaking truth to power," and many commentators think this is exactly what the amicus did. But it should not be done in a way that diminishes that power of the courts overall, or that recklessly impugns the integrity of our highest court. See Model Rule of Professional Conduct 8.2. And the brief here, weaponized as it was to pointedly attack the court at the top of our legal system, arguably did just that.

Most of us, of course, are not U.S. Senators with a political point to make. If we want to write briefs that will be read and be persuasive, we need to attack the arguments, not the advocates or the members of the court.

3. Amicus briefs should not inject extrajudicial facts or junk science.

Finally, amicus briefs should not try to bring in facts not in the record, and in particular, should not introduce research that is not carefully vetted to ensure its accuracy. Amicus briefs that rely on social research data are popular, and are particularly susceptible to being weaponized when they distort that data. See Michael Rustad & Thomas Koenig,The Supreme Court and Junk Social Science: Selective Distortion in Amicus Briefs, 72 N.C. L. Rev. 91(1993). As the authors of this paper note, amicus briefs purporting to present statistical fact to the court create fiction, instead, when they fail to follow the proper methodologies or permit analytical gaps that would have been contested and weeded-out if presented at trial. Without a formal process for determining the merit of such statistical analysis when it is presented on appeal, an amicus who files such a brief must be extremely cautious that they do so appropriately.

Amicus briefs that avoid these three traps can truly be helpful to the Court. They can be extremely inventive. But they should stay friendly to the court, if not the court's rulings.