Guest Post: Cut The New Kid Some Slack (Even If That New Kid Is You)

This is a guest post by Mary Anodide, a second-year student at Widener University Commonwealth Law School. You can contact Mary at mcanodide@widener.edu.

Since the start of my first year of law school, I have taken nine exams, written two in-depth, extensively researched papers, and read more cases than I can count. None of those things, which would end up determining my overall GPA and class rank, made me more nervous than the pass/fail oral argument that wrapped up my Legal Methods II class. 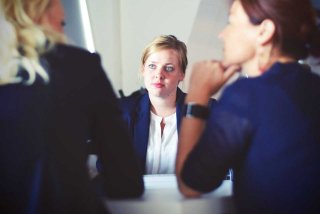 I do not remember much about what I said during those eight, grueling minutes of spotlight. What I do remember is walking in and seeing the “judges” sitting up on the bench looking very serious, robes and all. I remember my legs shaking behind the podium so vigorously that I thought I was going to fall right out of my heels. I remember talking so fast that I kept forgetting to take a breath. I remember being asked a question that I was not ready for and thinking that I was going to have to concede my whole argument. While the argument was not graded, it was based on the appellate brief I had written for that semester, which would determine my grade for the class. A lot of my nervousness about oral argument stemmed from worrying that I was going to be told that my entire argument was incorrect.

After my peers and I were done presenting our arguments, my professor and the other judges on the panel gave us constructive feedback. I was anticipating the worst, of course. Unexpectedly, all of the feedback I received was positive. No one mentioned any of the things that had made me feel insecure. To top it off, I received recognition from my professor for having one of the best oral arguments in my class. I am very proud of myself for earning that recognition, because looking back, I am still not quite sure what I did to deserve it. I think everyone in my argument group did just as well as I did.

Getting up in front of others, whether it be your professor, another attorney at your firm, or a judge, who will critique the merits of your argument, is an extremely nerve-wracking experience. Next time you encounter an inexperienced attorney who appears to be struggling with nerves or confidence, try to remember a time when you were in the same situation and felt the same way. Try to put yourself in her shoes. Remember what it felt like when you were not as knowledgeable about this profession as you are now. Try to offer them some simple words of encouragement because, if I have learned anything from my first argument, it is that something as small as “great job” can go a long way.

I use the award I received for my first oral argument as a reminder that even when I do not think I am doing well, so long as I adequately prepared and try my hardest, I am likely doing better than I think I am. If you are a law student or new lawyer, remember that you are probably being harder on yourself than anyone else will be.

Before my oral argument, with all the nerves and dread that the anticipation of it brought upon me, I was sure that I was going to hate it. Afterward, I immediately called my dad to tell him that I wanted to join the moot court team. Going forward, I will try to keep an open mind when given a new and intimidating task. I might like it. I might even be great at it. And maybe my legs won’t shake so much next time.