The U.S. Supreme Court and Its Political History. 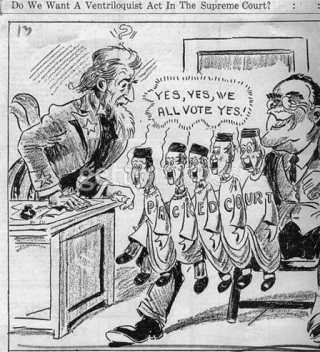 Over the last several weeks there have been numerous articles about the "unprecedented" politicization of the United States Supreme Court. I have also seen several opinion pieces about growing frustration with the political leanings of the judiciary, and proposals to increase the number of seats on the high court to bypass a feared conservative bloc.

I am fortunate enough to be married to a lovely lady who is, among many other things, a college history professor. While we don't talk shop too often, I am familiar enough with our history to know that none of these complaints are new. Indeed, they say that those who do not know history are doomed to repeat it. So let's learn a bit of history, then, and gain a bit of insight from the past.

First, dissatisfaction with the judiciary is baked into the system. Alexis de Toqueville noted that “[t]here is almost no political question in the United States that is not resolved sooner or later into a judicial question.” Yet Tocqueville considered this a good thing: lawyers by their education and nature were naturally skeptical of change and conservative in nature, and thus provided our best brake against the “revolutionary spirit and unreflective passions of democracy.” Congress and the Executive provide the passion and funding and guidance that moves the State, and the judiciary makes sure that all this passion and money doesn't ruin anything of Constitutional importance.

This inherent conflict between the Supreme Court and the other branches of government has often resulted in moves to make the Supreme Court "more like us." The Constitution does not define the number of seats on the Supreme Court. Thus, the Supreme Court started with just six seats in 1789. It did not take long for this to invite political intervention. In 1801, President Adams and his outgoing Federalist congress passed a bill to restrict the court to five seats, attempting to limit the incoming President Jefferson from meddling with things. Jefferson and his new congress changed the seats back to six by repealing the act.

After the Civil War, the seats were reduced, at first back to seven, and then to nine, by President Grant and his congress. This number has remained the norm until this day.

That doesn't mean things have gone smoothly. In fact, things were worse in the 1930's than they are now, and we almost wound up with 15 judges a result.

In the 1930's, FDR and his congress passed a number of new laws that were a part of what became known as the New Deal. The Supreme Court was the only thing stopping this change. Time and again, the Court balked at the fairly radical changes that were being implemented. Soon, ideological divisions were noted and mocked. There were four conservatives -- Justices Pierce Butler, James Clark McReynolds, George Sutherland, and Willis Van Devanter -- that the pro-New Deal press began calling "the Four Horsemen." They were opposed by the "Three Musketeers," who favored the changes: Justices Louis Brandeis, Benjamin Cardozo, and Harlan Stone. In the middle were two moderates, Justices Charles Evans Hughes and Justice Owen J. Roberts, with Roberts usually siding with the "Four Horsemen" to overturn New Deal legislation.

The "Four Horsemen" were publicly reviled. Burned in effigy in city squares, they nevertheless stuck to their opposition, often meeting together to formulate opinions and questions at oral argument. In the 1935 term alone, this voting bloc overturned the Agricultural Adjustment Act of 1933, the Federal Farm Bankruptcy Act, the Railroad Act, the Coal Mining Act, the National Industrial Recovery Act, and a New York minimum wage law.

In 1936, FDR won reelection by a landslide and believed that this mandate gave him a chance to defeat the Four Horsemen. He announced legislation that would add (through a thinly-veiled mandatory retirement plan that required retirement at 70 or appointment of an additional judge if retirement was refused) as many as six new justices to the court, turning the conservative voting bloc into a minority. In one stroke, the president proposed to regain "control" of the court.

There was immediate backlash. The public and press were split, but most (along with many in Congress) considered the move to be an improper, and undemocratic, power grab.

Most historians seem to think that the proposal never would have passed. But events on the high court soon made the effort moot. Shortly after its announcement, in a move that the press called "the switch in time that saved the nine," Roberts sided with the Three Musketeers in a minimum wage case, and what support there was for the court-packing bill subsided. Within a year, Van Devanter and Sutherland retired and were replaced by Justices Hugo Black and Stanley Reed, both FDR appointees who proved to be strongly in support of his New Deal.

Modern opinion writers would do well to remember our past. What we are seeing is not a new politicization, but the continuation of a trend that is inherent in our system of checks and balances, and a history of attempted political tinkering that repeats itself with some frequency. There may very well be better ways of constructing the Court, and revisiting the court's role and composition periodically is a healthy thing. But overstating the current state of events, underestimating public esteem for the high court and its fragile but important position, and refusing to acknowledge history, does not help that cause.