When Having A Heart for Justice is Not Enough

The following is a guest post by Prof. Teri McMurtry-Chubb, Professor of Law at Mercer University School of Law.

On Friday, February 17, 1978 the Chelsea Chapter of the N.Y. Committee to Overturn the Bakke Decision (NYCOBD) met to strategize how best to influence the Supreme Court decision in Regents of the University of California v. Bakke. The purpose of the meeting was to strategize under the banner of the National Committee to Overturn the Bakke Decision (NCOBD) as it planned a unified “March on Washington” in protest. In keeping with the call to arms espoused by its sister chapters throughout the United States, Chelsea NYCOBD boldly stated in its meeting flier:

In the spring, the U.S. Supreme Court will render a decision on the Bakke case – one of the most important cases in the last 25 years on the question of racial equality. The Bakke decision, which is based on the absurd and racist idea of “reverse discrimination,” is a serious attack on the rights of minorities to jobs and education. If the Bakke decision is not overturned by the court, affirmative action programs for minorities and women will be threatened with elimination. Join the growing anti-Bakke movement in our demands to: implement, maintain, and expand special admissions and other essential affirmative action programs for minorities and women at all levels of higher education and employment. Fight Racism. Overturn the Bakke Decision! 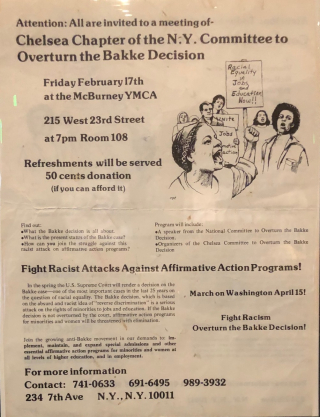 Although the NCOBD was not successful in overturning the decision, its act of grassroots organizing and educating the public is a primer on the importance of education to informed direct action. 41 years later, our contested, national conversation about affirmative action has continued with the Harvard Affirmative Action Case and the College Cheating Scandal. The scandal has caused us to (again) pause and ponder what is an elite education, who “earns” admission to America’s most prestigious educational institutions, and who deserves access to the America Dream. However, what about the lawyers who litigate these cases? Have you ever considered the views they hold about affirmative action in admissions and how their beliefs shape their discussions about the litigants and the arguments in their briefs that will ultimately become part of the jurisprudential landscape of affirmative action law?

This question, the question of how bias shapes lawyer analytical and reasoning processes, is the subject of a 6-year empirical research study I conducted involving student motion and appellate briefs generated from case files involving social justice issues. The study examines 576 brief submissions from 192 students on topics ranging from hostile work environment claims based on colorism, religion, and national origin to LGBTQIA students’ right to freedom of expressive association in creating the policies for their student organizations.  I wanted to know if law student biases concerning race, gender, class, and sexuality colored their analytical and reasoning processes as they drafted the argument sections of their briefs, and if so to what extent. The focus of one of the case files (the universe in which students litigate) was an African American man ranked in the 75th percentile of all law school applicants who was denied admission to law school, even when White legacy students were admitted despite being consistently ranked in the lower 25th percentile of all applicants. The claimant sued the University on grounds that the law school’s legacy admissions policy was an unconstitutional affirmative action program - he argued that a White student “took his seat” in the 1L class. The Bakke case and its progeny were the controlling authority.

Student attitudes about colorblindness led approximately 85% of them to make legal arguments flawed by bias in the first drafts of their briefs. For example, students representing the claimant analyzed his racial classification, “African American,” when the race of the legacy admits, “White,” was the racial classification at issue in the lawsuit. Student arguments advanced the notion of color-blindness or the phenomenon of “not seeing color.” Moreover, students representing the University argued for diversity as a compelling state interest even though the legacy admissions policy favored White applicants over applicants of color - a losing proposition for the University. Simply, they could only see race or ethnicity as anything other than White. These arguments based on biased assumptions led students to make arguments that were incorrect and inconsistent with the major tenets of the Bakke decision, and ultimately contrary to their client’s interests.

The good news is that with critical pedagogical interventions, teaching methods aimed at problematizing students’ biased assumptions, students course corrected their attitudes from color-blind to color-conscious. Approximately 82% of all student final appellate brief submissions, the final assignment submitted by students in the study, evidenced a critical engagement with issues of race and class in higher education admissions policies. Students made arguments that recognized “White” as a racial category of analysis in affirmative action jurisprudence, “legacy” as a function of class hierarchy, and the connection between the two. Most importantly, students continued to engage with each other and their peers around these issues after their time in the study ended.

Law firms, public interest and government agencies should note that unless their attorneys have been taught to recognize and disrupt their biases with respect to race, class, gender, and sexuality, it is probable that they will replicate these biases as they interpret the law and develop the analytical frameworks in their briefs. A heart for justice does not necessarily mean that lawyers will do justice. Rather, it is imperative that legal educators and the bar actively implement interventions to make attorneys aware of how their arguments replicate structural and societal inequities. We can do no less if our expectation is that attorneys serve their clients with excellence and an eye toward equity. You can read a detailed analysis of the study in my article The Practical Implications of Unexamined Assumptions: Disrupting Flawed Legal Arguments to Advance the Cause of Justice, 58 Washburn Law Journal  ____ (forthcoming 2019).

Nice write up. your posts are always apt, concise and educating.