The Dangers of "Us Versus Them" Thinking 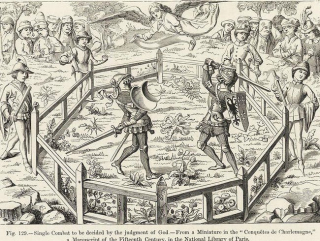 Social media is an interesting experiment. Because of my diverse legal background, I am friends with people who identify with viewpoints from every shade of the political and social spectrum, and I usually enjoy hearing these different perspectives on issues and try to learn from them. But as time passes, I see fewer shades and more rigid, black-and-white positions. There is less thoughtful sharing and more knee-jerk accusation.

This way of thinking in terms of "us" versus "them" is by no means new, but it does seem to be increasingly fortified in our public and private discussions from everything to politics to how we view history. Just try to take a thoughtful, nuanced position on anything from immigration to Civil War monuments (or anything relating to Donald Trump), and you'll quickly see my point.

Perhaps no other profession is as deeply grounded in this adversarial perspective as the law. The idea is reinforced in every filing and letter through the use of a simple "v." Indeed, our modern system has roots in an older system that permitted litigants to hire champions who would bludgeon each other to death or submission to prove their case. Russel, M.J., Trial by Battle Procedure in Writs of Right and Criminal Appeals, 51 Law and History Review 123–134 (1983).

When I serve as counsel, I do so aggressively and make every proper effort to prevail over the party who is "versus" my client. But we have become more civilized over the years in how that process works. Today, lawyers who demonize the other party, or who buy into the "hired gun" mentality and choose to vilify their counsel, are serving neither their clients, themselves, the legal system, or their society.

I serve as, and alongside, trial counsel in small and in multi-million dollar cases as both defense and plaintiff's trial counsel and as appellate counsel. In doing so, I often see the harm that arises from the refusal to see the other side's perspective. We must be zealous advocates as attorneys, but to be effective means we must have a willingness to see the "us" in the other side.

Last week I wrote about the costs of contentious litigation in terms of economic loss and gain, and its impact on credibility. But demonizing our opponents also puts on blinders. What if the claimants aren't just money hungry but are actually injured or their business has been genuinely impacted? What if the defendants really did not intend any of the harm they caused, but did their best to avoid it? What if someone or something else was to blame? What if the failure to disclose or produce important documents by opposing counsel really was a mistake?

Turning opposing counsel or parties into villains means we might not ask these questions, because we assume the answer. If we don't assume the worst, if we are willing to put ourselves in the other side's shoes, if we can see "them" as "us," then we can see more adequately the dangers in our own case and the merits in the other side's position. As a result, we can more appropriately plead and argue our cases, we can more accurately evaluate and forecast outcomes, and we can more readily reach long-term solutions for our clients rather than simply trying to "win" each individual point of contention.

I would also note that, as attorneys, it is particularly important for us to remember that our personal opinions about opposing counsel or their client must be kept to ourselves. We often forget about it, but Rule 3.4(e) of the Model Rules of Professional Conduct states that a lawyer shall not:

in trial, allude to any matter that the lawyer does not reasonably believe is relevant or that will not be supported by admissible evidence, assert personal knowledge of facts in issue except when testifying as a witness, or state a personal opinion as to the justness of a cause, the credibility of a witness, the culpability of a civil litigant or the guilt or innocence of an accused[.]

Aside from raising disciplinary issues, violating this rule can harm our clients. In one Florida car wreck case, trial counsel argued that that the defense did not want the jury to be fair and reasonable, but had instead brought a "bogus counterclaim to make it look like they have something to argue about," and that, in contrast to the defense witnesses, his client was not going to lie. Airport Rent-A-Center Car, Inc. v. Lewis, 701 So. 2nd 893, 896 (Fla. Dist. Ct. App. 1987). On appeal, the court concluded that the defendant was denied a fair trial and reversed the award.

Of course, that means that this tactic worked at trial. Sometimes, you can bludgeon your opponent into submission by demonizing them. At least temporarily. But the costs continue to accumulate personally, professionally, and systemically. And that system is increasingly aware of the problem and fighting back. If you have this tendency, you should fight it back as well.

(Image source: "Single Combat to be decided by the judgement of God." From a miniature in the "Conqêtes de Charlemagne," a Manuscript of the Fifteenth Century, in the National Library of Paris. Internet Archive Book Images/Wikimedia Commons/No Restrictions)