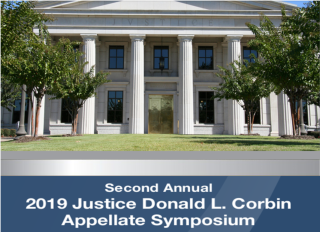 One of the first presentations I watched at the Corbin Appellate Symposium this week was a talk by a panel of federal appellate judges. "I always like the ABC's in my briefs: Accuracy, brevity, and clarity"--that from Tenth Circuit Judge Mary Briscoe. Judge James Graves, from the 5th Circuit, chimed in: "mine is almost the same! Brevity, clarity, and honesty." After the judges talked about some nuts and bolts for a while, the third member of the trio, Sixth Circuit Judge Jane Stranch, launched into a moving discussion about how far our profession has fallen in the civility department: "attorneys are proud to say they use 'scorched earth advocacy.'" "Choose to be civil; expect others to be civil."

I had heard about the Corbin Appellate Symposium--an event that brings together practitioners, judges, and professors from around the nation to talk everything appellate. It sounded great: World-class speakers, fascinating topics, and a charming Arkansas setting.

But it was so much better in person.

I was lucky enough to be invited to speak at the symposium this year. And this is one of the best conferences I've ever been to. I didn't even make all of the talks, and I learned tons. The bench of presenters (no pun intended) included judges of every variety--state and federal, trial and appellate--which would have been incredible enough on its own. But then pile on folks like Wake Forest's Abigail Perdue (whose talk I missed but heard wild raves about!), How Appealing's founder Howard Bashman, and Williams & Connolly's SCOTUS powerhouse Kannon Shanmugam, and you have something quite unique.

For those of you who missed out, I thought I'd share just a few of the many nuggets of wisdom that the presenters gave us (if you were at the symposium--feel free to shoot me your own and I will add them, or leave a comment!).

Several of the judges lamented how uncivil many attorneys are today. They squabble, lob personal attacks--and often right in front of the judges. This kills your credibility, and your credibility matters when you're asking a judge to listen to you (something I talked about a bit in my talk, too). "Just don't say anything rude about your opponent," said Judge Stranch.

Judge Stranch deserves a special shout-out here. Her passion for civility and educating the bench and bar was obvious. She is deeply concerned about engendering respect for the courts and our profession. This is a topic we all need to be thinking about more.

Be honest and accurate

Several judges and other presenters talked about why lawyers must be meticulously accurate and honest. "The worst thing you can do is lie to us--misrepresent a case or fact," said Judge Briscoe. Other judges agreed: "We are going to check every one of your cites, so you are just going to hurt yourself."

We law profs tell our students why they need to be meticulously accurate and honest, but they don't always believe us. Exaggerating a case or fact is not worth tanking your appeal. Listen to the judges.

Be brief in your briefs

"Use words that cover more ground than they occupy," that gem from Judge Graves. Nearly every judge that I heard from said something about why advocates need to be concise. Nothing new here, but always a helpful reminder. "More is not always better," said Judge Robert Gladwin of the Arkansas Court of Appeals.

Judges talked about how taxing long briefs are and why attorneys are doing themselves a disservice by dropping tomes on their judges: "Don't spend 60 pages of briefing [on small issues]."

Judge Lucinda Jesson of the Minnesota Court of Appeals said that she "loves charts, diagrams, and tables." She said that her court even uses an occasional image in their own opinions. "Timelines are great!" said another judge.

Several judges agreed that visuals help them break down complex facts or issues. I heartily agree that visuals are powerful and underused in legal writing (especially from a cognitive science perspective). I hope that judges will continue to encourage lawyers to think about creative ways to present tough information in graphics that can do the job better.

Introductions can win the day

This was one of the main themes of my own talk: beginnings matter. I also talked about the topic at length recently here. It was good to hear several of the judges mention how important first impressions and beginnings matter--both in brief writing and in oral argument. For example, one judge said that when she takes the bench, the only part of the briefs she brings with her is the summary of the argument.

Relatedly, several speakers talked about how the attorney's choices about which arguments to present and highlight influence the judge's thinking about the case. Judge Graves mentioned that he pays attention to which arguments an attorney chooses to focus on in oral arguments: that tells him what the attorney thinks is most important.

Other judges complained about attorneys who include a dozen or more arguments in their briefs: don't "use shotgun appeals," said Judge Jesson. Focus the judge on your "best two or three issues."

Several of the judges said that they are using iPads and other technology to help them do their job. So I think the takeaway there is that lawyers need to think about how their briefs (and even their supporting evidence or record) will appeal on screens big and small.

Judge Michael Brown, from the Arizona Court of Appeals, opened my eyes to how tech-savvy some courts are getting. His court aims to have all attorney's briefs hyperlink their fact cites within the next two years. So instead of spending hours tracking down support in the record, judges and clerks can be instantly transported to the pincite in the record with a click of a button. All I can say here is: wow. These sort of tools have been a long time coming, and it's incredible to hear that courts are working on initiatives like this.

Judge Brown also talked about other technology that his court is working on, like better tools for colloborating during the drafting process.

Many of the presenters mentioned how important the factual story is, and why attorneys should be careful in how they present that story. "Your statement of the facts should include everything relevant to the issues, presented in a clear and understandable way," said one judge.

Several presenters agreed: "footnotes are the exception." "Argument that you want us to read should not be buried in a footnote," said one judge. Hopefully this comes as familiar advice, but it's constantly ignored so always worth mentioning.

The best practices shared were mostly oldies but goodies:

In closing, a heartfelt thanks to everyone that put on this event, including among many others, Judge Herb Wright, Whitley Hobbs, and the Corbin family.