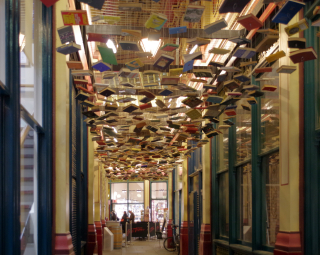 As appellate writers, we are painfully aware of the fact that our readers aren’t terribly fond of our work product. Judges tell us that our briefs are simply tools, and that they are tired of trudging to chambers with boxes (or ipads) full of briefs that are too wordy, too obscure, and just too painful to read to be of much use. Judges, meanwhile, are accused of writing opinions that are too wordy, too obscure, and inaccessible to anyone but other attorneys.

It is understandable, then, that legal writers both on and off the bench try to liven things up. Like Ralphie in A Christmas Story, lawyers dream of turning in a piece of writing that, through shear skill, will temporarily lift our readers from their depression and convince them to joyfully deliver us our (client’s) wishes.

The use of literary allusion can help us make our writing more lively and informative. Allusions can build our credibility, illustrate the rightness of our position, and make our writing more accessible. But it is a two-edge sword: If used poorly, it can cause the reader to lose what little interest they had in our argument and even obscure our meaning.

Literary allusions can be very effective tools in legal writing.

The use of literary allusions is not universally praised. Indeed, Judge Posner, in his articles and book on the subject, Law and Literature, considers literature of little use to jurists, other than to serve as examples of good writing style. Nevertheless, most persuasive writing experts would argue that there are good rhetorical reasons to use literary allusions.

First, reference to “great” works can enhance the moral authority of the writer. Merely referencing Homer, Shakespeare, or a religious work such as the Bible, can confer some of the moral authority and weight of those works to the author. It can also demonstrate that the author is well read, and thus all the more to be trusted.

Second, quotations from literature can tie the emotion of the quoted work to the legal argument, invoking pathos. We are all taught to write narratively, because we are all storytellers and listeners by nature. Tying our characters to those of a great work ties the emotions inherent in those works to our characters.

Finally, allusion can help tie together a legal argument by way of illustration. There some general propositions that are difficult to state under stare decisis, but which seem immediately right when viewed through the eyes of literature. Thus, Aristotle invoked Sophocles’ Antigone to support his argument that respect for the dead is a universal law, as did Justice Kennedy, over 2000 years later. See Nat’l Archives & Records Admin. v. Favish, 541 U.S. 157, 168 (2004).

Make sure the allusion agrees with the law.

Justice Oliver Wendell Holmes wrote in his famous essay, The Path of the Law, “[t]he law is full of phraseology drawn from morals, and by the mere force of language continually invites us to pass from one domain to the other without perceiving it, as we are sure to do unless we have the boundary constantly before our minds.” 10 Harvard L. Rev. 457, 469 (1897). These boundaries have often been made apparent when allusions to moral works conflict with statutory sentencing schemes.

For instance, the Fifth Circuit had to step in and correct a criminal defendant’s sentencing when it was based on reference to Dante’s circles of hell rather than the sentencing guidelines. See U.S. v. Andrews, 390 F.3d 840, 850 n.23 (5th Cir. 2004) (“The district court seems more comfortable with sentencing Andrews based on Dante’s levels of hell, but such a sentencing scheme has not been accepted as the law in this or any other federal circuit.”). Dante’s opinions notwithstanding, it was the duty of the court to apply the law, not literature.

Nevertheless, there are times when literature can inform the sense of justice upon which the law is built. Thus, the Seventh Circuit permitted a judge to rely (in part) on Dante’s Inferno in refusing a federal prosecutor’s recommendation to depart downward from sentencing guidelines because, even though the refusal to depart was stated to be based, in part, on literature rather than law, this was merely a reflection of the discretion vested in the trial judge by the guidelines. See U.S. v. Winters, 117 F.3d 346, 348, 350 (7th Cir. 1997).

The lesson? Literary allusions can lend force to a legal argument, but they should not supplant it.

Let the reader discover the allusion.

It is often best to let the reader discover the answer themselves. This is particular true with allusions. A quotation often will have less force than the sudden recognition that you are inviting the reader into the argument based on their own experiences.

Bryan Garner, in his A Dictionary of Modern Legal Usage, gives an excellent of example of subtle allusions in legal writing. He cites to the dissent of Justice Robert W. Hansen of the Wisconsin Supreme Court, in Jones v. Fisher, 166 N.W.2d 175 (Wis. 1969) where he wrote: “The road that has brought us to the present state of affairs in regard to punitive damages in Wisconsin courts is a long one, paved with good intentions.” Id. at 182. As Garner notes, this formulations subtly suggests that the line of authority is a road to hell, allowing the reader to reach that conclusion themselves. Had Justice Hansen stated the aphorism directly, it would have been less effective.

Be sure the reader will recognize the allusion, or can understand the point if not.

When we communicate with someone, there is much more being communicated than the words we choose. We are also communicating through filters, and those filters include our shared experiences. Literary allusions, at their best, add to our communications through reference to the experiences writer and reader share in having read the same works.

In using allusions, then, we need to be careful not to obscure the text for the reader who is not familiar with the work. That was the conclusion of the late, great, Charles Alan Wright, when he concluded that it was safe to use allusions in briefs and other legal writings only so long as the text is intelligible even if the reference is not understood. See Literary Allusion in Legal Writing: The Haynsworth-Wright Letters, 1 Scribes J. Legal Writing 1 (1990).

Wright’s example leading to this conclusion is instructive. Wright was taken by the use of Justice Friendly of a reference to a “legal Lohengrin,” because it captured the essence of his legal argument so well by comparing an obscure statute to the character from a Wagnerian opera who depended on the obscurity of his own identity. Judge Haynsworth responded, however, by noting that the reference was itself obscure, and asked: “Should a judge write for the Charlie Wrights or for young law clerks preparing legal memoranda for the use of junior partners in advising clients?” Id.

We should keep the same question in mind. Particularly in a multi-cultural world with changing educational standards. Feel free to use allusions, but err on the side of caution when it comes to obscure ones, and be sure to sufficiently explain yourself to those who do not share the same reading experience.

Take a note from Justice Ginsberg, who made a Biblical allusion without any expectation of biblical scholarship, and then explained exactly what she meant:

No man can serve two masters. If you are negotiating a contract, a lawyer does not represent both clients. That is all that is involved here.

Sometimes allusions can draw the sting out of a rebuke

Finally, I leave you with an allusion born from kindness. There are times when an appellate court has to note a clear mistake made by the lower court, or, worse, an appellate attorney must point out an error made in the law that seems apparent in retrospect. Let me introduce you to a literary allusion that can help you make such a point while actually complimenting the party that made the mistake.

Homer, the author of the Iliad and the Odyssey, two foundational works that should still be at least recognizable to our readers, was known to make mistakes. Indeed, Homer killed a character earlier in one of his texts and then used the same character later, fully alive, in apparent error. This led the Roman poet Horace to write that “even the noble Homer sometimes nods.”

Now, telling someone they made an obvious error is a delicate task. Comparing them to one of the most famous authors of all time while doing so, however, draws the sting a bit.

When Justice Cardamone was tasked with telling the district court judge that the Second Circuit had already set out the law of the case in a prior appeal, and that law had not been followed, he used this literary reference in his opening:

When one of the cases of this consolidated appeal was before us seven years ago, we set out some guidance on the law, which the district court [sic] either misinterpreted or missed. If the latter, such forgetfulness is understandable because we know that even Homer nodded.

While some judges might disagree about the effectiveness of literary allusion, I doubt anyone would complain about being corrected in this gentle manner.

Paragraph 2, line 2: "shear" should be "sheer". Unless you meant skill as a shepherd.