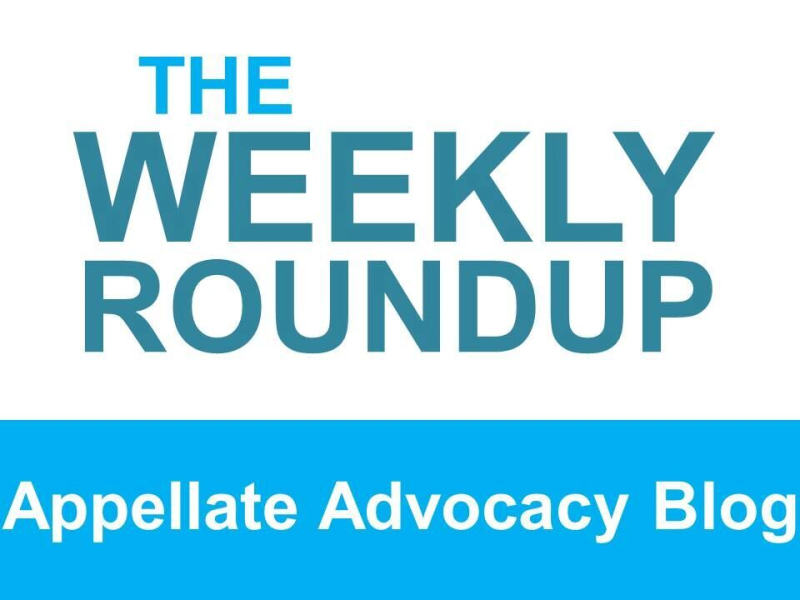 Each week, the Appellate Advocacy Blog Weekly Roundup presents a few tidbits of news and Twitter posts from the past week concerning appellate advocacy. As always, if you see something during the week that you think we should be sure to include, feel free to send Dan a quick email at DReal@Creighton.edu or a message on Twitter(@Daniel_L_Real). You can also send emails to Danny Leavitt at Danny@tsalerno-law.com or a message on twitter @Danny_C_Leavitt.

Ruth Bader Ginsburg said she will stay on the Supreme Court for "at least five more years," comparing her age in five years to that of Justice John Paul Stevens when he stepped down at the age of 90.

On Tuesday, July 31, 2018, the Supreme Court became an eight-member court (for now), as it was Justice Anthony Kennedy's official last day on the Court. The article by Lyle Dennison discusses what retirement might hold for Justice Kennedy. As a reference, here is the letter Justice Kennedy sent announcing his retirement to President Trump.

In case we missed it, the 9th Circuit Court of Appeals held that the Second Amendment protects rights to openly carry a loaded firearm outside the home for the purpose of self-defense.

Eugene Volokh has this piece on the development and increased use of the parenthetical "(cleaned up)," which has been interpreted as "internal quotation marks, brackets, ellipses, and citations omitted." It should be noted that Eugene's article recognizes attorney Jack Metzler (@SCOTUSPlaces) for his proposal of the citation's use.

Bryan Garner's (@BryanAGarner) ABA Journal article this month is about striving for clarity and context when presenting research in emails.

A UVA law student obtained an assignment to argue in the Fourth Circuit, and a small twitter discussion followed about pointers for one's first oral arguments.