The Art of Legal Writing: The Sentence 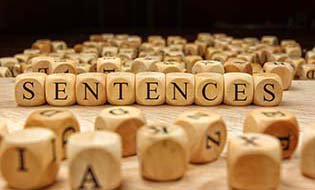 Unlike the neglected stepchild of writing (the paragraph), sentences get plenty of attention. Dozens of books tell you how to write the "perfect" one. Dozens more try to convince you that the "perfect" sentence doesn't exist. Heck, you can probably get a PhD in the "study of sentences" (I don't know if that's a real thing, but it could be).

The sentence is a real powerhouse; it's true. When we think of great writers, we often remember their greatest sentences. Take Abraham Lincoln. Maybe you recall a couple of his most memorable sentences. Perhaps this one, which seems as relevant today as it was in the 1800s:

Sentences can make your reader experience things. I dare you not to cringe as you read this sentence from Penelope Lively:

The pavement rises up and hits her. Slams into her face, drives the lower rim of her glasses into her cheek.

The pavement is nearly alive, reaching out and slapping you. There is a real power in learning how to write sentences that impact people like this, especially for lawyers.

But the topic of good sentences can be overwhelming. It's the stuff of Lincoln and Oliver Wendell Holmes. Writing good sentences can seem like an art that only artists do well. First you must attend a silent retreat in a cabin deep in the woods; second, write sentences over and over until the trash can overflows with discarded drafts.

And there is so much advice about how to write sentences that you may just want to give up on the whole endeavor. Better to just rely on your good ole' sentence rules that you picked up in college (always write in the active voice, and always avoid long sentences).

But consider spending some more time with our friend the sentence. You need not be T.S. Eliot to write exceptional ones. You just need to practice. You aren't going to play the piano in a week, and you aren't going to write great sentences in a week. But there are techniques to learn. And there are sentence-structures to practice. And if you set aside some time to work on your sentences, they will improve. And pretty soon, they will shine.

One type of sentence technique that you can drill is sentence forms. I love the "apositive cluster" form, which involves using a cluster of examples to illustrate a concept:

Another favorite is the "echo word" form, which connects ideas by a common hub word:

Or an implied verb form:

These are just a few examples of the many, many sentence forms that you can learn. And each has its uses.

Then there are more fundamental sentence techniques. Here are five from some reputable sources (including the work being done in cognitive science and readability). There are many more you should learn--for example, verbs requires an entire article of their own--but these are a good start.

Avoid intro phrases that aren't needed. They waste your reader's attention and make your sentences a burden:

“Without any need whatsoever, lawyers continue to open their mouths.”

Start with short words if you can. Short words want to be read. It was true when you were six and it's true now:

Being funny is not part of lawyering. Additionally, a “funny lawyer” is impossible as a matter of physics.

Being funny is not part of lawyering. And a “funny lawyer” is impossible as a matter of physics.

Start your sentences with words that your reader knows something about. Familiar words feel comfortable; new words scare them away:

“Courts hate word vomit. But word vomit is something you can fix.”

Second, pay attention to the end of sentences. The end is emphasized; it's what your reader remembers. So put at the end what you really want your reader to remember. Watch how changing up the ends of these sentences shifts which idea is emphasized:

Third, avoid multiple clauses, but if needed, prefer a subordinate or relative sentence structure. Each additional clause imposes a cost on your writing flow (and your reader's attention). Very skilled writers can guide a reader through even the most complex set of clauses without a hitch. But most of us aren't there yet. Much better to keep things simple until you have the writing chops to start lining up your sentences like train cars, one idea after the next:

Jory, without knowledge of who the victim was, and without knowing why he was doing so, slapped Joe.

Jory slapped Joe without knowing why he was doing it or who his victim was.

Sometimes you need multiple clauses to explain things clearly. If so, opt for structures that smoothly communicate how each clause relates to the other--subordinate or relative structures.

I won't belabor the technicalities, but when I say subordinate or relative, I mean that you should try to show the relationship between the clauses in an obvious way.

For example, you could say:

“The judge granted the silly motion, and the lawyers were atrocious.”

In that structure, you are telling your reader two things (the judge granted a motion and that the lawyers were bad), but you aren't explaining how those two ideas relate to each other. If there is no relationship between the clauses, you should probably use separate sentence.

But if the relationship matters, show your reader from the outset:

“Even though the lawyers were atrocious, the judge granted the silly motion.”

“Substituting one decision maker for another may yield a different result, but not in any sense a more ‘correct’ one. So too here.” –Justice John Roberts

Finally, be thoughtful about the subjects you choose and where you put them. Who sits in that subject position matters. Opt for subjects that people can visualize or connect with, like people or things; try to ensure the subject is in the first five or six words of each sentence, lest your reader get lost; and start at least a third of your sentences with the subject.

“The search was conducted several times, but no contraband was revealed.”

“Making sure their bills were paid first, the attorneys filed the motion.”

“The attorneys made sure their bills were paid—then filed a motion.”

If I've convinced you of nothing else, I hope you at least agree that great sentences are within your grasp. Now go start your own sentence adventure.

Joe Regalia teaches at Loyola University School of Law, Chicago and practices at the firm of Sidley Austin LLP. The views he expresses here are solely his own and not intended to be legal advice. Check out his other articles here.