Does the Shape of the Supreme Court's Bench Affect Oral Argument?

In a recent SCOTUSblog post, Andrew Hamm discusses a fascinating new article in the Journal of Supreme Court History by political scientists Ryan Black, Timothy Johnson, and Ryan Owens. Soon after his confirmation as Chief Justice in 1969, Warren Burger toured the Supreme Court building with his clerks and the Court Marshal. In the courtroom itself, the chief justice stood at the lectern and reminisced about his oral argument to the Court, noting that the justices kept interrupting each other. This happened, he surmised, because the justices could not see or hear each other well. And the situation could be fixed "by curving the bench so each justice could see his colleagues."

The idea was not new: in the 1950s, Court staff assembled a prototype of a curved bench in the Supreme Court gymnasium: 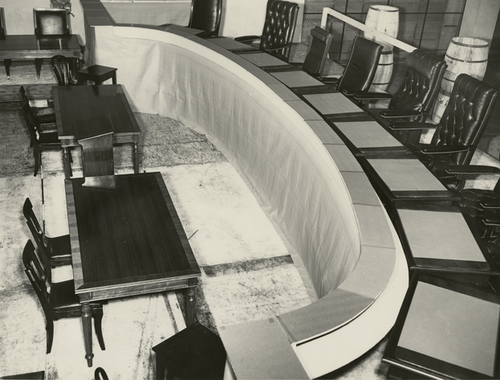 But Chief Justice Burger followed through. Early in 1972, carpenters carved the existing bench into three segments and turned the outer segments in enable the justices -- particularly the junior justices sitting at either edge -- to better see and hear each other.

So did it work? Science says yes. Black, Johnson, and Owens compared instances where justices interrupted each other in the ten years terms before and the ten terms after the modification of the bench. Result: the justices interrupted each other less frequently on the winged bench. And the effect was most pronounced on the flanks: the junior justices on the edges of the bench were interrupted far less frequently when they and their colleagues could better hear and see each other.

Two takeaways from this piece:

First: it underscores the value of the Oyez Project. The authors note that theirs was the first large-scale empirical analysis to use individual-justice-level oral-argument data for terms prior to 1998. That is because SCOTUS transcripts used to generically tag all remarks by justices as "question" without identifying which justice asked the question. The good folks at Oyez have painstakingly analyzed audio recordings of SCOTUS arguments dating back to 1955 and updated the transcripts. And research like this is now feasible.

Second: the authors include an excellent analysis of the value of appellate oral argument as a discussion among justices. Obviously, oral arguments rarely feature direct dialog between justices (or judges). But, as experienced advocates know well and as Justice Kennedy explains, the court often "has a conversation with itself through the intermediary of the attorney." And, as Chief Justice Rehnquist explained in The Supreme Court, “The judges’ questions, although nominally directed to the attorney arguing the case, may in fact be for the benefit of their colleagues. A good advocate will recognize this fact and make use of it during his presentation."