Lessons from the Carpenter oral arguments: SCOTUS echoes with [laughter]

I'm no Orin Kerr, but I've been pretty obsessed lately with United States v. Carpenter, this term's blockbuster Fourth Amendment-meets-technology case. It's a fascinating case, and it features outstanding advocates addressing important issues (and it makes for a nifty moot court problem). So I figured today I'd get the transcript, pore over it, and identify some great moments that let me say useful things about advocates doing advocacy.

There definitely are such moments. Interesting exchanges. Justice Gorsuch sharply pursuing a property-interest line of reasoning. And, most of all, the remarkable Michael Dreeben spinning out elegant prose on the fly.

But what struck me first was the laugher. Or, in SCOTUS, the [laughter]. Apparently, cell phones bring out the funny in the justices.

I shouldn't be surprised by this. Talking about Cell Site Location Information allows the justices to mine rich veins of I'm-a-wizened-person-with-life-tenure-and-I-don't-know-how-these-gizmos-work humor. And that's what Justice Kennedy did with the day's first [laughter]: 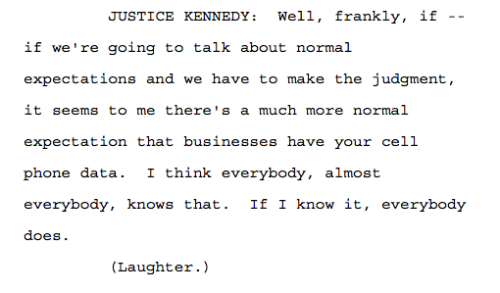 OK, so these are not the funniest jokes in the world. But they are, like, legit jokes. And that is not the norm for Justices Kennedy and Sotomayor. They are not humorless folk, but they never rank highly in Jay Wexler's groundbreaking studies of SCOTUS humor. Today's yuk fest means that Justice Sotomayor finally opened up a gap between herself and Justice Thomas in this term's [laughter] count. Justice Kennedy gets in the occasional self-deprecating quip, but his funniest SCOTUS moment before today was when he played straight man for Justice Scalia in the great "What's a footman?" routine of '07. These justices are not Justice Breyer, who can bring down the house with a well-timed utterance of "Limburger cheese."

Maybe [laughter] will unite the justices. And all of us, every one.