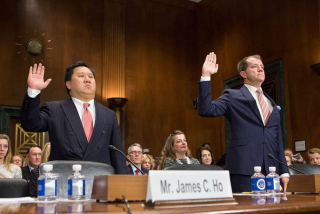 Each president makes his (and hopefully someday her) mark on the federal judiciary.  President Trump has been no exception.  In addition to the nomination and confirmation of Neil Gorsuch to fill the vacancy on the Supreme Court caused by Justice Scalia's death, President Trump has nominated 18 individuals to fill vacancies on the federal appellate bench. Eight of President Trump's appellate nominees have been confirmed by the Senate. According to the New York Times' Charlie Savage, that number of confirmations is "the most this early in a presidency since Richard M. Nixon."

Savage's article on Trump's appellate confirmations, recounts how weeks before President Trump took office, the incoming White House counsel met with other attorneys to craft a "secret battle plan to fill the federal appeals court with young and deeply conservative judges." The Republican-controlled Senate appears on board with the president's efforts. It has been holding confirmation hearings approximately every two weeks according to the Senate Judiciary Committee's website.  Just last week the Committee consider the nominations of Justice Don Willett and James Ho to serve on the United States Court of Appeals for the Fifth Circuit.  Justice Willett, who has served on the Texas Supreme Court since 2005, is well-known as the "Tweeter Laureate" of Texas.  James Ho, a well-respected appellate attorney, served as the Solicitor General for Texas.

The decision by Senate Democrats during the Obama Administration to eliminate the filibuster has made things easier for Republicans. As Savage reported,

Republicans are systematically filling appellate seats they held open during President Barack Obama’s final two years in office with a particularly conservative group of judges with life tenure. Democrats — who in late 2013 abolished the ability of 41 lawmakers to block such nominees with a filibuster, then quickly lost control of the Senate — have scant power to stop them.

While most of President Trump's nominees have strong academic credentials, Savage reports that they are not particularly diverse.  According to Savage, "Of Mr. Trump’s 18 appellate nominees so far, 14 are men and 16 are white."

If Republicans maintain control of the Senate and President Trump keeps up the nominations, his overall impact on the judiciary could be profound.  As Savage explained, "nearly half of the 150 active appeals court judges are eligible to take senior status — semiretirement that permits a successor’s appointment — or will soon reach that age, according to Russell Wheeler, a Brookings Institution scholar."  At the start of President Obama's time in office, that number was at a little more than 27%.