The advocacy of "the greatest lawyer of the 20th century" 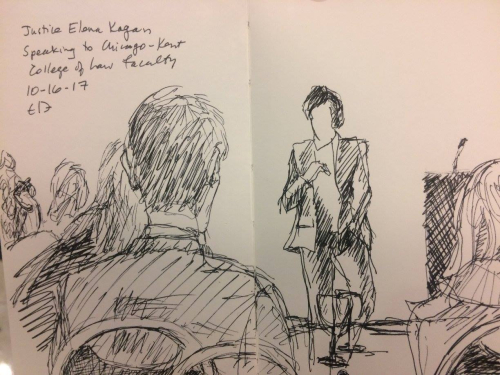 My law school was fortunate to welcome Elena Kagan earlier this week. (The artist's rendering above is the work of Professor Evelyn Brody.) During a delightfully wide-ranging conversation with Professor Carolyn Shapiro, Justice Kagan took a firm stand on one point: her former boss Thurgood Marshall was "the greatest lawyer of the twentieth century."

No one argued with that. 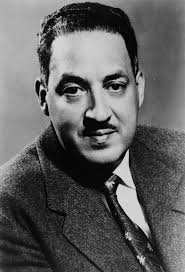 As Justice Kagan noted, we mostly remember Thurgood Marshall, attorney at law, as an appellate advocate, though that might change with the release of the film Marshall, which focuses on his trial work. He is, of course, most celebrated for his work in the Brown v. Board of Education cases. And his advocacy led to key victories in the decade-plus before Brown: in Murray v. Pearson, a groundbreaking Maryland desegregation case; in Shelley v. Kraemer, a landmark case striking down racial covenants; in the Brown precursors Sweatt v. Painter and McLaurin v. Oklahoma State Regents; in dozens of other cases.

To spell out the obvious: there is substance to Marshall's legend. The records of his appellate oral arguments provide ready confirmation of this. It's worth reading in full the transcripts of his oral arguments in Briggs v. Elliott, one of the consolidated Brown cases.  In the original 1952 argument and rebuttal (pdfs), Marshall elegantly handles active questioning from skeptical justices (Reed and CJ Vinson, who reportedly favored upholding the school boards' practices)  and genuinely torn justices (Frankfurter and Jackson, who were sympathetic to the claimants but true believers in judicial restraint). In the 1953 reargument, Marshall offers a rich oral treatise on the Fourteenth Amendment. And his rebuttal is a remarkable closing argument. I won't paste an excerpt here because an excerpt won't do it justice. Trust me: click here; scroll to page 20; start reading the paragraph at the bottom of the page that begins "[t]he argument of judicial restraint has no application in this case"; keep going until you hit "[t]hank you, sir." Ethos, logos, pathos.

I'd also recommend listening to Solicitor General Marshall's oral argument in United States v. Price, the Mississippi Burning case. Unlike in Briggs/Brown, he's not addressing skeptical or torn justices: he draws only two soft questions from a Court that ultimately ruled unanimously in his favor. So he generates his own momentum: in key segments of his argument, he serves as his own interlocutor, asking sharply-composed questions and offering sharply-composed answers. It works remarkably well; his assurance and comfort in his own skin are a palpable force.

Sounds like it was a great speech by Justice Kagan (no surprises there). I look forward to seeing the video when it is posted.